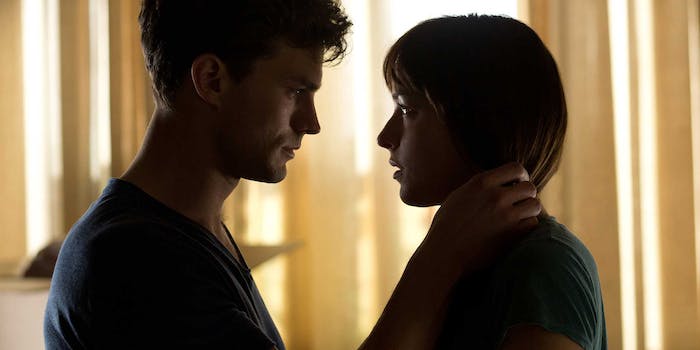 Now you can experience the steamy, twisted lovemaking from a different angle.

E.L. James is back to save the publishing industry once again, announcing a spinoff from her massively successful Fifty Shades novels.

Grey will retell the story of Fifty Shades of Grey from Christian Grey’s perspective, which is sure to please the throngs of readers who can’t get enough of the original trilogy. James shared the book’s cover art on Instagram on Monday and revealed that it will be published on June 18.

Hello all. For those of you who have asked, Christian's POV of #FSOG is published on 18th June for his birthday. It's called GREY… I hope you enjoy it. #FiftyShades #Grey

James then posted a press release on her blog, in which she says, “Christian is a complex character, and readers have always been fascinated by his desires and motivations, and his troubled past. Also, as anyone who has ever been in a relationship knows, there are two sides to every story.”

This book may signal a new trend for writing alternative-POV spinoffs of popular series. Stephenie Meyer originally planned to write an Edward-centric retelling of Twilight (the inspiration for the Fifty Shades books), although this was scrapped after the first 12 chapters were leaked. In 2013, Divergent author Veronica Roth published a series of short ebook stories from the perspective of Four, the protagonist’s main love interest in the Divergent series.

This idea of retelling familiar stories from another perspective has long been popular in the world of fanfiction; as expected, it has only reared its head in professional publishing when linked to a guaranteed bestseller. Fifty Shades‘ passionate fanbase is an ideal test market for this concept, as James is probably correct that there’s a huge audience of people eager for more insight into Christian Grey.