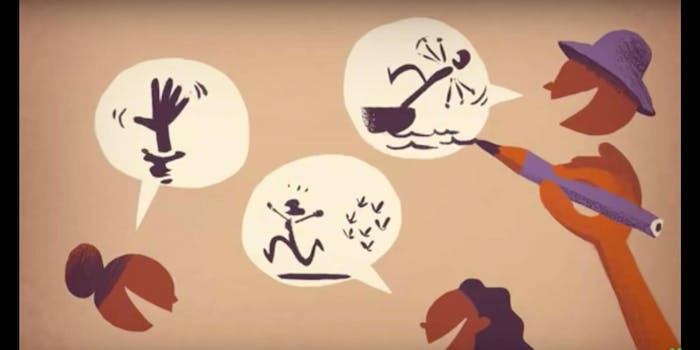 He aims to show the human side of science.

Last year, the Daily Dot shared some of the best tweets from scientists who took to Twitter to talk about their fails in the field under the hashtag #fieldworkfail.

Accidentally glued myself to a crocodile while attaching a radio transmitter. #fieldworkfail

Though part of what makes the tweets so funny is the lack of context, one artist dug deeper. In his upcoming book, French illustrator Jim Jourdane asks scientists for the stories behind the tweets and pairs them with whimsical illustrations and informative storytelling. The book, titled, “Fieldwork Fail: The Messy Side of Science,” recently lapped its funding goal on Kickstarter.

“[Reading the book] could make science closer and more human,” Jourdane said in an email to the Daily Dot. “I think talking about mistakes helps to put science into the hands of everyone and demystify the work of scientists.”

Jourdane said the book is geared toward pretty much anyone and everyone over the age of 8. He noted a story he read about how teens are more likely to relate to scientists if they hear about their failures as well as their successes.

The book is structured with the tweet underneath Jourdane’s image of how the story might have looked in real life. On the facing page, he lists several facts about what the scientist was studying and how they go about studying it.

Jourdane said he drew from his experiences as an illustrator and animator for children’s media. He is used to using a visual medium to explain complex ideas. But he said it was a rewarding challenge doing this with science.

He also has a blog where you can follow along with the book’s progress and see some illustrations.