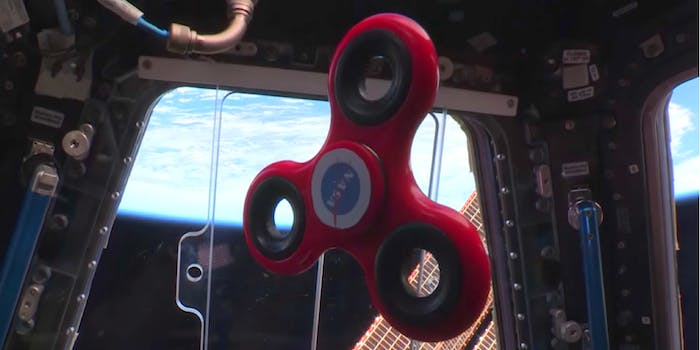 One small step for fidget spinners...

Just when you thought the fidget spinner craze was over, astronauts in the International Space Station have reminded the internet that we still haven’t brought the viral “stress-reducing” toys into the final frontier.

On Friday, NASA astronaut Randolph J. Bresnik shared a video of the crew playing with one NASA-branded spinner in space, writing on Twitter, “A fidget spinner in space! How long does it spin? I’m not sure, but it’s a great way to experiment with Newton’s laws of motion!”

Somehow the object looks even more mesmerizing in near-frictionless zero gravity, not to mention how sci-fi-esque it looks to see a fidget spinner twirling around with Earth’s beautiful blue atmosphere glimmering in the background.

As the spinner rotates furiously, the space station’s astronauts each take turns holding onto its core, showing the laws of motion in play as the spinner transfers its momentum to themselves. Or, for as fast as they’re spinning, they really could just be messing around. Bresnik didn’t include an explanation of this phenomenon, and I’m not a scientist, so who’s to say?

However, that doesn’t make the video any less cool. Watch their full “experiment” below: