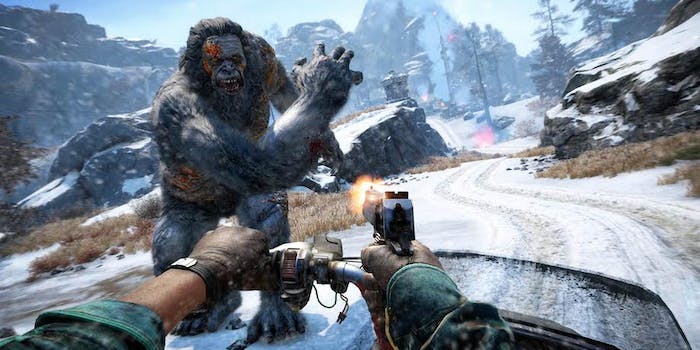 Battle snow monsters in Far Cry 4 Valley of the Yeti

The new 'Far Cry 4' DLC makes for a stimulating endnote to this harsh winter season.

The rule of thumb with post-release content is that DLC is typically only as good as the game that spawned it.

Such was the case for the mediocre Dead Kings adventure for Assassin’s Creed Unity as well as the new stories that added more play time to Watch Dogs. There is the rare DLC that is so well crafted, some prefer it over the main game, like The Last of Us: Left Behind. Far Cry 4 Valley of the Yeti builds upon an already solid foundation set by the excellent Far Cry 4, which itself was built on the success of Far Cry 3. 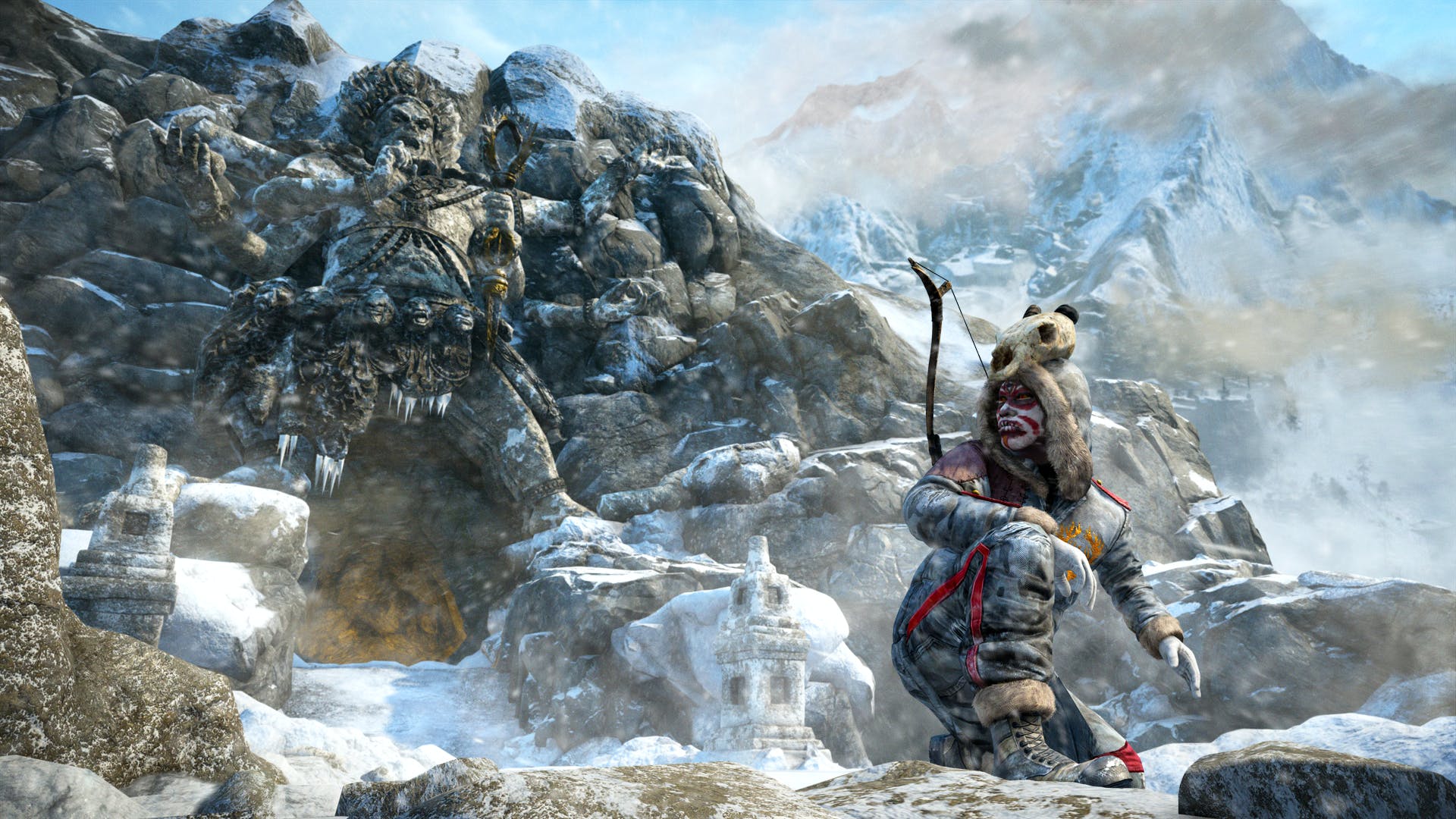 Valley of the Yeti is in that specific DLC category that requires the main game but operates as a standalone quest. Ajay is still the protagonist in the fictional Himalayan region of Kyrat, though his new predicament is reminiscent of Liam Neeson-versus-wolves film The Grey, just with notably less dire odds.

Ajay, now a survivor of a helicopter crash, starts out with nothing, but it takes less than 10 minutes to get adequately rearmed. In keeping with this DLC’s standalone design, Ajay starts at zero in all aspects of his abilities and resources, including cash and crafting items. His empty dual-skill tree resembles the one from the original game, though don’t expect to a playthrough of the same length to fill up both trees. Given that there are only six main missions, clearing just one assignment will give you enough points for multiple ability upgrades. Starting from scratch means that hardcore Far Cry 4 players won’t find Valley of the Yeti to be too easy and unsatisfying. You could very well call this a brand new Far Cry game, even if it is a bite-sized one. 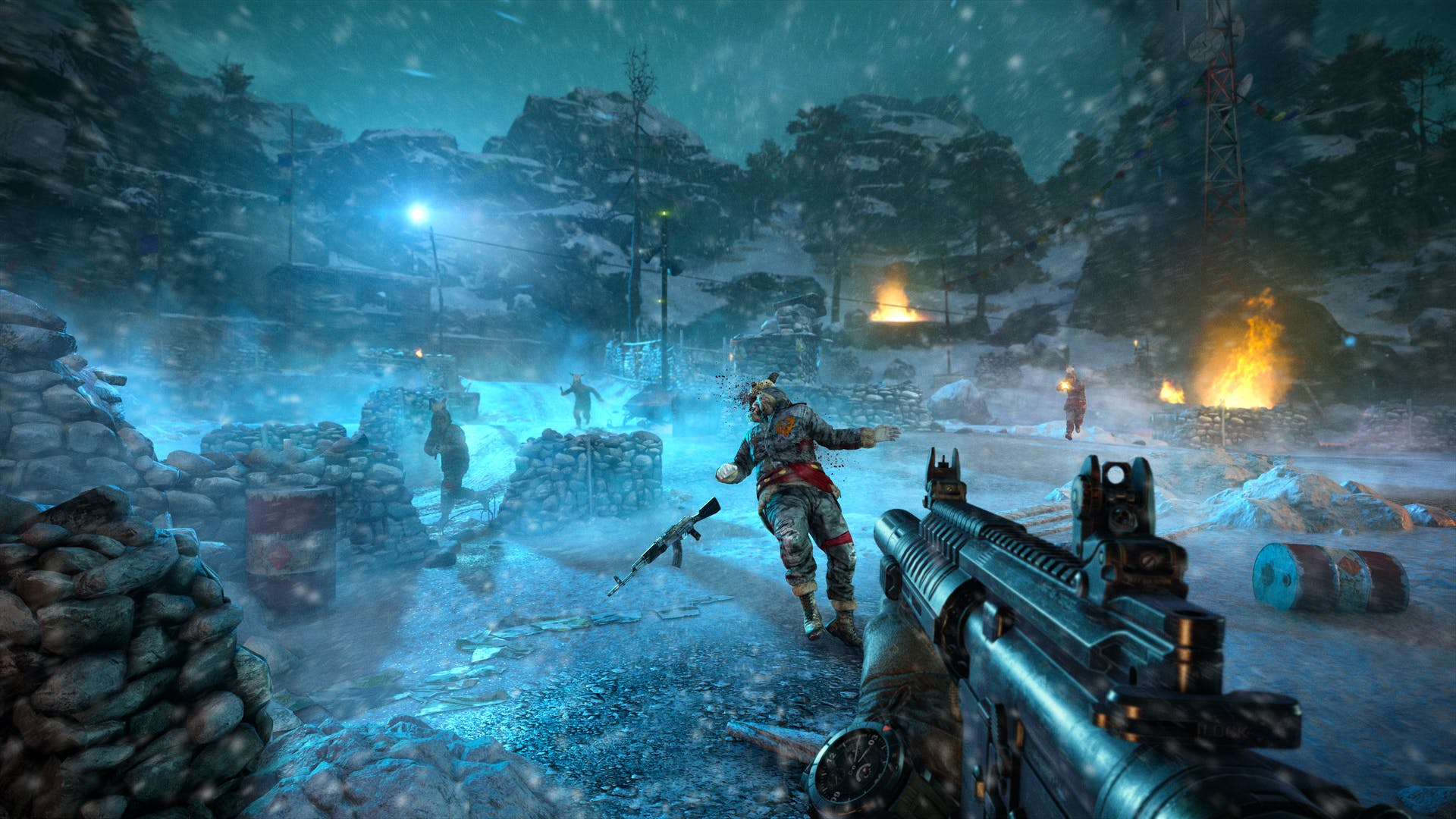 Even if you do start from square one, any ingrained abilities you’ve earned through playing open-world shooters will help you immensely in Valley of the Yeti. This is especially the case during the game’s night waves, which pit you against a series of enemies looking to destroy your base. If you know your way around a first-person shooter in an open space, the first wave will stroke your ego, especially if you know how to read radar and can mix close-quarters gunplay with melee kills. Improvising in battle and using your environment to your advantage never gets old, especially if you manage to survive without respawning. Each subsequent wave gets progressively more challenging, including appearances by the mythical creature from which this DLC gets its name.

I classified Far Cry 4 as the closest thing we have to a first-person version of Uncharted 2: Among Thieves, minus Nathan Drake’s occasional cavalier reaction to peril. Between the fierce gunplay and the myriad opportunities for cliff traversal, Valley of the Yeti maintains this comparison to Naughty Dog’s landmark sequel. In fact, this co-op optional, snow-laden trek induces flashbacks of Drake’s partnership with Tenzin and their trek through Tibetan ice caves. 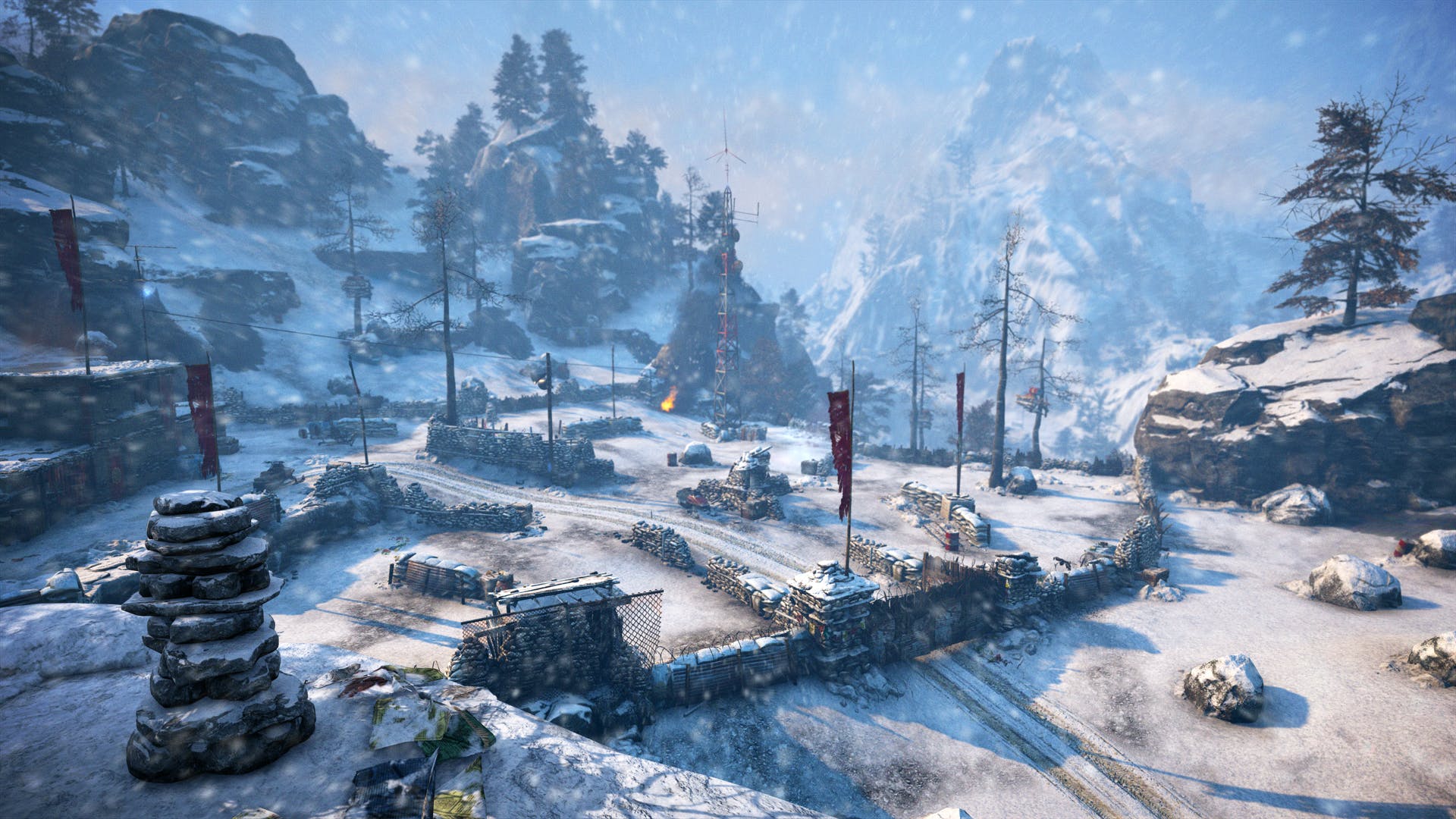 Even if this map is a fraction of the size of Kyrat in Far Cry 4, there’s still a lot of room to move and countless opportunities for emergent gameplay. At their best, the last two Far Cry installments provided a wealth unexpected highlight films worth sharing with friends and on YouTube. There’s equal gratification to be found in executing a well-laid plan, even if it’s something as straightforward as luring a bear into the path of a mine. The bear is not only killed, it’s launched 30 feet from the center of the blast. If you like open-world games in general, you might find that hunting prey with the assistance of binoculars is as pleasurable as running from a blood-thirsty tiger and escaping by leaping off a cliff in a jumpsuit. And there’s nothing like a wing-assisted leap of faith to remind you of the verticality of these recent Far Cry games. This poses challenges for completionists who want to collect all of this DLC’s treasures. Seeing the diamond icon (denoting treasure) is the easy part, but you might be 100 feet above or below the prize. Finding a route up or down becomes its own puzzle.

Like many Ubisoft-developed, story-driven DLCs before it, Far Cry 4 Valley of the Yeti is an unsurprising sampler platter of many of the main game’s worthwhile features. For every minute you might want to spend defending an outpost from waves of attackers, you can spend an equal amount of time satisfying obsessive-compulsive tendencies while hunting down treasure. As an adventure that starts out as a straightforward rescue mission, Valley of the Yeti is a fitting complement to Far Cry 4 and can be enjoyed in tandem with your current playthrough of the main game, no matter far you are.

Disclosure: The copy of Valley of the Yeti used for this review was provided by Ubisoft.