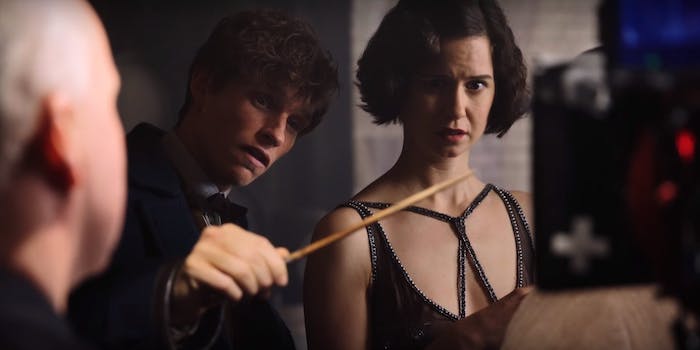 Pottermore is on fire this week.

Pottermore is on fire this week. First J.K. Rowling revamped the sorting hat quiz, then the site revealed new information about four international wizarding schools, and this weekend it posted a featurette from behind the scenes of Fantastic Beasts and Where to Find Them.

The 1920s Harry Potter spinoff comes out in November, with Warner Bros. releasing a couple of tidbits in the form of a brief announcement trailer and some on-set photos.

This featurette video goes a little further, interviewing the main cast members about their place in the world of Harry Potter. For example, we learn that the sisters Tina and Queenie Goldstein “raised each other,” indicating that they probably had a difficult childhood.

Oscar-winner Eddie Redmayne stars as magizoologist Newt Scamander, a young English wizard who travels to New York and promptly loses some of the creatures he was transporting inside a magic suitcase. While this video doesn’t go deep into the Fantastic Beasts setting, we do get a better look at the aesthetic of the film, as well as the slightly jarring appearance of Colin Farrell as an American Auror—a very different casting choice after Harry Potter‘s supporting cast of British character actors.