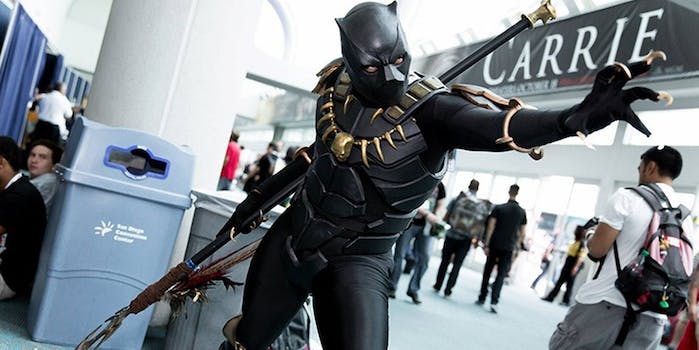 It's been a day of highs—and some lows—for Marvel fans.

It’s testament to just how big the Marvel fandom has gotten that shortly after its much-hyped midday press conference, a joke from the conference was trending worldwide on Twitter.

No, “Serpent Society” isn’t actually going to be the next Captain America movie, but it didn’t stop fans from immediately trending it, along with generally losing their minds over the day’s main event.

Well before the Marvel announcement, promoted with the hashtag #MarvelEvent, got underway, fan speculation was rampant: Was it a new Black Panther or Captain Marvel movie? The much-coveted Black Widow movie? Maybe it was just more info on Ant Man or Doctor Strange? Or perhaps, from the well of wishful thinking, Sony and Marvel had finally joined forces to bring Spider-Man into the Avengers, maybe even starring Donald Glover as Marvel Ultimate Spidey Miles Morales!

The truth was something of a mix of all of the above—well, except for Spidey, because that tangle of rights confusion is too difficult even for Marvel to defray.

Marvel Studios president Kevin Feige opened by dropping bombshell after bombshell upon a giddy crowd and a joyous Internet: Yes, we’re getting Black Panther. Yes, we’re getting Inhumans. Yes, Avengers fans are getting their highly anticipated onscreen adaptation of the famous Civil War arc of the comics.

Oh, and there will be at least two more Avengers films, along with Captain America 3, Thor 3, and Guardians of the Galaxy 2.

The biggest news is good news for advocates of diversity. Just days after The Hollywood Reporter roundly criticized Marvel for its lack of superheroes who aren’t white men, we’re finally getting our first female-led superhero movie and our first black superhero movies from Marvel. Captain Marvel”s Carol Danvers promptly started trending internationally after the announcement. To say fans and other members of the Carol Corps were overjoyed is a major understatement. And perhaps no one was more surprised than Captain Marvel writer and geek girl icon Kelly Sue DeConnick herself.

Did not see that coming.

“@tropicalsteve: Hey, a @kellysue Carol Danvers Captain Marvel movie! I didn’t see that coming. Wow. I’ll be first in line.” No you won’t.

LOSING MY DAMN MIND OVER THE CAPTAIN MARVEL MOVIE ANNOUNCEMENT

She’s gonna be there! And on the big screen! And little girls are gonna see her!!!! 😫😭😭😭 pic.twitter.com/mu9yzIGKjC

Fan speculation quickly turned to casting, and actress Katee Sackhoff, by far the most popularfan choice to play Carol, found her name popping up instantly as well:

Hey @Marvel, @kateesackhoff for Carol Danvers, please and thank you.

The actress has been dropping hints for a while now that something big was in the works, and while we suspect if she’d nailed down Captain Marvel we’d’ve heard about it today, we can’t blame the Internet for bursting into giddy speculation.

Meanwhile, the studio did drop a casting announcement that created a frenzy: Feige followed up the confirmation of Black Panther by announcing 42‘s Chadwick Boseman in the title role. The actor who previously portrayed both Jackie Robinson and James Brown on film also began trending internationally as word of his casting as T’Challa, the African prince turned Avenger, spread through the Internet.

Chadwick Boseman is officially the most important black actor of this generation. Jackie, James and T’Challa? The most immaculate resume.

CHADWICK BOSEMAN AS BLACK PANTHER?! Okay, *that* makes up for Cumberbatch.

I think Chadwick Boseman is one of the few comic-book castings that didn’t have all of nerddom collectively melting down in anger.

But it’s not all rosy, at least for the many fans hoping for a #BlackWidowMovie. Feige all but put the lid on the subject after being asked about the possibility in the follow-up press conference.

“Like Hulk, her role will be in the Avengers films,” Feige said, emphasizing that like her previous role in The Avengers and Captain America 2, she’ll continue to play major parts in the follow-up films in the franchise.

Naturally, the legions of Natasha fans were unimpressed, especially since, well, Hulk has had his share of films—and there’s no She-Hulk film on the horizon either.

#LRT hulk gets like twenty movies no matter how many of them flop, just keep making ’em. meanwhile there have been ZERO black widow movies

@ajaromano “one lady is good right? you’ll shut up now?”

“Me at age 70: Where is my Black Widow movie,” deadpanned one Tumblr user, while many others minced no words about the disappointment they felt over the omission.

“I don’t understand how Marvel can squeeze one of my tits affectionately and then punch me in the other tit in the same day,” wrote the-goddamazon in a post summarizing the unequal treatment she felt Black Widow had received compared to her male cohorts on the Avengers team thus far.

But the gender issue wasn’t the only disparity on display. Many fans pointed out that the difference in style between Marvel and rival comics behemoth DC had never been clearer—though it’s hardly a contest given that DC inexplicably chose to bypass its own appearance at New York Comic Con and instead roll out its five-year lineup, including the much-longed-for Wonder Woman movie, in an undernoticed investors meeting earlier this month. Comparisons between the two approaches were inevitable:

DC’s “no jokes” policy doesn’t apply to their schedule announcement in comparison to Marvel’s.

#Marvel proves why they get fanboys. DC makes announcement during investor call, Marvel makes its an event for fans! #MarvelEvent

@kevinkelly LOL – it was a LINEUP ANNOUNCEMENT. I don’t even have skin in DC vs. Marvel but boy is the latter winning the press suck-up war.

I wonder what it says that Marvel didn’t make this announcement at a Comic-Con. Probably that they’re not really a comic company anymore.

There was plenty of satire surrounding the event as well, referencing everything from Marvel’s “too big to fail” aura…

to its penchant to throw gobs at money at films starring blonde guys named Chris.

But Marvel, which has stayed on top of its game, had the satirical line down, too. After faking everyone out with the playful joke announcement of a (non-existent) movie called “Captain America: Serpent Society,” Feige explained that “there are always plans, but mainly jokes.” It was a joke that trended worldwide for over half an hour, as fans applauded the studio’s way of teasing them for eking out one final bit of controversy over its upcoming Civil War Avengers arc.

All in all, Feige’s aside might be the real template for how the next four years of the Marvel universe will unfold. With attention paid to just having fun, as Guardians of the Galaxy made clear, it seems evident that the studio’s plans aren’t as important as its ability to simply show up, make us laugh, and be beloved.

And Marvel, meanwhile, will be laughing all the way to the bank.