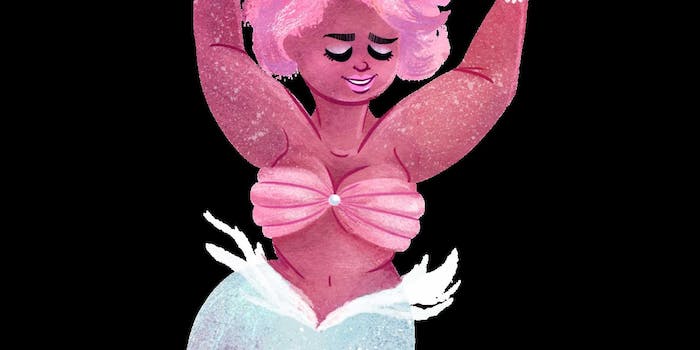 Tumblr explains why everything you know about mermaids is wrong

Because someone needs to break down mermaid-related cliches.

Mermaids are one of the creatures that the fantasy world can’t get enough of. They’re right up there with dragons and unicorns when it comes to mythical creatures that nerdy kids never really grow out of. But for some inexplicable reason, Hollywood is completely failing to provide the world with a modern reimagining of the mermaid myth. Seriously, a cameo appearance in the worst Pirates of the Caribbean movie is all we’ve seen of them in recent years, while dragon fans get The Hobbit, Game of Thrones and Harry Potter. Totally unfair.

So, the Tumblr community has decided to just go ahead and solve the mermaid problem by themselves.

The post now has over 115,000 notes, with other people adding new ideas to the list. “Sea mermaids rescuing injured animals from oil spills and taking care of them,” suggests mistyelixir. “swamp mermaids creating little homes from algae and moss and twigs for the frogs and alligators. river mermaids racing with otters and fish and helping creatures swim upstream.” 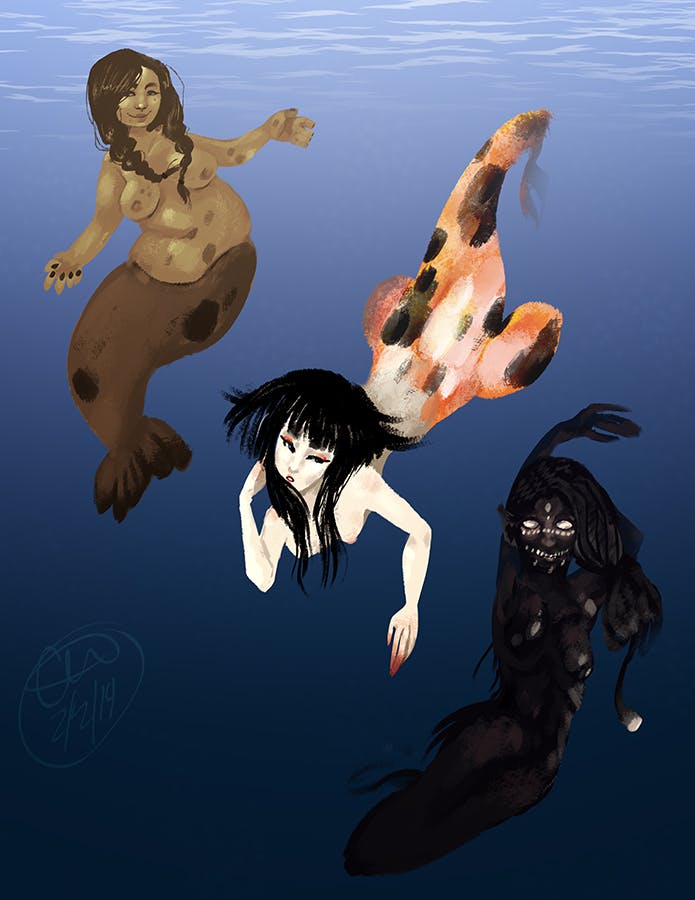 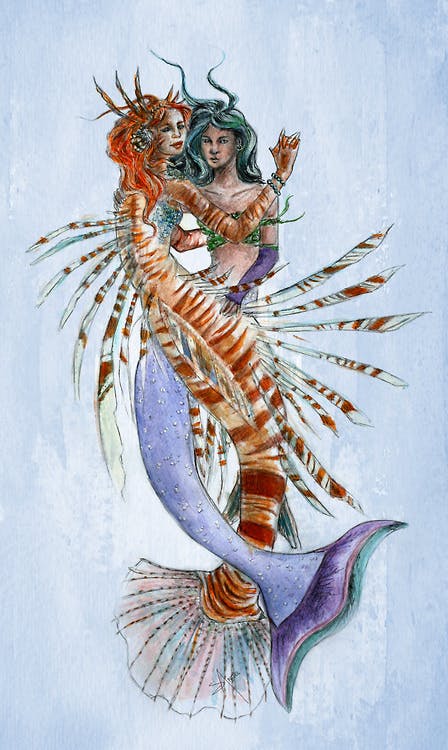 “Imagine deep sea mermaids,” writes williamstanaforthdonahue. “mermaids with bioluminescent scales, mermaids with lures for attracting their prey, mermaids with long jagged teeth and glowing eyes and ragged fins; an all-female race of mermaids that reproduce like the anglerfish, the males of their species inconsequential & impermanent… mermaids whose homes are the ancient ribcages of half-buried whales.”

“Huge fucking teeth like angler fish and eyes that are dark and can swallow your soul through simple eye contact,” adds theblondebitch, trying to picture what a deep-sea mermaid would look like. “Their head is out of proportion with their body. Their skin is pale like chalk and stretched impossibly thin over a large rib cage and protruding spinal bones. Everything is sharp points, elbows, clavicle, cheekbones above the horrifying teeth. What little hair they have, if any, is either pale white or black like the water and thin and wispy, like smoke.”

It’s no coincidence that a lot of these ideas emphasise the grotesque over the feminine and romantic. Mermaids are one of the very few monsters that are explicitly written as female, but the old legends seem pretty tired and sexist in a 21st century context. Either we’re used to seeing de-fanged, child-friendly mermaids like Disney’s Ariel, or unimaginative retellings of the old stories where mermaids start off sweet and seductive but end up drawing men down to their deaths. Tumblr’s mermaids are frightening, unearthly, and have very little interest in chasing sailors around.

This new art and fiction meme reclaims mermaids from the “pretty” image they’ve been given in recent years. Mermaids used to be powerful and frightening (even if that power was partly tied into their sex appeal), and it seems unfair that one of the few well-known female monsters is no longer allowed to be, well, monstrous. The mermaids in Pirates of the Caribbean: On Stranger Tides were mostly played by fashion models, specifically those with “natural breasts” (a term that was infamously used in the movie’s casting call, on the grounds that 18th century women obviously didn’t have implants), which kind of tells you all you need to know about how likely we are to see some slimy, scaly mermaids in a Hollywood movie anytime soon.

Tumblr artists are taking the original mythological mermaid characteristics and twisting them, to create a matriarchal society of monsters that more closely resemble real sea creatures than the clamshell-wearing supermodels we’re used to. This also allows artists to play with different body types than the traditionally slim and white mermaid ideal. If mermaids can resemble sharks or seals or anglerfish, then they can certainly be different races or body types. 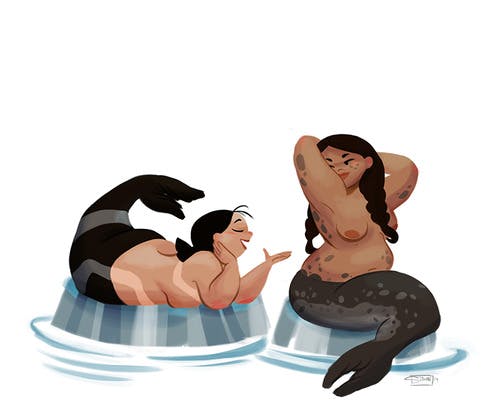 This recent fascination with reworking old mermaid stories may have originated with a post by screaming-till-im-numb, who wrote:

“I want someone to write a book where Mermaids are the women thrown off ships when the sailors got afraid because having a woman on the boat is bad luck. And as they sink to the bottom legs tied together they change slowly until they can breath, until they can use their tied up legs to swim. And they drown sailors in revenge, luring them in by singing in their husky voices still stinging from the salt water they breathed.”

This concept has already inspired a wonderful short story by waldorph, which in turn led to not one but two mini-webcomics. 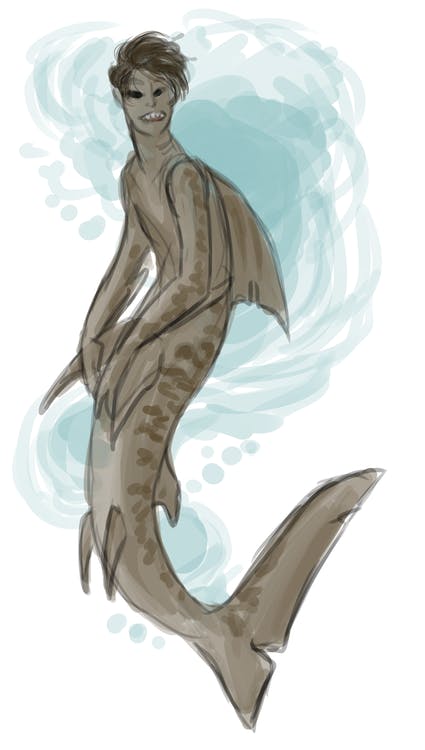 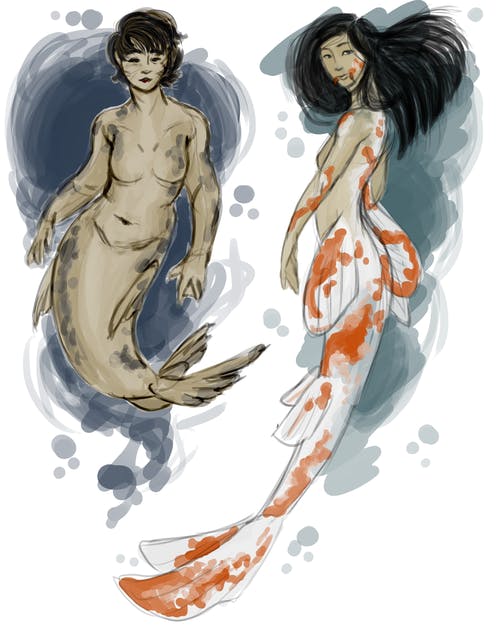 Helpfully, there’s at least one in-depth resource on how to draw or write about mermaid anatomy, including GIFs of real humans swimming in mermaid tails (such as Nadya Vessey, an amputee who asked the famous movie prop-makers WETA Workshops to build her a functioning mermaid tail). Should your mermaid have gills, or not? Should their tail flap horizontally, or vertically? What type of hairstyle looks best underwater? How would mermaid/merman sex work, anyway? All your scientific questions answered (kind of).

Now all we have to do is wait for the wider zeitgeist to lose interest in vampires and werewolves, and catch up to all these awesome mermaid ideas. We’re thinking five years, maybe? Make it happen, Hollywood. Twilight is old news.