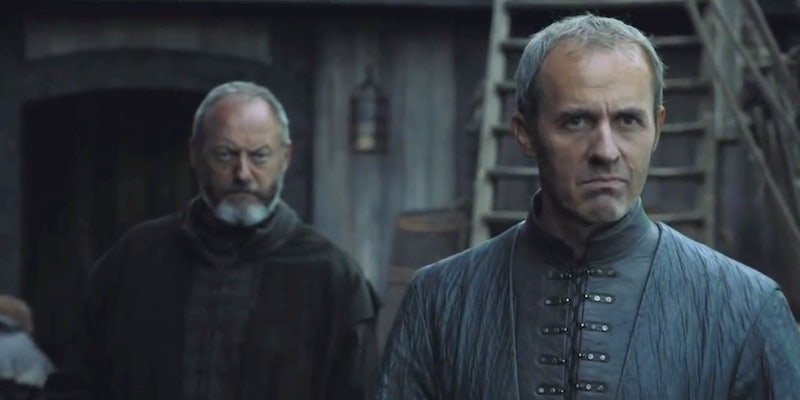 How one of the most unlikeable Game of Thrones characters won over the Web.

With a little over a month until the new season of Game of Thrones debuts, fan withdrawal is at an all-time high.

We’ve already gotten two trailers and a 15-minute featurette, but earlier this week we finally received the character posters. There’s 20 of them, and each of them focuses on a character with the phrase Valar Morghulis (“All men must die”) on the bottom with the premiere date.

While there’s plenty of discussion online about the brooding posters and what we can expect from the upcoming season, the bigger focus on social news site Reddit was what was missing from the collection—or rather, who was missing. 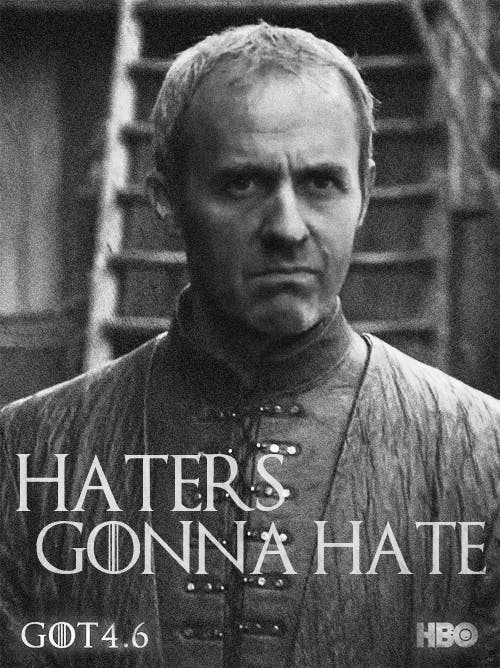 In fact, we’ve hardly seen Stannis Baratheon, one of the players vying for the Iron Throne, portrayed by actor Stephen Dillane on the show, in any of HBO’s promotions so far. He doesn’t have a character poster, he’s not in the featurette, and between the two trailers, he has exactly one line of dialogue (starts at about 0:53). That’s all of about five seconds of screentime.

After five books, thousands of pages, three seasons to date, and plenty of downtime to theorize (no matter how much of the Game of Thrones and/or A Song of Ice and Fire universe you’ve actually consumed), almost all fans will agree on just a few things. More characters you love and hate will die, the dragons will look awesome doing just about anything on TV, and Hodor at some point will most certainly say “Hodor.” Everything else, from Jon Snow’s parentage to who will eventually claim the Iron Throne is constantly up for debate.

But one of the many things to polarize Game of Thrones fans is Stannis Baratheon, the dark horse of House Baratheon. You either love him or you hate him. He’s the Westerosi One True God to his fans. You can see him emerging out as the victor despite your actual allegiance to the other possible kings (or queen), or you want him to burn up in one of Melisandre’s sacrificial ceremonies or by any of Daenerys Targaryen’s three dragons.

That line is often (but not always) drawn based on how you answer the following question: Have you read the books?

Much of what “Stannis the Mannis,” as many on the Internet affectionately call him, does and why people are so drawn to him is yet to come in the TV shows, but there’s already plenty to admire him for up to this point in the show (approximately two-thirds of the way through A Storm of Swords). If the producers follow the book closely enough, Stannis will have a pretty great season—and he already has a fanbase online ready to pledge their allegiance.

Even if you still can’t make yourself like him or picture him actually emerging as the winner at the end of the day, you might just respect him.

Stannis may have it better than other characters simply because he’s still alive at this point in the game, but he hasn’t had it easy.

He’s the middle Baratheon: the younger to King Robert and the older to Renly, and if one word could describe his relationship with his brothers, it’d be resentment. He resents Robert for giving him Dragonstone, while Renly got Storm’s End, which was seen as the wealthier castle, in the rebellion that precedes the books and series. He resents Robert again for making Ned Stark the Hand of the King. He resents Renly for vying for the throne himself, even though Stannis is the older brother.

His relationship with his wife isn’t any better. She hasn’t given him any sons, only a sickly daughter, so he resents her as well. His most loyal advisor is Ser Davos Seaworth, who  clashes with Melisandre, a priestess of the Lord of Light, who believes that Stannis is essentially a reincarnation of a messianic figure in her religion.

Stannis is stubborn, serious, and doesn’t try to flatter you, and he’s unintentionally one of the funnier characters in the books, but none of the other characters have a high opinion of him. Loras Tyrell, the commander of Renly’s Kingsguard and Renly’s lover, said that nobody would ever support Stannis as king because he “has the personality of a lobster.”

But even lacking warmth and charm, people can’t help but root for him. One fan called him “basically Inspector Javert… on Westeros.”

“He’s definitely a huge dick, but there’s something about him that I can’t not like,” SetsunaFS wrote.

And above all else, he’s ruled by his sense of justice and duty.

Family, Duty, “Honor”—and no, he’s not secretly a Tully

Once Stannis finds out that his nephew Joffrey is a product of incest and not actually Robert’s son, he declares himself Robert’s true heir. It’s his duty to himself, to his daughter (who is his heir), to Robert, and to Westeros to ascend to the throne. Robert and Cersei’s children aren’t true heirs, so he’s the next in line, something Ned supported before his death. It’s a vast contrast from Daenerys, who feels that her claim to the throne is her birthright.

Renly tries to claim the throne for himself, and that all comes to a head when the two meet in Season 2. Stannis may be the better military leader, but he will never win the favor of the people—and Renly knows it.

When Stannis and Melisandre kill Renly by sending a shadow assassin, Stannis felt that justice was served—even though kinslaying is a huge no-no in Westeros. Stannis then accepts the swords of most of Renly’s men in the fight against the Lannisters, even though they were previously sworn to his enemy.

It’s the same sense of justice that caused Stannis to both knight Davos Seaworth for saving him and his men during Robert’s Rebellion and cut off the first joints the fingers on his left hand for smuggling, and for him to try to use other means, including Melisandre’s influence, to win after his defeat at Blackwater.

Yes, he was willing to sacrifice Gendry (in the book it was Edric Storm, another bastard son of Robert’s) for the “greater good,” but it was ultimately a means for him to get the Iron Throne. But even with his sense of duty and justice, he had Davos, his moral compass by his side to intervene before it was too late.

Davos and the Red Woman

It’s hard to sympathize with Stannis because we never get to see what happens inside his head. Stannis is not a point-of-view character in the books, so for the most part, we witness Stannis through the eyes of his biggest advocate, Davos.

“For me, [liking Stannis] mostly comes from really liking Davos,” WeaselSlayer wrote. “I know his respect comes from somewhere and I respect Davos’ character.”

Despite losing his joints, Davos is consistently loyal to Stannis. It’s a similar relationship to Robert and Ned except that Davos will actually voice when he doesn’t like something or thinks that Stannis is making the wrong move.

Stannis also confides in Melisandre, a priestess of the R’hllor faith from Asshai, who eventually comes to advise both him and his family. It’s often her ruthlessness, in the name of R’hllor, where Stannis will get a bad rep. Once he loses at Blackwater, he spends much of season 3 locked away in counsel with her. She’s willing to kill Renly and sacrifice Stannis’s blood relatives to get him on the Iron Throne, which, despite any moral quandaries, will ultimately allow him to do his duty. It’s all about survival.

Davos feels Stannis is wrong to give Melisandre so much influence. With any other contender for the throne, voicing his opinion might have gotten him imprisoned or executed. Stannis makes him the Hand of the King. It’s not until he tries to kill Melisandre that he gets arrested.

Ultimately, it’s Davos who sets Stannis on his path for the rest of A Storm of Swords and Season 4. After learning to read, Davos receives the letter from the Night’s Watch asking any of the kings for aid against the wildlings.

Stannis respects Davos, and he holds him in higher regard than many of equal rank to himself. Of course this endears him more to his fans, and it’s said that a man should be judged on how he treats his inferiors, not his equals.

To another character late in A Storm of Swords, Stannis says of Davos:

Stannis is a hard character to like by other characters’ standards, and even the show’s creators, David Benioff and D.B. Weiss, don’t seem to care for him much.

“Stannis’s treatment on the show is getting oddly meta,” SageOfTheWise wrote. “He’s getting treated just like he actually gets treated by the characters themselves.”

Another redditor noted that some people in r/asoiaf, a subreddit that goes in-depth into the characters and storylines, believe that Benioff and Weiss’s disdain for Stannis is why the character appears so differently from the books.

It’s true—TV Stannis is very different from book Stannis. Aside from more subtle nuances that often get lost in an adaptation, many people believe that he’s painted to look like a villain instead of a complicated character. Stannis is made to look like he only takes orders from Melisandre instead of also listening to Davos’s counsel and it’s hard to see why Davos would remain loyal to him after everything that’s happened.

But according to writer Bryan Cogman, it’s not all black and white.

“I personally don’t view characters in terms of whether or not they’re ‘likeable,’” Cogman told WinterIsComing.net regarding the criticism. “We put them into (hopefully) interesting and dramatic situations, force them to make hard choices, watch them fail, watch them succeed, watch them make terrible mistakes, watch them learn from those mistakes (or not, in some cases). That’s drama. And you have to watch characters stumble if you want their triumphs to have any weight (Season 2 Dany vs. Season 3 Dany comes to mind).”

What ultimately wins most book readers over to Stannis’s side is yet to come, and while we’ve hardly seen any of him in the promotional footage, maybe that was intentional on HBO’s part. We’ve already seen Tyrion Lannister in chains (finally in a situation he can’t talk himself out of.) We’re introduced to the Red Viper, Arya Stark’s still out for vengeance, and there’s plenty of talk post-Red Wedding. Stannis is the least of the casual viewers’ concerns. He still has a big part to play, and whether or not you like him, he should not be ignored.

Fans were concerned about Stannis’s arc on the show after listening to Davos only after Melisandre advised him to listen at the end of Season 3, but as aphidman argued, we might not have anything to worry about in the long run.

“So why do I think people shouldn’t be worried?” he said. “It is because this is the beginning of Stannis’ redemption arc. It would not be keeping in line with the show’s continuity to do a 180 on the character and have him completely ignore Melisandre’s counsel or his determination to win the Iron Throne.”

In the most recent trailer, Stannis is heard saying, “I will not be the page in someone else’s history book,” and not only does it speak for him and his journey, it speaks for his fans. Stannis might not care if you like him, but his fans sure do—and they’ll make sure his case is heard.

But will he ultimately win the Iron Throne? You’ll have to wait along with the rest of us.