You can now go visit Evan in the game.

We’ve all been there: It’s the end of a long day, and all we want to do is escape into a video game. Sometimes it was just a bad day at work. Sometimes it’s a hurt that goes deeper.

For one Fallout 4 player, trekking through the game’s post-apocalyptic wasteland was how he coped with the loss of his father. The player, who goes by the handle NoohjXLVII, said he used the game to build a sentry bot that he named Greg after his dad.

“He had the body type of a sentry bot… And liked to do wood working as a hobby hence [the] hammer saws,” NoohjXLVII wrote in a post on Reddit a few months ago.

NoohjXLVII revealed in that post that he was reeling from another tragedy. His 24-year-old brother, Evan, was hospitalized for complications related to diabetes. He didn’t make it.

Someone at Bethesda Softworks must have seen NoohjXLVII’s heartbreaking story, because on Thursday NoohjXLVII popped up again to say that the company had not only sent him a care package, it actually built his brother into the game as a non-player character.

“The words he’s saying sounds exactly like my brother. I don’t know if it was just a coincidence or they did some research,” NoohjXLVII wrote. “Either way, I can’t thank Bethesda enough for immortalizing him in his favorite game. The only other favorite game of his being Kingdom Hearts. RIP Brother, I’ll see you on the other side some day.” 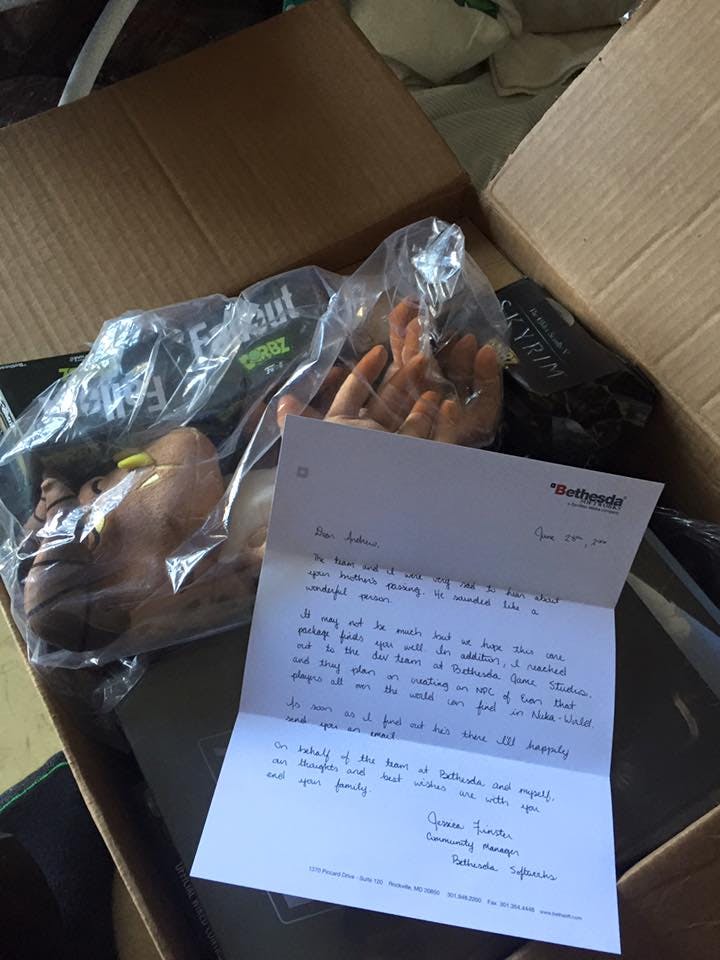 He added that if you happen to come across Evan while in the wasteland, you should feel free to help yourself to his supplies. “In real life,” NoohjXLVII wrote, “he would give you the shirt off of his back to help those in need.”