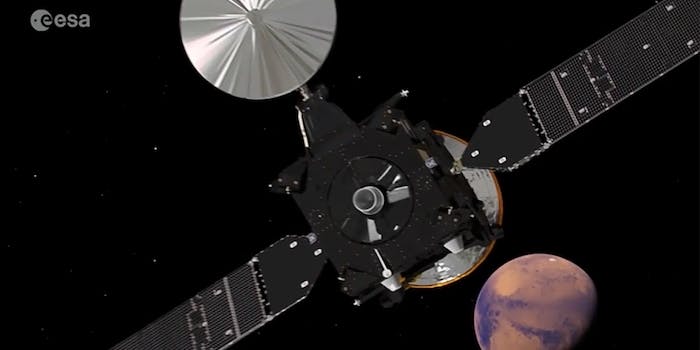 This is the first European mission to land on the surface of Mars!

A European probe is due to land on Mars on Wednesday, and you can watch online as it happens.

The European Space Agency (ESA) and the Russian Federal Space Agency teamed up to send two spacecrafts to Mars. The un-poetically named Trace Gas Orbiter is currently making its way into orbit around the planet, while the landing craft, Schiaparelli, begins its descent to the surface at 10:42am ET.

ESA posted a video simulation of the probe’s 6-minute journey to the planet’s surface, but you can watch the real thing play out on its livestreaming site. Schiaparelli also has its own Twitter account, where ESA will be posting live updates.

Quick recap of how Schiaparelli will slow from 21000 km/h to 0 in less than 6 minutes #ExoMars https://t.co/rzEB0tFkRT pic.twitter.com/gGJ8v6Z3NO

Unlike NASA’s Mars rovers, Schiaparelli has a short shelf-life. After landing, the disc-shaped craft will gather data about the atmosphere and wind speed for four days before running out of battery life, rather than traveling on the surface.

ExoMars is the first European mission to land on the surface of another planet, and paves the way for future Mars missions.