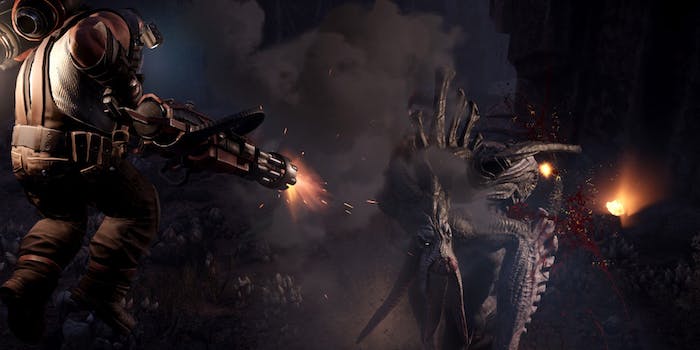 Get your first shot at hunting monsters—and at finding game bugs.

The developers of Left 4 Dead—one of the most popular and arguably best cooperative first-person shooter games ever—are now accepting signups for alpha testing on PC for their new cooperative FPS game Evolve.

If you’ve never been involved in alpha testing, it’s not all fun and games. The build is generally rough, so it’s not a matter of whether you will discover bugs or not, but when and how many. Participating in an alpha test and embracing your role as a tester can help a game reach its full potential, and Evolve is worthy of your time and effort.

The E3 2014 Game Critics Awards named Evolve the Best of Show. The GCA is composed of veteran editors of the video game press, so this alone is worth sitting up and paying attention to. We’ve also had our hands on Evolve a few times this year, and can confirm that it’s a unique game that puts a new spin on competitive and cooperative FPS play.

The monster can be given greater toughness, speed, or damage potential, for example, and new abilities granted to the monster during its evolution will reflect those priorities. The monster player can mix and match those upgrades to take a hybrid route, like a stealthy monster who does much greater attack damage to allow for hit-and-run style play.

At the beginning of each match, the monster player’s best bet is to remain hidden. Going into stealth mode makes the monster more difficult to spot, and decreases the amount of noise it makes. A sonar ability allows the monster to see through solid objects, which is key to locating food and avoiding the team of hunters. The monster can also scale objects like walls and pillars of rock, and getting off the ground can be important early in game as the hunters can see the monster’s footprints.

Each of the four hunters is a specific class with specific duties. Trappers are responsible for limiting the monster’s movement and keeping it in a kill zone. The main responsibility of whoever is playing the Assault class is to do as much damage to the monster as possible in the shortest amount of time. The Support class can deliver area of effect attacks for area denial tactics, provide shields for other hunters, and other reinforce the abilities of their teammates. The Medic is responsible for keeping everyone alive.

The key for the monster player, then, is to avoid contact for as long as possible until the fight is solely on the monster’s terms. This is pretty counterintuitive for veterans of competitive FPS play, where the objective is usually to either engage the enemy immediately, or to quickly prepare to launch ambushes.

The hunters live or die by teamwork. This is, on the surface, no different than in any other competitive, team-based FPS game. And the fact that each hunter represents a specific class is no different than many games of the same ilk, either. What is different is that unlike in, say, Battlefield, where a player of any class can kill another player, in Evolve no single hunter is meant to be able to take down the monster alone.

In other words, where in many team-based, competitive FPS games a team can break up and lone wolf for entire matches, provided the players are skilled enough, in Evolve a team of hunters is doomed if they separate.

It only takes a few, well-crafted mechanics to reinvigorate the FPS genre. Wolfenstein: The New Order focuses on storytelling and challenge, and provided one of the best FPS experiences genre fans have seen in a long time. Evolve, on the other hand, has honed in on competitive and co-op multiplayer design, and stands to provide yet another reinvigorating FPS title.

The alpha is specifically for the PC version of Evolve, but the game will be released on PC, Xbox One, and PlayStation 4 on Oct. 21.