Westeros is dark and full of (grammatical) errors.

At this point in Game of Thrones, most fans have some opinion about who should ultimately take the Iron Throne.

King Tommen, while a while lot nicer than his older brother Joffrey, just isn’t cutting it. Varys might be on Daenerys Targaryen‘s side, but she struggles to keep peace in Meereen with the Sons of the Harpy foiling her at every turn. And after he set up Sansa Stark with Ramsay Bolton, we’re not sure what to think of Littlefinger.

It’s becoming clearer who the best contender for the next King of the Andals and the First Men should be. Almost as clear as if we saw it in Melisandre’s flames.

Fans have pretty much been #TeamStannis ever since he rode upon Mance Rayder’s camp north of the Wall last season. A hard man (and a hard man to like), he was like a prickly thorn on our backs until we were shown how truly awesome he is. And his affinity for grammar has endeared him to us even more.

Just look at how he rolls up to save the day. I’ve lost track of how often I’ve seen this video in the past year.

Last year I tried endearing Stannis Baratheon, who I called the “Internet’s King of Westeros,” to casual show viewers without giving away too much of what happens in the books. Sure he has his quirks, but the things that make Ser Davos Seaworth so loyal to him were hidden within. Like with R’hllor, we just had to see the light. Or if the onion analogy from Shrek works better, that’s perfectly acceptable too.

We’re only halfway through season 5 and it’s already proving to be Stannis the Mannis’s best season yet. As he marches to Winterfell with Davos and Melisandre at his side, we can only imagine what’s in store for him and his army as well as Sansa and the Boltons. (The Battle of Winterfell hasn’t happened yet in the narrative of A Song of Ice and Fire, so we don’t know either.)

But will the show’s softening of this hard character spell his doom? We already lost characters in the show who are still alive in the books, and Stannis’s possible death would be a hard loss for more than just his fans. It could rock the seven kingdoms.

Let’s take a look at why we hope that doesn’t happen.

1) Stannis is a stickler for grammar

He was merely in the background during Lord Commander Jon Snow’s announcement of the plans to go to Hardhome in the episode “Kill the Boy.” The brothers of the Night’s Watch, to say the least, weren’t exactly thrilled, and they weren’t afraid of expressing it.

“Let them die,” a Night’s Watch brother said. “We got our own to worry about. Less enemies for us.”

With with one grammatical correction, he became everyone’s favorite grumpy would-be king again.

Stannis Baratheon corrects the grammar of one of the Night's Watch, and becomes my new favorite character on #Got. pic.twitter.com/HdASlxma3M

The fact that Stannis knows the difference between "fewer" and "less" is the strongest claim he has to the throne IMO.

Stannis of the House Grammarnazi #GameofThrones

Of course Stannis is a grammar nazi. Of course he is. #GameOfThrones #fewer

And that’s not the first time we’ve seen Stannis’s affinity for grammar. For a show with so many threads intertwining at once, Game of Thrones, for the most part, has excellent continuity.

During a quieter moment in season 2, Stannis had wondered if Davos carried the finger bones he chopped off as punishment for smuggling for good luck. When Davos made the same grammatical mistake by saying he had “four less fingernails to clean,” Stannis was quick to correct him. Stannis may not have thought it important to teach his Hand how to read (thank Shireen for that), but he sure as hell made it important for him to speak properly.

Like any good king, Stannis rewards those who show their loyalty and punishes those who defy him or break the law. (Davos had the best of both worlds as Stannis knighted him and chopped his fingers.) He called for Mance Rayder to kneel for him in the season 5 premiere, and Mance refused; he even tried getting Jon to talk some sense into him. Stannis was a reasonable man, after all.

But that didn’t work either, and like any many of his word, he followed through: He burned Mance alive at the stake—at least until Jon shot Mance with an arrow to put him out of his misery.

3) He respects Jon, even though Jon’s way too honorable

It was only a matter of time before our two favorite brooding characters met. Stannis and Jon were introduced just north of the Wall at the end of season 4. Once Stannis learned that Ned Stark was Jon’s father, he asked for his thoughts on what to do with Mance. That started a relationship based on respect, even though they might not have always agreed on everything.

At first, before Jon became the Lord Commander, Jon was someone useful to Stannis: He could convince Mance to kneel and he could shed his black cloak and emerge as the legitimate Stark to take the North back from the Boltons (with loyalty to Stannis). Jon failed with Mance and ultimately turned Stannis down because he had his vows. Stannis sees this as an honorable, but strategically misguided move.

Then Jon chopped off Janos Slynt’s head for disobeying a direct order and gained even more respect, leading Stannis to defend him to his wife, Selyse, who like everyone else looks down on him for being a bastard. He even allowed Jon and Tormund to take his ships to Hardhome.

4) Guess whose sigil wasn’t destroyed by the Sparrows? 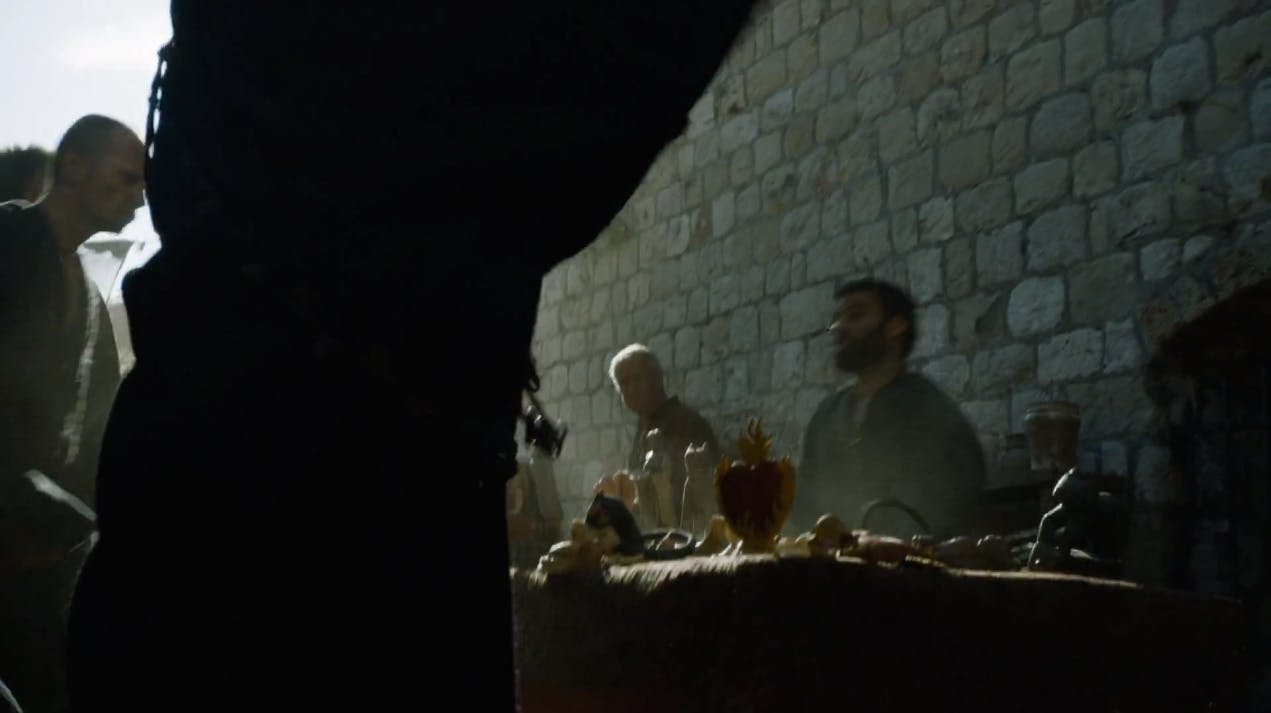 It got knocked to the ground a few seconds later when one of them pushed the table down, but they didn’t outright damage it. It’s probably just a coincidence (the Sparrows worship the Seven, while Stannis is committed to the lord of light, R’hllor), but nonetheless it’s pretty damn cool.

Stannis’s elder brother Robert lost only one battle during Robert’s Rebellion, and that was against Samwell Tarly’s father, Randyll. And while Stannis can’t say that to Randyll, he’ll admit it to Sam.

Although Sam’s not the soldier he expected, Stannis likely noticed the close council he keeps with Jon and the clever way he’s handled politics among the brothers. Plus, Sam has killed a White Walker, giving Stannis another reason to be impressed. While the swords and dragonglass will do their job, they alone won’t win a war. Samwell can offer knowledge that’ll prepare them for that final battle. He’s crucial, and Stannis recognizes that. “Keep reading, Samwell Tarly,” indeed.

6) He’s a prime candidate for father of the year

Granted, it doesn’t take much for Stannis to take up this mantle. Ned is dead, and most of the other candidates, dead or not, are pretty terrible. Tywin Lannister was a ruthless patriarch who blamed Tyrion for killing his wife, Stannis’s brother Robert was a womanizer who largely ignored his children (though they weren’t technically his), Jaime hasn’t really done anything as the real father of those children, and Roose told his only son he was a product of rape.

So when Shireen asked Stannis if he’s ashamed of her (due to her greyscale), he could’ve easily gone the route of Selyse, who openly shows her disdain for something that happened to the girl as an infant. But he didn’t, instead bringing on the feels train as he told her of his efforts to save her life and cure her when everyone else wanted him to abandon her.

He still has a ways to go when it comes to giving fatherly hugs, but he’s still the Mannis in our books.