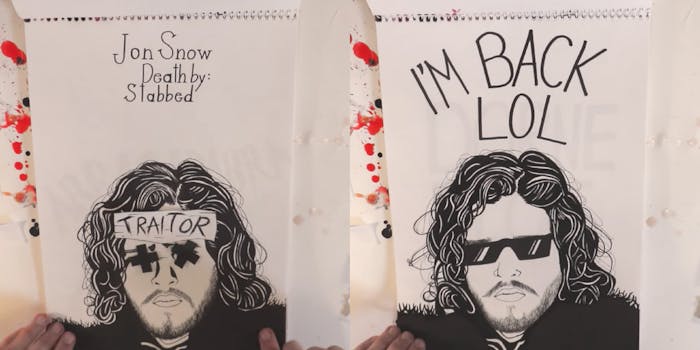 Artist slices, stabs, and burns through every major ‘Game of Thrones’ death

He even lights the art aflame—talk about dedication.

Want to catch up on Game of Thrones, but don’t have an extra 60 hours to spare? Get the gist by watching one Austrian artist illustrate and animate every major death in the series.

In just three-and-a-half minutes, artist Hannes Sommer reveals characters from Viserys Targaryen to the High Sparrow, and illustrates how each died. Throughout the video, Sommer smatters, rips, and even lights aflame beloved (and not as cared for) Targaryens, Lannisters, and Baratheons.

According to Sommer, it took him an estimated 150 hours to illustrate all the characters in the video. Of course, for a series that loves to off people, it’s easy to skip a few—for Sommer, he focused on the deaths that had the most emotional impact on him. Though Maester Luwin, Qhorin Halfhand, and others didn’t make the cut, it would have taken Sommers dozens of hours and another drawing pad to capture every death.

At least Jon Snow got the “abracadabra” revival he deserved.