Espionage Cosmetics expands cosmetics options for fans of the hit musical with its latest release.

Everyone’s eyes are on Lin-Manuel Miranda‘s Hamilton ahead of Sunday’s Tony Awards. Fans eager to show their passion and support for the hit Broadway musical have numerous ways to do so.

If you don’t want to throw away your shot to stand out, you might want to explore Hamilton-inspired cosmetics. It’s a cosmetics niche that grew in size this week when Espionage Cosmetics announced its latest product: Federalist Papers nail wraps. According to Espionage Cosmetics’ Christal VanEtten, the wraps have been one of their biggest online requests.

“The fandom is strong,” she said in a statement. “We’re incredibly happy this became a thing and we owe it all to our awesome audience and one hell of a Founding Father.” 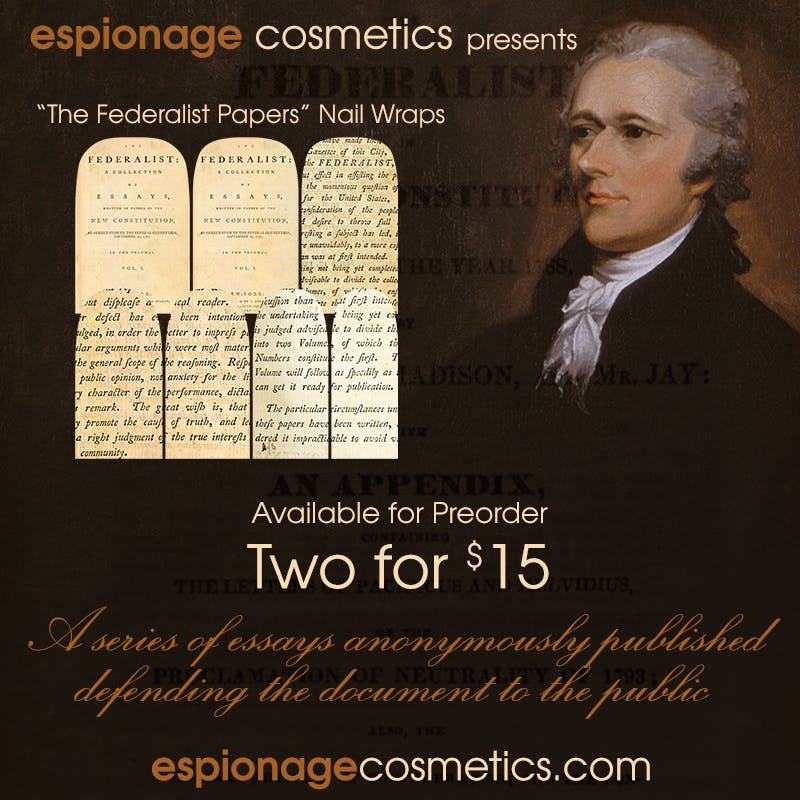 Unfortunately fans of the musical as well as interested history geeks will have to wait for it. The wraps are only available for preorder and won’t ship until July 15.

While you wait though, you can explore the other options. If wraps aren’t your style, there’s a range of Hamilton nail polishes offered by Etsy shop Comet Vomit. Comet Vomit offers 10 polishes inspired by the musical. There’s everything from a soft pink polish inspired by the beginning of Eliza’s romance with Alexander called “Helpless” to a metal grey color called “Guns and Ships” that’s “inspired by the sights, smells and sounds of revolution.” Each bottle can be bought individually for $10, or the entire Tell Your Story collection can be bought in two sets. One set has mini bottles while another has full size bottles.

For those who prefer something completely different from nails, the musical has inspired a range of fragrances at Southern Comforts Fragrances. The collection includes sample sizes, body balms, a set of all 10 full-size fragrances, and a set of all 10 fragrances in sample sizes. The scents bring to life such musical moments as “Just You Wait,” “You’ll be Back,” and “The Room Where it Happens” with sample sizes costing only $2.80.

With no sign of Hamilton’s popularity going anywhere anytime soon, these cosmetics probably won’t be the last the musical inspires. It’s just non-stop!