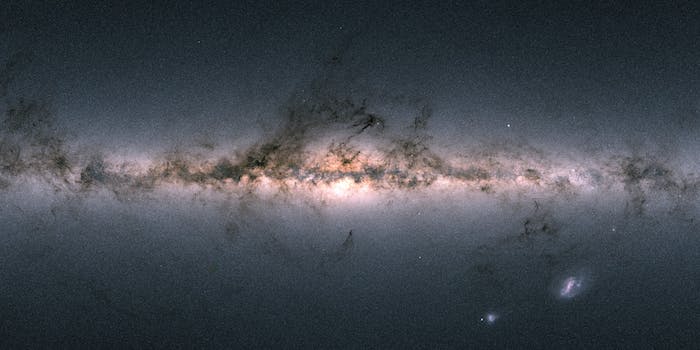 The European Space Agency just published an unprecedentedly detailed map of the stars. Based on data from the ESA’s Gaia space observatory—a satellite orbiting the sun since December 2013—it’s a gorgeous representation of the Milky Way and nearby galaxies.

You can check out the map in high resolution here, showing 1.7 billion stars. The pale strip across the middle of the map is the galactic plane, where most of the stars in the Milky Way are located. Viewed in three dimensions, this would be a disc. If you zoom in close, you’ll see the tiny specks of individual stars.

On the bottom right side of the image, you’ll see two pale blobs. That’s the Large and Small Magellanic Clouds, a pair of dwarf galaxies orbiting the Milky Way. Darker patches don’t necessarily indicate an absence of stars—they often represent regions of interstellar gas and dust, which absorb light and block out stars in the distance. In the words of the ESA, “Many of these conceal stellar nurseries where new generations of stars are being born.”

This map is just one element of a huge data dump from the Gaia program, including new research about space dust, star movements and temperatures, and a catalog of more than 14,000 objects in the solar system. The full archive is primarily a resource for academics, but there’s also some more accessible material for casual space enthusiasts. For instance, this video gives a 3D look at the 200 brightest asteroids orbiting our sun.

For 360-degree visualizations of star maps and other data from the Gaia project, you can find interactive videos, VR apps, and a real-time 3D visualization program here on the ESA website.