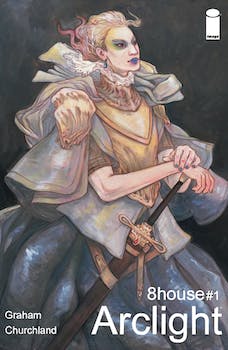 Eric Stephenson is worried that the comics industry is repeating the mistakes of the past.

During an event for comics retailers this weekend, Image Comics publisher Eric Stephenson spoke out against greed and short-sightedness in the industry. At one point, he challenged his fellow publishers to “stop acting like interchangeable brand managers and create.”

His speech was half constructive criticism, and half veiled digs at the so-called “Big Two” publishers, Marvel and DC. In particular, he urged retailers and publishers to be wary of tactics that drum up sales in the short term, but fail to serve their audience in the long run.

Image is enjoying a great deal of success at the moment, publishing numerous beloved comics including Saga, The Walking Dead, and The Wicked + The Divine. But while Stephenson did celebrate the creativity of the comic book medium, he also warned of a potential boom-and-bust scenario within the industry’s “ecosystem.”

He is not alone. Over the past few months, and increasingly since the beginning of this year, I have heard similar comments from all corners of this industry. Writers. Artists. Retailers. People are worried about the future.

Among other topics, Stephenson criticized the tactic of flooding the market with variant covers to increase sales—a possible reference to Marvel’s hip-hop variant covers, which retailers complained were damagingly expensive to stock.

He also took aim at publishers “trying to shore up their numbers” by releasing two issues of a comic each month—a strategy that DC just announced for some of the titles in its Rebirth relaunch this summer. (While DC’s new line of comics are only $2.99 each, a twice-monthly release pattern means that readers will really have to pay $5.98 per month to keep up. For many readers, this may prove too expensive to bother with on a longterm basis.)

In some ways, Stephenson’s speech felt like a direct reaction to DC’s Rebirth announcement last week, although Marvel’s “All New, All Different” rollout is another recent example—and Image is hardly innocent of using similar tactics itself, on occasion.

Rebirth is DC’s second company-wide semi-reboot in two years, and focuses on relaunching “legacy” superheroes with new comics starting at issue #1—precisely the kind of short-term sales boost Stephenson was criticizing. DC’s announcement was also full of subtle calls to its core audience of longterm fans instead of “casual readers,” an attitude that Stephenson doesn’t seem to share. “All comics should be for everyone,” he said. “Not just collectors. Not just whoever has the most cash on hand.”

Really strong speech from Eric Stephenson: https://t.co/lDPZwpajag lots I nodded along with while reading.

For many comics fans, Stephenson’s speech will inspire a sigh of relief.

All of his comments—the criticisms of short-term marketing tactics; the desire to move the industry forward instead of repeating past mistakes—are topics that are widely discussed by fans and creators online, especially when one of the Big Two announces another universal relaunch. People just want to read comics without worrying about some massive, industry-wide screw-up, so it’s reassuring to hear someone of Stephenson’s status speak out like this in public.