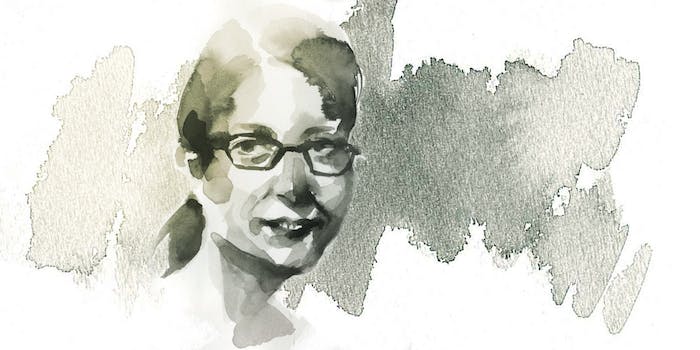 Get the 'Brain Scoop' from Emily Graslie.

Emily Graslie is the Chief Curiosity Correspondent at Chicago’s Field Museum of Natural History. If that sounds like a dream job, that’s because it is. After witnessing the passionate fan response to her YouTube channel the Brain Scoop, representatives from the Field Museum hired her to be the online face of its mission to share knowledge about our natural world. Every week she posts videos exploring the museum’s exhibitions, conservation work, and research.

Now, after three years of bite-size educational videos, and a surprise upgrade from private vlogger to official ambassador for the Field Museum, Graslie is one of the most recognizable and beloved figures in science vlogging.

Graslie’s YouTube career began with a guest appearance on the Vlogbrothers’ channel in 2012, giving Hank Green a tour of the University of Montana’s zoological museum, where she worked as an intern. It was so well-received that she quickly set up her own channel, beginning with day-in-the-life videos at the zoological museum before moving to Chicago. Casual viewers may recognize her 2014 video calling out sexism in the YouTube community, but that’s far from her main claim to fame. Reporting from behind the scenes at one of America’s most beloved museums, the Brain Scoop offers a unique voice in science vlogging.

We spoke to Emily Graslie about her work as a science educator, life at the Field Museum, and what goes into making a video for the Brain Scoop.

You had kind of an atypical origin story as a science educator, beginning with an undergrad degree in art. What led you to seek out an internship in a zoological museum?

I suppose the short answer is, I was looking for something with a bit more visual inspiration than what we had access to in the art department, which was a lot of wine bottles and plastic fruit and stuff. When I heard that there was a zoological museum on our campus, I became really interested in becoming a part of it. Since I wasn’t a scientist—I couldn’t utilize those resources for any kind of scientific inquiry—but I could use them as the basis for my art, which is pretty much how I got involved in the museum in the first place.

Your first appearance on camera was actually as a guest on Hank Green’s Vlogbrothers channel. Had you considered vlogging before then, or was that the impetus to get you started?

I didn’t have any background in video, and I don’t think I would’ve done it on my own. You have to have a natural interest in video editing to become a vlogger, which I didn’t really. I’d been blogging for a number of years about the museum anyway, so I already had a little bit of experience in cultivating a digital audience that way. But in terms of video production, I don’t know if it’s something I had thought of. So it was pretty convenient when I met Hank, that he allowed me to work with someone who would work on the production and post-production side of things.

And since then the Brain Scoop has become really popular. What kind of things have you learned during that time? How do you think your attitude and vlogging style has developed?

It’s developed not just because I’ve become a better communicator, but because of the resources available to me at the Field Museum, and all of the expertise, which is something I didn’t have access to before.

Before, in that museum in Montana, it was really limiting the type of content we could talk about. We could superficially talk about things in the collection, but there was no greater conversation about research that was being published, or how these specimens were being used to inform our understanding of biodiversity today. In the last few years we’ve been able to streamline our production. I work with two producers now, who do all of the filming and editing, and I have a really good rapport with my scientific colleagues, in so much that our process for making videos is a lot clearer than when I started. When I started it was a lot of like, opening a drawer and seeing what you’ve found, which is exciting and fun, but I think that can only carry a channel so far. We’ve become a lot more sophisticated.

Could you walk me through the process of how you think up an idea for a video and then produce it?

A lot of it isn’t even me thinking up an idea. The best ideas come from collaboration, and a lot of the best ideas come from random hallway conversations with my colleagues. A lot of the stuff that we end up turning into a video is because of a quick email or phone call or hallway chat, or even talking over beers at happy hour. That’s the casual environment that is really good at propagating inspiration. There’s nothing forceful behind it; it’s more that casual question, “What are you working on these days?”

So, it depends on the topic. Some ideas come to fruition really quickly, a matter of talking with somebody on a Friday and starting preproduction on the research for the video the following Monday. Some ideas, like our Project Hyena Diorama series, was like two years in the making—just to get the Indiegogo campaign and everything that we needed to organize internally all in place before we went live. We’re working on stuff now that probably won’t go live for a long time, and I think that’s OK. It’s a healthy mix of quick, short things that are timely, and other things that we can take a longer approach to.

“We’ve been able to tackle some really complicated things that aren’t being talked about on other channels.”

Am I right in thinking that you got your current job at the Chicago Field Museum as a result of the Brain Scoop?

Yes, it was completely a result of the Brain Scoop. I had only been making Brain Scoop videos for four months when I visited the Field Museum on a trip that was supported by a viewer of the show. This viewer had seen our videos in Montana, had thought that I would really enjoy the opportunity to come to a larger city and come to this massive museum and film behind the scenes here. And then when I did, there were a lot of Brain Scoop fans that showed up to congratulate me like, “Oh, you made it to Chicago!”

A lot of the executives at the Field Museum saw that, and saw the potential in being able to cultivate a younger, enthusiastic audience in this relatively new digital realm. Museums are only now pursuing seriously the YouTube route, not just putting stuff on YouTube, but making stuff for YouTube as a platform. I was only here for a few days when I was sat down in this conference room with all these executives and directors, and they asked if I’d ever be interested in coming to the Field Museum and having my program here. And I was like, this is the job of my dreams! I think I said yes on the spot.

How would you describe your job as a science educator at the museum now?

It’s really variable, and I like that about my job. I like that my job forces me to learn new things every single day, and I love that my job forces me to do hard things, very difficult things, whether that’s navigating some internal bureaucratic channel, or having to learn 26 different species concepts for the sake of a video. I like that my work allows me to work with diverse people from diverse backgrounds, and it allows me to pursue my own interests and the broader goals of the museum.

It’s developed in a way that I’m really proud of, and I’m really proud of the content that we’re making. I read a lot of comments that are like, “I wish you did more dissection videos,” or “I feel like these videos are getting kind of out of touch,” and I don’t see it like that; I see it more like we’ve matured over the years. And we’ve been able to tackle some really complicated things that aren’t being talked about on other channels.

That issue kind of leads into your most popular video, the one about how female science vloggers are treated online, which obviously resonated with a lot of people. Have you seen much improvement since then?

I’ve seen a lot of improvement, especially in the comments because Brain Scoop viewers are really good about reminding other people, “Those comments aren’t helpful here. Emily has said before that she doesn’t like reading those things.” But on the other hand, I feel increasingly frustrated that I’m still being asked about that video years after having made it.

I feel like a lot of people weigh that video as being the pinnacle of my success, and I don’t see it like that. Just because it is the most popular video, and it did resonate with people so much. For me it’s offered a lot of opportunities, but it’s also kind of pigeonholed me. It seems like anytime somebody wants to ask me about my work, it’s because I’m a woman YouTuber, not because I’m a YouTuber with quality content. So it’s a double-edged sword. I’m really grateful that people have found out about my channel because of that video, but in a gallery of 150 educational videos, I seem to be asked about that one over all the others.

I think it’s kind of interesting that I made that video as more of like a rant, not because I wanted something to put me on the map, you know? And I spent time certainly on that video, but I’ve spent a lot more time on a lot of other videos.

So, which one of your videos would you select as good tasters for people to start with, or things that you think are a real highlight from your channel?

I’m really proud of the videos we’ve been doing recently. The taxonomy of candy is something that is really appealing to people because it’s candy, but it’s marrying candy with a taxonomic lesson. I think it helps people to think of something that they hadn’t maybe considered before. It makes science and the way that taxonomists approach a scientific topic far more accessible than maybe it had been presented before.

That was also a lot of fun because … I didn’t really tell [my colleagues] what they’d be organizing, but I asked if they’d be available for 15 minutes to come down when we were filming something. And then I was like, I want you to taxonomically arrange all these candies. Their reactions were as variable as I could’ve hoped, which also made that video a lot of fun, and it was pretty spontaneous. But I had worked for years to get that level of comfort with some of my colleagues, so that’s a video that I’m proud of, and I think it’s a fun representation of our channel.

But also the collections tours that we do, like the recent video we did with Crystal Maier, the entomologist at the museum… being able to do a video with her about her research and show the larger collection of the museum. I think it makes museums feel more real and relatable to people.