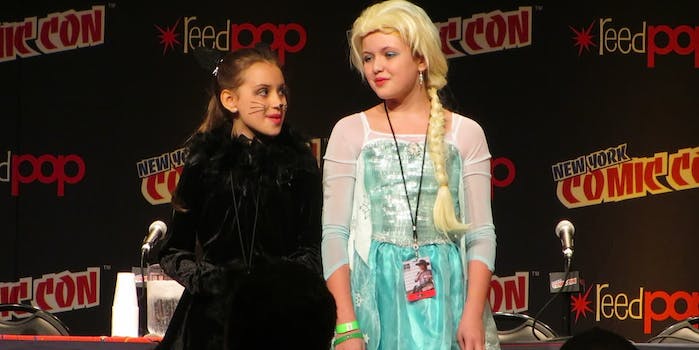 She made the show better for everyone.

There’s a lot to love about New York Comic Con: the chance to meet friends old and new, opportunities for celebrity sightings and grabbing free swag, or just the experience of mainlining a hundred different fandoms in one giant hall. The most poignant moment from my recent trip to NYCC, however, was one that I merely observed from afar, but that arguably sums up the best of what geek conventions have to offer.

It started with a delayed panel. The cast and crew of the Fox TV series Gotham were supposed to be on the Empire Stage at 1:15 p.m., but minutes before the show was due to start, the panelists were nowhere to be found. While tossing out freebies to the audience to kill time, pre-show host Michael Daniels, who hosts a warm-up act with “DJ Elliot,” spied a little girl dressed as Elsa from Frozen near the front of the room.

Daniels asked if the girl wanted to join him on the stage and lip-sync to the song “Let It Go” from the Frozen soundtrack. At first, she was reluctant to do it, but after the audience started chanting “Elsa! Elsa! Elsa!” she gamely agreed. Her friend, who was dressed as Catwoman, joined her.

The two 11-year-olds were understandably nervous, but by the end of the song, as they lip-synced to the now-famous hook, the audience was loving it. It was a reminder of how a simple gesture can give a young child an unforgettable experience and a testament to the unifying power of popular entertainment.