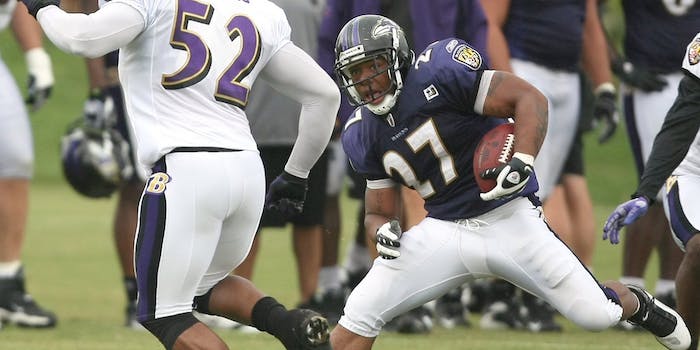 The former Baltimore Ravens running back won't even be able to play football virtually.

Former running back Ray Rice was released by the Baltimore Ravens and indefinitely suspended by the NFL after TMZ released disturbing video of him assaulting his wife, but now he’s been cut from the virtual Ravens lineup as well.

FOX Sports 1’s Mike Garafolo first reported that EA Sports, the company that manufactures Madden 15 and the other games in the series, was planning to remove Rice entirely from the game. Although he was currently serving a two-game suspension when he was released, players could still access Rice in the game.

Source tells @FOXSports1 that @EASPORTS will remove Ray Rice from Madden ’15 as part of Wk 1 update. Won’t be on Ravens or free agent lists.

USA Today online producer Brett Molina was able to confirm Rice’s cut, reporting that the rosters would be updated on Friday. About 20 minutes later, EA Sports confirmed the news publicly on Twitter.

With Ray Rice’s indefinite suspension from the NFL, he will be removed from Madden NFL 15. The roster change will take place by this Friday.

This isn’t the first time EA Sports has removed a controversial player from the game. It took out former New England Patriots player Aaron Hernandez after he was arrested and indicted for murder, but some players still managed to unlock Hernandez with a tasteless code.