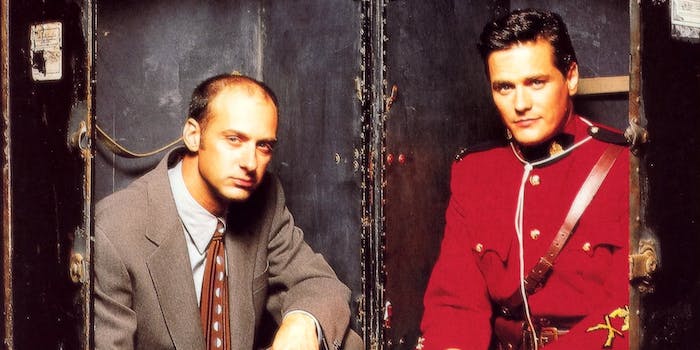 Season 1 of the cult Canadian cop show 'Due South' is now on YouTube, for free.

Cancel your plans and forget Netflix, because the world’s best TV show is now available on YouTube.

The Canadian Media Fund just uploaded a ton of classic Canadian TV shows and movies to YouTube, including Due South. If you’re already familiar with the show, that’s all you need to know. If not, please take out your to-do list and write “Watch Due South” at the top. We’ll wait.

Airing in the late ’90s, Due South is one of those episodic cop shows that got syndicated across the world, so you’ve probably seen at least one random re-run. It’s also a work of underappreciated genius, as any Due South fan will tell you. Building on familiar buddy-cop/fish-out-of-water comedy tropes, it has a famously surreal and absurdist sense of humor. The main characters are the naive, ludicrously wholesome Canadian mountie Benton Fraser and his long-suffering Chicago cop partner Ray. Oh, and Fraser’s pet wolf-dog Diefenbaker, who is deaf and can only understand orders by lip-reading.

Due South is one of those rare shows where almost every episode is a winner. It’s consistently funny and well-cast, and it made actor Paul Gross a heartthrob in the ’90s. (Any Canadians reading this are probably scoffing right now because of course you’ve heard of Paul Gross.) It’s mostly single-episode crime stories, but there are several ongoing arcs like Fraser’s quest to find the killers of his father, who frequently appears as an interfering ghost.

Along with its charmingly weird humor, Due South has real emotional depth—which is probably why it became such a cult classic. It inspired one of the biggest fanfic fandoms of the late ’90s and early 2000s, and it’s still going strong. You can catch season 1 for free on the Encore+ YouTube channel, and don’t be surprised if you immediately end up ordering season 2 once you’re finished. (For the record, Due South only gets better as it goes on.)