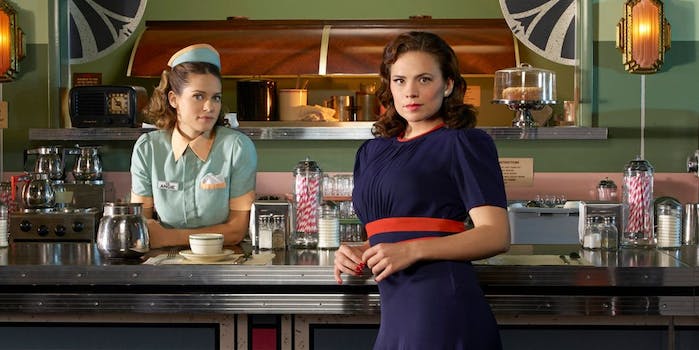 Captain America and Peggy Carter, together at last.

As we predicted, Hayley Atwell‘s dubsmash game was on fire during San Diego Comic Con. In between panels and interviews, she started an all-out war using the lip-sync app.

She and James D’Arcy (Agent Carter‘s Edwin Jarvis) went head-to-head with the Agents of S.H.I.E.L.D. cast with rival lip-sync clips, culminating in this hilarious team-up from the S.H.I.E.L.D. crew.

But the best was yet to come. After Comic-Con was over, Atwell upped her game by bringing Chris Evans into the mix. Yes, Captain America himself has now starred in not one but two dubsmash clips.

Their second video was the final nail in the coffin. Steve/Peggy shippers, prepare yourselves…

Hayley Atwell, this is simply Too Much. Marvel fandom may never recover.