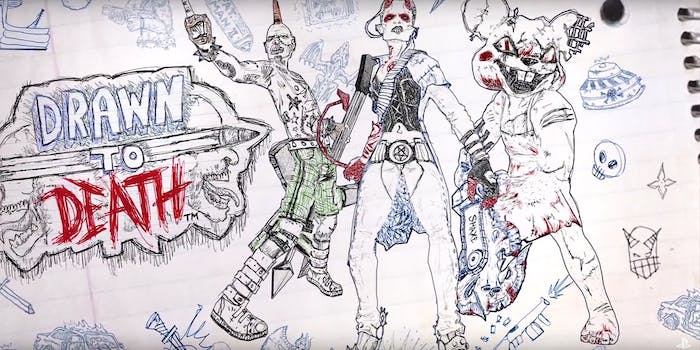 Drawn to Death turns notebook doodles into a multiplayer deathmatch

We got a hands-on preview of the new game from the creator of God of War.

David Jaffe’s appetite for destruction may never be satisfied, and we are all better for it.

As the creator of God of War and Twisted Metal, it was only a matter of time before he found a way to put his own spin on the adversarial third-person multiplayer shooter. Drawn To Death calls to mind other “art comes to life” games like Comix Zone and Wild Riders, only instead of playing as comic book characters, you’re immersed in a seemingly unrefined world of notebook doodles and scribbles. And it’s a particularly gruesome and deadly world at that.

Here’s a look at the hands-on preview we recently got with Drawn to Death.

Of course it isn’t enough for games to rely on creative and novel visual styles as their primary draw. That’s why many of us fondly remember the stylized Japanese art of the technically excellent Okami, but struggle to have much of a conversation about, say, the Greek pottery-inspired designs of Apotheon. Fortunately, the imagination at play in Drawn To Death also applies to the fighter roster and the weapons they wield. It’s not that different from the wide array of combat options in the Twisted Metal series, with an added layer of inventiveness that would even impress the folks at Insomniac Games (Ratchet & Clank, Sunset Overdrive). There’s the jock who, while decapitated from the waist down, can wield a lethal dodgeball. You can even wield a baby dragon who barfs fireballs. Those worried that Drawn To Death would be short of familiar weapons need not worry as it also offers automatic rifles and handguns.

The opening video that transitions to the main menu could not be more fitting: a live-action, first-person view of the student who conceived this world glancing between a notebook and the CPR instructor at the other end of the classroom. I never honed a craft for doodles befitting a notebook during my teens, yet I certainly admired my classmates who could cover an entire page with otherworldly creations in the span of a single class period.

Aside from the unusual visual inspiration for Drawn To Death, what truly sells the look is how Jaffe’s art team went all out with the art direction. It’s not enough that the style intentionally looks like it was drawn by someone without any formal art training; there’s also toilet humor (eg. masturbation references) that only adds a juvenile authenticity to this bloody world of homicidal sketches. It’s the kind of artistic mindset that conceives an opponent who has the head of a shark and the body of a buxom woman. If you look closely, you’ll see the game’s artists even got the colors of the line drawings right, using specific shades of black and blue ballpoint pen inks. The final touches are the college-ruled notebook lines that make up all of the maps’ backgrounds. The pervasiveness and accuracy of those pages conjure disturbing flashbacks of high school. Not even the recently well-received adolescent tale Life Is Strange made me this grateful that those four years are behind me.

Drawn to Death is scheduled for release sometime in 2016 on PlayStation 4.