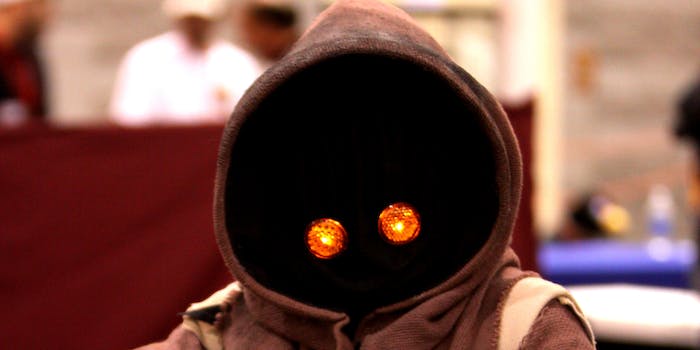 Once a year at Dragon Con, this chess-playing teen transforms into the champion of the sand people.

This week, Stephen Eisenhauer starts high school. But few other ninth-graders can beat his summer vacation story: While the rest of us were grilling out for Labor Day, Eisenhauer donned a set of robes and glowing eyes and spent the weekend playing chess as Dragon Con‘s own Chess Jawa.

“Jawas love chess!” Eisenhauer told the Daily Dot. “There’s not much else to do during the long hot days in the Sandcrawler.” 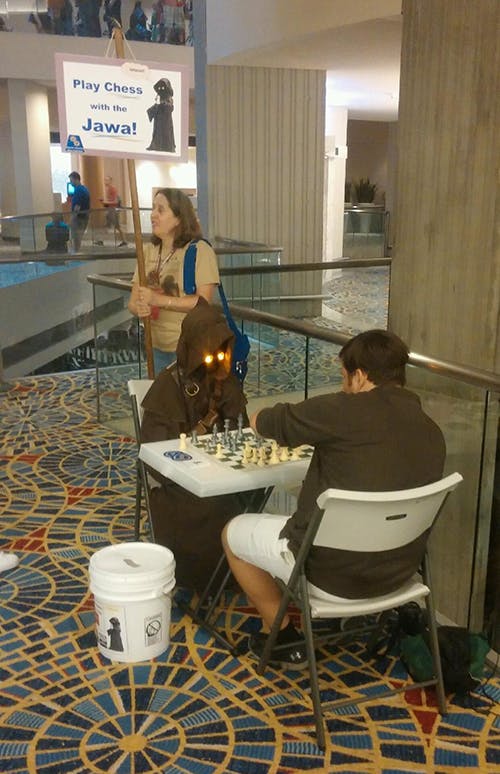 Just how does one get to be a chess-playing Jawa? It helps to be a fan of chess and a fan of Star Wars, of course. Eisenhauer’s family members are all huge Star Wars fans. His parents are both in the famous 501st Division of charity-minded cosplayers, and his brother volunteers for the Dragon Con Star Wars track. Eisenhauer tells us he’s been playing chess for about six years, so it was only natural to combine two things he loved.

“One of my brother’s friends introduced me to the game in 3rd grade when I followed them to a chess club and loved it,” Eisenhauer told the Daily Dot in an email.

“My first Dragon Con was around that same time. My brother helps the Star Wars track, and I started cosplaying as a Jawa for the parade.”

“Three years ago, I took my chess set to DC, just to see if anyone wanted to play. They did, and some people even gave me tips! I donated those tips to charity, and decided to really try to do some fundraising the next year.”

In addition to playing for fun, Eisenhauer regularly competes in U.S. Chess Federation approved events and plays for his school team, the Westminster Chess Cats. He tells us his current rating is 1739. Outside of chess, he likes gaming, comics, sci-fi and logic puzzles, and is currently training for a marathon with his dad.

Eisenhauer says he’s only donned the mask of the Chess Jawa for Dragon Con. “This was my second year really trying to raise money at DC.” Any money he raises goes back to the Star Wars track, which like the other convention tracks works to raise money for the yearly Dragon Con charity. “Last year I raised $467, which went to the Atlanta Community Food Bank.”

At Dragon Con, we heard rumors from amazed bystanders that the Jawa had thus far gone undefeated. Eisenhauer confirmed they were true. “I was undefeated this year.  Last year I lost 4 games.  I got some very tough game both years.  (The first year I played I didn’t lose but I only played 15-20 games and didn’t really set up so we aren’t counting that.)”

Eisenhauer tells us people don’t seem to mind that they’ve been bested by a Sand Person.

Most people think the whole idea of a Chess Jawa is pretty awesome. Lots of people come by to see how I’m doing.  People are very supportive of the kid who plays chess for charity, and most just want a picture and a sticker. They aren’t really expecting to win. We give everyone who plays a sticker that says “I played chess with a Jawa.”

Some of my opponents are good chess players. They’ll lose a pawn here and there, but often don’t realize that they are losing until I am able to convert it into an endgame. Usually they are surprised because they didn’t expect to lose, but they laugh and thank me for a good game. They still get a sticker. 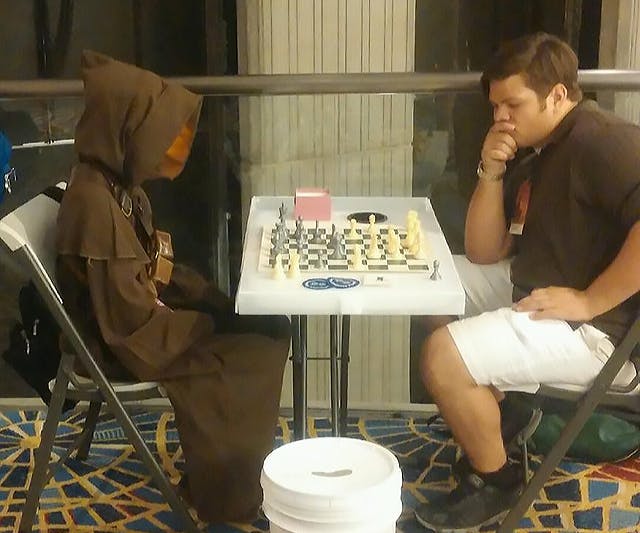 Eisenhauer has a lot to say on the subject of chess in Star Wars, which used to be an official part of the canon with a group of master chess players called Mon Calamari. “There’s nothing official about Jawas and chess, however, but we believe it should be there.” For his part, he tells us his Chess Jawa has founded “the Tatooine Planetary Chess Federation (AKA the Double Sun Chess Club), which is very popular.”

Stephen’s mom, Peggy, tells us that the family is squarely behind his chess-playing efforts, “though we’re not a family of Chess Jawas.”

Stephen spends a lot of time studying chess, and it’s exciting to see his hard work pay off. Our goal is to make sure he has plenty of opportunities to compete at the right level, so he keeps improving.  We have great local events, but also travel to tournaments around the US to get good games. We all love that Stephen has found a way to bring his passion for chess into the Star Wars community, and raise money for charity at the same time. That is a win for everyone!

Peggy noted that despite Dragon Con’s size, “It’s a really a nice community,” and that returning every year feels like a family reunion. Hopefully this means that anyone who missed playing chess with the Jawa this year will have a shot at a rematch next year and beyond.

“Jawas like winning,” Eisenhauer told us, “but we try to show good sportsjawaship by not celebrating our victories too much.”