Behind the epic music of Dragon Age: Inquisition

We sat down with audio director Michael Kent to learn more about the new sound of Dragon Age.

The wait for the highly anticipated release of BioWare’s Dragon Age: Inquisition is finally over. Fans of the fantasy role-playing video game series will be diving into game today, but they may be surprised to find a new take on the franchise’s musical score.

That this time around Dragon Age’s world of Thedas will sound a little bit different from what you remember in the previous games.

While Dragon Age: Origins and Dragon Age 2 featured the work of music composer Inon Zur, Inquisition will instead feature a soundtrack by composer Trevor Morris who is probably best known for his work on TV shows like The Tudors and The Borgias. According to Inquisition’s audio director Michael Kent, the team decided early on that they wanted to give gamers a new experience.

MORE: Prepare to happily pour months of your life into Dragon Age: Inquisition

“It is another Dragon Age game, but it’s the most ambitious Dragon Age game yet, so we wanted to bring something brand new to the table and thought we’d try a new composer to see how it worked,” Kent told the Daily Dot. “Trevor Morris is really good at writing themes and bringing really epic music to the table.”

While they wanted to explore something new in Inquisition, Kent said, they also wanted to include some of the old music fans would recognize. The underlying score may be different, but there will be familiar themes in the game.

Music has been an integral part of the Dragon Age series from the beginning according to Kent, who emphasized that audio is 50 percent of the game-playing experience. It supports the visuals and story, helping to get players emotionally involved and fully immersed in the game. For Inquisition the team started working on the audio at the beginning—earlier than they’d ever started before on a game.

“So I think what you’re going to see is an even more focused experience with the audio as it plays with the rest of the game. Musically we changed a lot of stuff. We wanted to go with a more epic score and redesign and reimagine the sound of the game. We looked at past games, pulled out what we liked and picked what we didn’t like and went with the more focused sound,” Kent said. 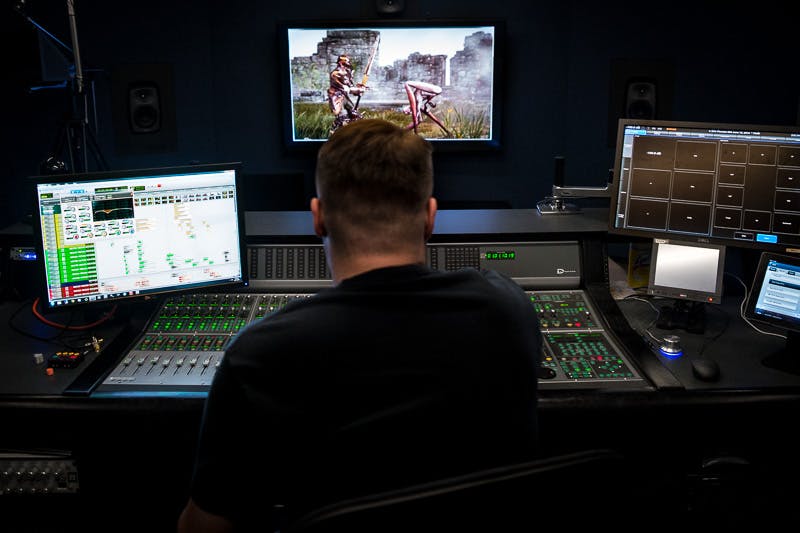 At the beginning of the process the team worked on nailing down the main themes and defining the style. Morris wasn’t brought until two years into the process. Once that concept work was done, they moved on to production, waiting to record until September. Kent said the biggest challenge was finding the theme for Ferelden, an agricultural region in southeastern Thedas. As for his favorite part of the soundtrack, he singled out that fans should especially listen for the bad guy theme, which he called “epic and awesome.”

Fans were able to get a taste of what the soundtrack will be like when the Inquisition main theme premiered on the Electronic Arts blog in October.

“We were really happy that the theme turned out right so we thought, ‘Let’s get it out’ and it actually helps build hype for the game,” he said.

Fans will have to play the game to hear the rest of the Inquisition score, and they’re certainly eager to hear more of what Kent, Morris, and the team have created.

“I love the battle within the serenity, the chaos of adventure—this is so well composed!” wrote one fan who listened to the main theme early on SoundCloud.

There are also those fans who miss original composer Zur. One fan on SoundCloud asked what happened to Zur and wrote that this main theme “has great orchestration and arrangement, but the motif is kind of lacking.” Discussion and debate over the soundtrack has been going on for months among fans on BioWare’s forums as well. Some fans prefer the old soundtracks even though they like Morris’ new theme, because they don’t think it sounds quite like Dragon Age. Common sentiment, however, seems to be that Morris has done a great job of bringing an epic feel to the series. Fans are so eager for the soundtrack those with early access to the game started uploading it to YouTube so others could listen before the release.

The only thing I want more than #DragonAgeInquisition, the game, is the soundtrack.

I’m listening to the #DragonAgeInquisition soundtrack via YouTube and I’m in tears. So beautiful! This music hits me hard and I love it.

I’m honestly losing my shit over how good the music from Dragon Age: Inquisition is. I don’t feel like I’m going to make it until Tuesday.

The overall positive response to the music and the passion fans seem to have for it is certainly a testament to the hard work and creativity of the team, but also shows how important music truly is to the whole experience.

“It is becoming more important because a trend right now is that less is more with music. You want to have music when it matters so you don’t want it all the time,” he explained. “You just have it when it will have the most emotional impact. The trend towards that is good because having music all the time can be tiring to the ear. With this game we found the right moments to have the right music and the balance is really nice.”

Gamers who ordered the deluxe edition of Inquisition will also receive the soundtrack. Those who didn’t can purchase all 39 tracks for $12.99 on iTunes.