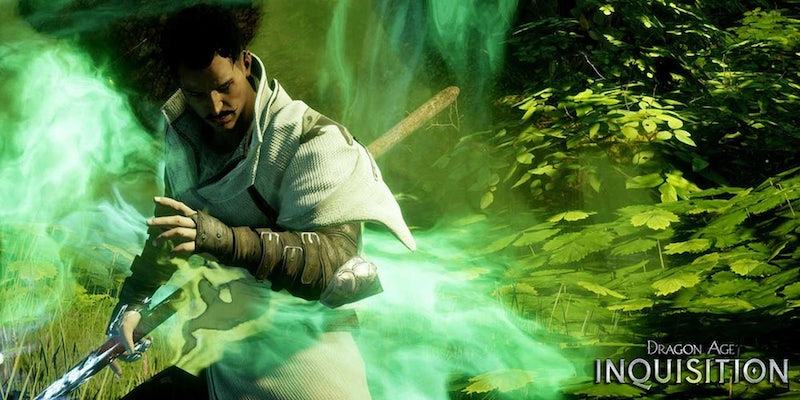 The Dragon Age franchise of fantasy role playing games is a bastion of progressive sexuality in the triple-A video game industry. David Gaider, the lead writer on the franchise at developer BioWare, has shared that the newest game in the series, Dragon Age: Inquisition, will feature the franchise’s first gay character.

Dragon Age has previously featured bixsexual non-player characters who can establish relationships with male or female protagonists in the game. Dorian, introduced on the Dragon Age: Inquisition website on Friday, is written as a gay character and will be a romance option exclusively for male protagonists.

BioWare is revered by the progressive-minded video game community for taking the lead on depicting characters of varying sexualities. In Dragon Age: Origins, released in 2009, players could make the main character gay, straight, or bisexual by virtue of which non-player character or companion the player chose to romance.

Love triangles were also possible, and could be maintained throughout the entirety of the game by carefully navigating dialogue choices, but usually the player would have to choose one lover or the other at the insistence of one or both of the NPCs they were romancing.

Inclusivity in video games is a personal imperative for Gaider as the lead series writer. In response to an email from a woman who praised Gaider for including the option to play as a lesbian character in the Dragon Age series—giving her the opportunity to see herself in a video game—Gaider said:

“We make roleplaying games, which means that the character you play doesn’t have to be yourself, but I believe there’s an element where having a game acknowledge that you exist can be validating in a way most people never consider—no doubt because they have no need for validation, and thus no knowledge as to what the lack of it can do to someone.”

Dragon Age: Inquisition is scheduled for an Oct. 7 release on PC, PlayStation 3, PlayStation 4, Xbox 360, and Xbox One.