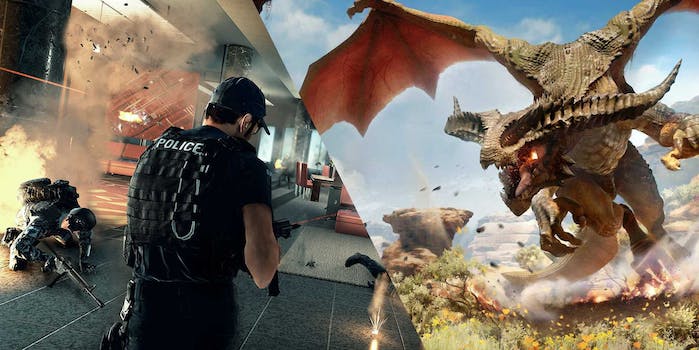 The substantial delay for Battlefield: Hardline is probably a good thing.

Patience is the name of the game for EA fans today—both Dragon Age: Inquistion and Battlefield Hardline have been delayed.

First, the forthcoming fantasy role-playing game from BioWare has been pushed back by six weeks, its launch date changed from October 7 to November 18 in North America, and three days later, the 21st, in Europe.

Executive developer Mark Darrah explained the postponement on the game’s website, saying that “this last bit of time is about polishing the experience we want you to see.”

“Ensuring that our open spaces are as engaging as possible. Strengthening the emotional impact of the Hero’s choices,” he continued. “And ensuring the experience you get is the best it can be in the platform you choose to play on.”

Meanwhile, EA has delayed the release of Battefield: Hardline by considerably longer; the scheduled October release has been scrapped. The latest title in the Battlefield franchise, which abandons the traditional military theme for a cops-and-robbers setting, is now slated for an early 2015 release.

The response to the shooter’s multiplayer beta released at E3 2014 was lukewarm, and DICE VP and general manager Karl Magnus Troedsson has admitted as such in a blog post explaining the timetabling decision (albeit in a very sugar-coated fashion).

“Millions of you jumped in [to the beta] and had a great time. As a result… [we] learned a lot from players about what they wanted in the game… The more we thought about these ideas, the more we knew we had to get them into the game you will all be playing,” he continues. “However there was only one problem. We would need more time. Time that we didn’t have if we decided to move forward with launching in just a couple of months.”

Troedsson promises greater “multiplayer innovation,” as well as “single player story depth” and “stability” as just some of the benefits that will come from the delayed launch.

Perversely, rather than being a black mark against DICE, Battlefield’s push back actually bodes well for the Battlefield franchise. Previous Battlefield releases have been disasters, requiring patches to fix endemic, game-breaking bugs. That EA is eschewing the game-a-year model that has previously produced such poor results can only work in the game’s favor, giving the developers the extra time for bug-fixing that they have, until now, so clearly been lacking.