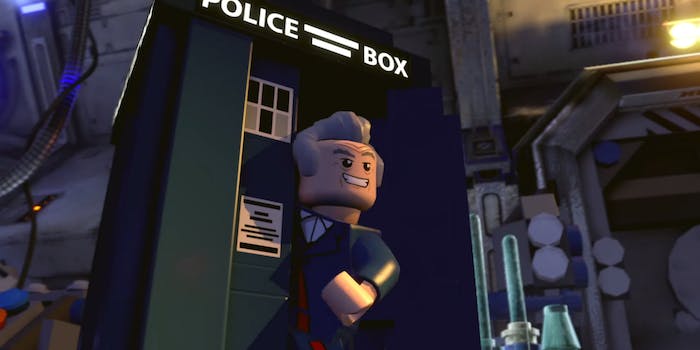 Doctor Who invades Lego Dimensions in the latest game trailer

The Daleks are right behind him.

Lego Dimensions trailers are checklists for all the new Lego you’ll be adding to your collection when the game is out.

A wide range of characters from famous science fiction and fantasy franchises make an appearance in Lego Dimensions, the latest entry in the slate of video games like Skylanders, Disney Infinity, and anything compatible with Nintendo’s amiibo figurines. Doctor Who is on the cast list, and the new Lego Dimensions trailer gives us our first concerted look into the Doctor’s role in the game.

According to Warner Bros. Interactive Entertainment, all the Doctors will be featured in the Lego Dimensions Doctor Who level. You begin as the Twelfth Doctor, voiced by Peter Capaldi. When he dies in the game, you take over as the First Doctor, and when he dies you take over as the Second Doctor, etc. The interior of the Tardis will change to match the era of whichever Doctor you are playing as.

You also in the new trailer get a glimpse of the Portal– and Back to the Future-related content in Lego Dimensions. We’re very curious as to how the story is going to tie all of this together into a coherent plot. The Lego Movie similarly had Lego characters jumping between realms, and Lego Dimensions stars the same core cast of characters as the movie. Perhaps Lego Dimensions is going to act as a de facto sequel?

We really hope that all the various incarnations of the Doctor featured in the new trailer will get their own Lego minifigures.

Lego Dimensions will be released on Sept. 27 for PlayStation 3, PlayStation 4, Xbox 360, Xbox One, and Wii U.