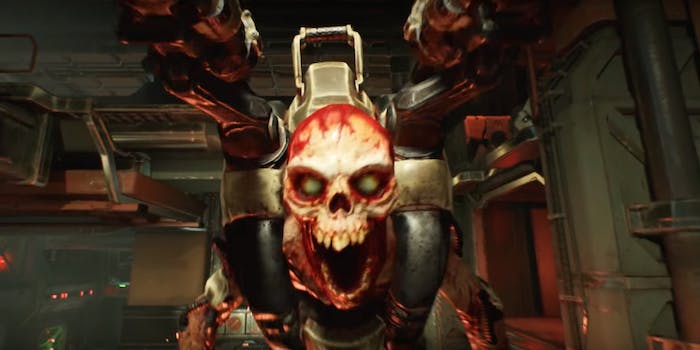 Doom gets a release date and an intense new trailer

The blood and gore in the teaser for the new Doom, which debuted at Bethesda’s E3 2015 presentation, caused a ruckus within the “won’t someone please think of the children” crowd.

Those people haven’t seen anything yet. Along with the news that the game’s release date is May 13, Bethesda released the new Doom campaign trailer on Thursday, and it goes beyond even the E3 video in terms of graphic content.

Bethesda also revealed a $120 Collector’s Edition that includes a 12” statue of a Revenant demon. That’s the guy with the rocket launchers strapped to his shoulders, because plain old demons aren’t bad enough. Demons with guns, though—that’s truly something to fear. The demon statue stands on an LED-lit base that contains a slow-moving turbine, just to make sure it grabs the attention of your office mates.

The regular and Collector’s Edition versions of Doom are now available for pre-order. Regardless of which one you select, you’ll score exclusive multiplayer skins and customization options, plus multiplayer power-ups called Hack Modules.

Doom will be released for PC, PlayStation 4, and Xbox One.