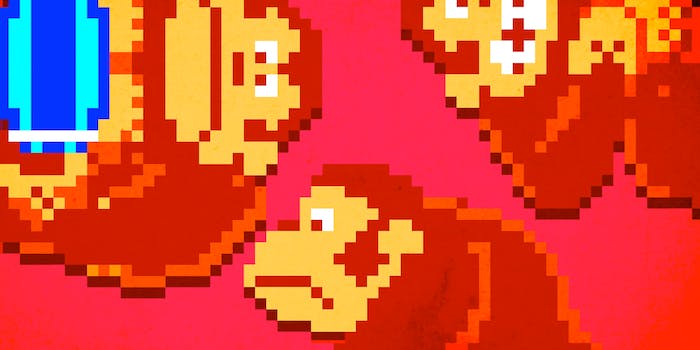 See 35 years of Donkey Kong history in one cool infographic

On July 9, 1981, Donkey Kong landed on American shores via a brightly colored arcade cabinet developed by a Japanese company named Nintendo. The video game world would never be the same.

The cabinet had ice-blue side panels and a large decal of a cute cartoon ape holding aloft a blond-haired damsel in distress. He was being chased by a funny little man in red coveralls and cap. The little man was Mario, then called “Jumpman.” The ape was Donkey Kong, and no one predicted he would turn into one of the most famous symbols of the arcade culture of the 1980s, right up there in importance with Pac-Man.

Donkey Kong was one of the earliest games designed by Shigeru Miyamoto, who would go on to create the Super Mario Bros. and The Legend of Zelda franchises. But Donkey Kong, not Mario or Link, was the first iconic Nintendo character to be propelled to stardom.

The original Donkey Kong cabinet is still at the heart of game culture 35 years after it first arrived in arcades. It was at the heart of the quintessential documentary about the competitive arcade game circuit, King of Kong, and attempts to set new world records on the Donkey Kong arcade machine are still making headlines in 2016.

There is at least one Donkey Kong game to be found for each generation of Nintendo’s consoles, from an arcade port on the Nintendo Entertainment System to original titles on the Wii and Wii U. Today we celebrate the 35th anniversary of Donkey Kong’s invasion of America by taking a look at all the different games the big ape has starred in.

Click here to see a bigger version of this infographic.