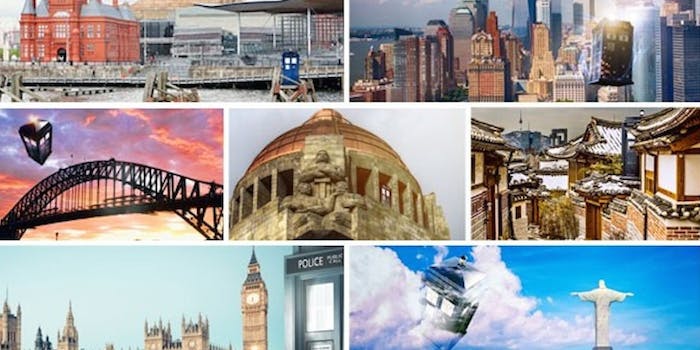 The new Doctor Who could be coming for you

Seven lucky cities are getting stops on a promotional tour for season 8.

Whovians around the world might just get an official visit from the Twelfth Doctor and his TARDIS thanks to a new tour announced by BBC Worldwide Tuesday. The new Doctor Peter Capaldi, Jenna Coleman (who plays companion Clara Oswald) and (as he’s available) Doctor Who lead writer and executive producer Steven Moffat will be traveling to seven cities on five continents in August to promote the premiere of season eight.

Doctor Who: The World Tour will start Aug. 7 in Cardiff and end on Aug. 19 in Rio de Janeiro. Along the way, the tour will stop in London, Seoul, Sydney, New York, and Mexico City. Publicity and fan events will take place at each of these locations.

While Capaldi and Coleman will be visiting all these cities, it’s unclear yet what cities Moffat will join the tour in due to his production commitments. So far it looks like he will at least miss Sydney, Australia.

“I’ve always thought we’d all be a lot safer if the Doctor conquered the world, instead of the Daleks,” Moffat said in a statement. “Now with Jenna and Peter leading the charge, it looks like it’s going to happen. I’ll be bringing up the rear to handle the exposition scenes, and maybe carry some bags.”

Fans who want to take part in the fun but can’t be in any of these cities can keep up with events by checking out the hashtag #DWWorldTour on Twitter. Already the fandom is using it to express their excitement—and some disappointment—about the tour.

What? #DWWorldTour not coming to Paris? :(

“It’s fantastic that so many people across the world love Doctor Who. After 8 months solid filming deep in the world of monsters, Jenna and I are thrilled to be heading for the Planet of Fans,” Capaldi said in the same statement.

Doctor Who season 8 is set to premiere on a still-unspecified date in August.