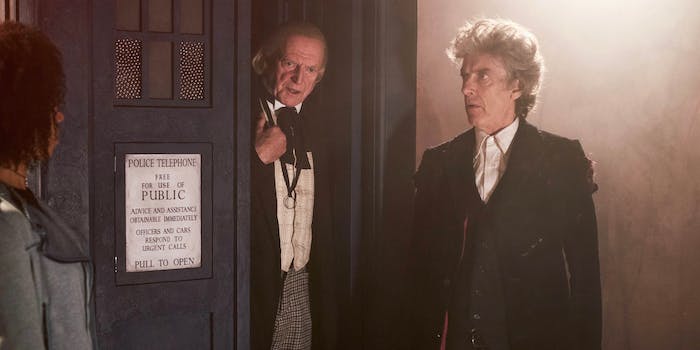 The Twelfth Doctor's swan song had its highs and lows.

Warning: This article contains spoilers for the Doctor Who Christmas Special, “Twice Upon A Time.”

This year’s Doctor Who Christmas special marks the end of an era as Peter Capaldi hands over control of the TARDIS to Jodie Whittaker, and his send-off strikes at the heart of its own sentimentality mixed with dashes of old-fashioned sexism.

One of the big draws of “Twice Upon A Time,” written by departing showrunner Steven Moffat, is the return of the First Doctor, this time played by David Bradley, who first encompassed the character as William Hartnell (the original portrayer of the First Doctor) in the BBC TV movie An Adventure in Space and Time. You need not to have watched any Classic Who beforehand, as the episode begins with perhaps the most far-reaching “previously on” we’ve seen yet: 709 episodes ago, the Doctor was dying after an encounter with the Mondasian Cybermen in “The Tenth Planet, which is shown by Doctor Who transitioning from archival footage from 1966 to modern-day.

If the old black-and-white footage and different TARDIS didn’t give you the indication that the First Doctor wasn’t of our world, his demeanor might. He’s a bit of a curmudgeon who’s often at odds with the Twelfth Doctor, and although he once stole a TARDIS, he can’t quite grasp the concept of a sonic screwdriver or sonic sunglasses.

He’s also characterized as a product of his time who has no problem suggesting that Bill Potts (Pearl Mackie) should clean the TARDIS (after lamenting that his companion Polly isn’t there) or threatening to smack her on her backside if she used colorful language again. A World War I captain (Mark Gatiss) who was transported to the South Pole from the battlefield joins in after encountering a glass woman, saying that all women are made of glass.

The comments are a setup for the Twelfth Doctor and Bill to interject, but after the second, third, and fourth times it becomes somewhat redundant. The characterization might not ring true with some fans of the First Doctor, but the point the sexist comments make—’60s-era Doctor Who was a very different time, mind you—is already driven home by the archival footage.

As the episode demonstrates, the First Doctor is a Time Lord we don’t know but one with a familiar dilemma. Like the Twelfth Doctor, he’s faced with the uncertainty of death (and regeneration, when a Time Lord’s body physically changes once its old body is nearing death), he is attempting to do all he can to put it off. It causes time to stop at a standstill, sending that captain to them at the South Pole. And hovering above them is a glass woman who has come to collect the captain, offering to return Bill—who was turned into a Cyberman—to the Twelfth Doctor in exchange.

Bill’s back in the flesh and not quite there, and the Twelfth Doctor never quite trusts her upon her return. She’s the character remember, but she’s also at times a plot device, being one of the forms the glass woman, who’s known as Testimony, takes. Testimony initially appears to be another nefarious foe the Doctors must face, but it’s more complicated than that: she’s part of a system designed to gather the thoughts and minds of people before they die so that they may live on. The captain is meant to die on that battlefield and his death is inevitable, so she has come for him.

The first hour of “Twice Upon A Time” is a bit of a jumbled mess as the two Doctors do all they can to escape their own inevitability before it delivers a poignant third act. Testimony isn’t another foe to defeat, she (and it) is a technological means to an end. The captain—whose name is revealed to be Archibald Hamish Lethbridge-Stewart—a relative of Doctor Who’s famous brigadier—accepts his death and asks the Doctors to look after his family. And here is where the Doctors work their magic as they invoked one of Moffat’s most famous Doctor Who moments: “just this once, everybody lives.”

The captain (and the German soldier facing him) were moved forward in time by a couple of hours, putting them in the middle of the Christmas Truce of 1914, a day when British and German soldiers put down their weapons in an armistice and celebrated Christmas alongside one another. It wouldn’t last forever and soldiers wouldn’t see anything like it again, but for a time there was unexplainable peace in their midsts.

But in the end, everyone must let go of their own fears and face their fate. The First Doctor needed to embrace his own regeneration so that he could eventually become the Twelfth Doctor. The Twelfth Doctor needed to face his own fate, but not without a few farewells from the companions who knew him well: Bill, Clara Oswald (Jenna Coleman), and Nardole (Matt Lucas). And as he embraces the next step—choosing regeneration over death—he has plenty of sage advice for his next self, advising them to “never be cruel, never be cowardly, and never ever eat pears.”

Like some of her previous versions, Whittaker’s Doctor arrives on the scene to a TARDIS in chaos. Our time with her is brief, but she’s not a Doctor who—in the initial aftermath—is afraid. After a brief realization, she’s thrust out of her own TARDIS, and while it ends on a cliffhanger, this Doctor is already bursting past the gates. And she’s brilliant.