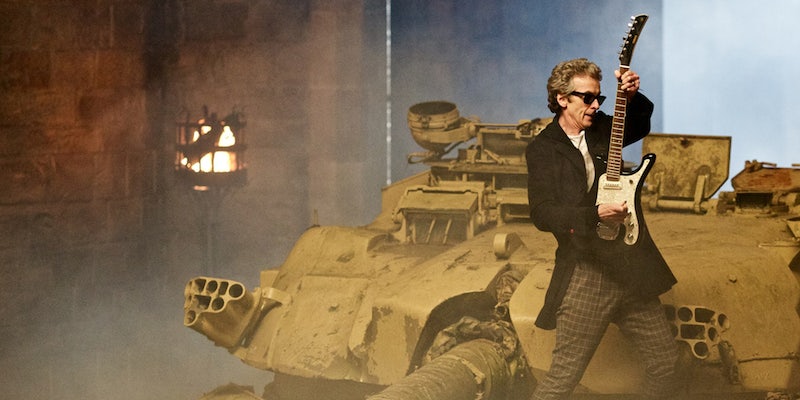 Why low ratings don’t matter to ‘Doctor Who’

Low ratings are bad news, but they don't spell cancellation.

Doctor Who‘s ratings look abysmally bad. The ninth season premiered last week with a U.K. audience of 4.58 million viewers, the lowest since the show’s modern reboot in 2005. Then this week, the second episode’s audience dropped to a measly 3.7 million.

For any other show, this would be a disaster. But while low ratings are bad news for Doctor Who, they don’t spell cancellation.

The first thing to watch out for will be whether the ratings pick up once the Rugby World Cup is over. This weekend’s England v. Wales rugby match meant many families were watching that instead of Doctor Who, and will doubtless catch up on BBC iPlayer later on.

Then, there’s the fact that Doctor Who‘s U.S. ratings have never been better. Over the past couple of seasons, the BBC has made an effort to push the show to an international audience, screening certain episodes in cinemas and sending the lead actors on a worldwide press tour last year. So, as with other overseas hits like Downton Abbey, U.K. ratings are no longer the be-all and end-all of the show’s survival.

The most important (and obvious) thing to remember is that Doctor Who is a really big deal. In terms of longevity and cultural significance, it’s still one of the BBC’s flagship shows. It also makes a buttload of money through merchandise, far more than the BBC’s other popular TV dramas. And if it’s still making money, it’s probably safe.

So, if you’ve read about Doctor Who‘s terrible ratings this season and started to panic, don’t waste your energy just yet. If the audience numbers stay this low we may see the show go through some changes, but there’s no reason to worry about cancellation.