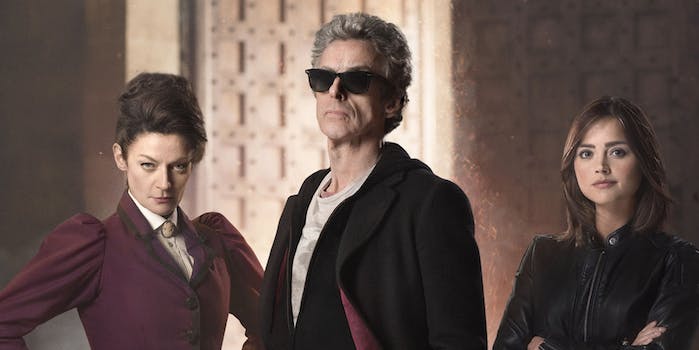 Was this episode's interesting premise strong enough to hold up its muddled storytelling?

Doctor Who‘s ninth season premiere boasts one of the most intriguing opening scenes in years.

On a nameless, war-torn alien planet, we see a young boy fleeing across a battlefield infested with “handmines,” grasping hands that burst up from the ground and drag their victims to a muddy grave. As expected, the Doctor shows up to save the day, and since the episode is titled “The Magician’s Apprentice,” we all assume the child will be rescued and taken under the Doctor’s wing. But then we learn the boy’s name: Davros.

One day, he will grow up to be the Doctor’s greatest enemy, the creator of the Daleks.

Spinning out from a what-if scenario in the 1975 serial “Genesis of the Daleks,” this episode gives us a classic Doctor Who moral dilemma: given the opportunity to kill such a dangerous person when he was still an innocent child, would you take it? As it turns out, the Doctor (kind of) does. He leaves the boy to fend for himself in the minefield.

Back in the present day, Davros is now dying of old age, and is searching for the Doctor so he can speak with him one last time. This is where things start to get a little over-complicated, because we’re presented with yet another subplot: back on Earth, every airplane has frozen in midair. The Doctor’s current companion Clara is called in to try and solve the problem, which turns out to have been an attention-grabbing tactic from the Doctor’s other nemesis, Missy, who is back from the dead. Apparently she just received a copy of the Doctor’s last will and testament, and needs Clara’s help tracking him down before he dies. (It’s a time travel show. Just go with it.)

The episode’s main driving force is the Doctor’s decision to leave the young Davros to die. On its own, this is a fantastic idea, boosted by cool sci-fi details like the handmines and a menacing alien who turns out to be a pile of sentient snakes in a cape. However, the story is so poorly structured that this core dilemma gets lost in a mess of disjointed scenes. It’s easy to imagine casual viewers and younger fans being confused by the jumbled pacing and numerous callbacks to older storylines, which may account for why “The Magician’s Apprentice” got the lowest ratings of any episode since the show’s modern reboot in 2005.

Despite highlights like Michelle Gomez as the gleefully malicious Missy, any emotional resonance is drowned out in a torrent of single-serving setpieces. (For instance, do we really need to see the Doctor play electric guitar to a crowd of medieval peasants, while standing on a tank? No.) To make matters worse, the episode falls foul of the two most common stumbling blocks for Doctor Who writers: maintaining the balance between the Doctor and his companion, and making sure the stakes feel believably high.

For longtime viewers of showrunner Steven Moffat‘s work, these strengths and weaknesses will feel very familiar.

Since Doctor Who is a story about an ancient, capricious alien who likes to hang around with young human women, it’s important for the show to emphasize the strengths of characters like Clara: her compassion, her resourcefulness, her quick wit. Steven Moffat is often criticized for failing to give his female characters enough agency and emotional depth, but to his credit this episode does seem to take that criticism onboard. Gone are the odd jokes about Clara’s appearance, and the presence of Missy leads to plenty of all-female scenes. Unfortunately, just passing the Bechdel Test is not the be-all and end-all of this issue.

For the latter half of the episode, Clara and Missy essentially float along in the Doctor’s wake, following him to medieval England, then to an alien prison, and finally to their (thoroughly unconvincing) deaths by Dalek disintegration beam. Clara’s death is what finally prompts the Doctor to go back in time and confront the young Davros in that minefield, hoping to change history and save her life.

This leaves us with two problems. First, Clara’s most important role in the story is to die and thus provide motivation for the Doctor’s latest morally tormented quest, which in itself is a wildly overused sexist trope. Second, her death feels hollow because we already know she’ll be back for the rest of the season. To be fair, it’s hard to maintain this type suspense in a show like Doctor Who, where the characters are put in mortal danger almost every week. But after five years as showrunner, Steven Moffat should be able to manage it.

With Clara almost certainly returning from the dead next week, the true cliffhanger is how the Doctor will handle the young Davros. Will he really shoot a child in the face, as the final scene suggests? Obviously not. But if he chooses to save Davros and set him on a different path, this could open up exciting new avenues for one of Doctor Who‘s oldest and most influential villains.