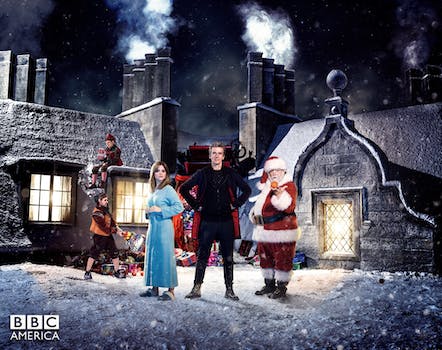 ‘Inception’ meets Santa in the ‘Doctor Who’ Christmas special

This week's holiday-themed 'Doctor Who' was a throwback to earlier episodes, in more ways than one.

In keeping with Doctor Who tradition, this year’s Christmas special was both thoroughly festive and totally nonsensical.

To be fair, “Last Christmas” served its purpose: A funny, fast-paced distraction, perfect to watch after a day of overeating and bickering with your relatives. For at least an hour, everyone could sit down, shut up, and watch the man with the blue box run around and shout at aliens with silly names (this time, it was “dream crabs”). Job done.

The episode relied on a couple of familiar ideas. First, we had a monster that was only dangerous if the characters paid attention to it—strongly reminiscent of Steven Moffat‘s previous creations, the Weeping Angels and the Silence. Second, there was the obvious riff on Inception. “Last Christmas” was a series of dream-within-a-dream scenarios, a concept that explained the episode’s disjointed structure but lost its shine after the second or third time we found out that everyone was still dreaming. (Spoiler alert: Santa Claus wasn’t real.)

Christmas specials cater to a wider audience than the average episode of Doctor Who does. Despite the handful of important continuity moments, such as Clara mourning her dead boyfriend Danny, “Last Christmas” was probably more entertaining for viewers who weren’t very familiar with the show.

One of Steven Moffat’s biggest weaknesses as a writer is repeating himself, meaning that between the snappy dialogue (“There’s a horror movie called Alien? That’s really offensive, no wonder everyone keeps invading you”) and seasonal Santa cameos, we were basically being treated to a rehash of Moffat’s earlier ideas: A new variation on the Weeping Angels, the Doctor rudely ordering Clara around, Danny sacrificing himself (again) and sharing a heartfelt farewell with Clara (again), and the Doctor having a Sherlock-esque moment where he “deletes” his memory of several characters he found boring.

Doctor Who doesn’t always make sense, and more importantly, it doesn’t even need to make sense. The trick is making sure that the show’s often-ridiculous storylines flow in a satisfying way, and to be honest, “Last Christmas” didn’t manage that. Fortunately, Doctor Who fans already know that Christmas specials can be hit or miss. Far more important is what this episode means for the next season.

Right off the bat, let’s get one thing straight: The Christmas special revealed that Jenna Coleman isn’t leaving the show after all. Up until now, Coleman has kept fans guessing about whether she’d return after last month’s season finale, when Clara and the Doctor parted ways. But “Last Christmas” quickly wrapped up their conflict, and the BBC has confirmed Coleman will return for the entirety of season 9.

Critically, season 8 has been better received than previous seasons of Doctor Who, thanks in large part to the casting of a new Doctor, a more coherent story arc, and stronger characterization for the formerly one-dimensional Clara. But despite the fact that the quality of the show improved this season, “Last Christmas” was yet another reminder of Moffat’s bad habit of repeating himself. Doctor Who relies on old favorites like the TARDIS, the Doctor/companion relationship, and a smattering of British historical landmarks, but recent seasons have proven that Moffat’s recycled story tropes (and behind-the-scenes attitude) are beginning to wear thin. Will season 9 see him branch out as a showrunner? Or will he keep trying to repeat the past?