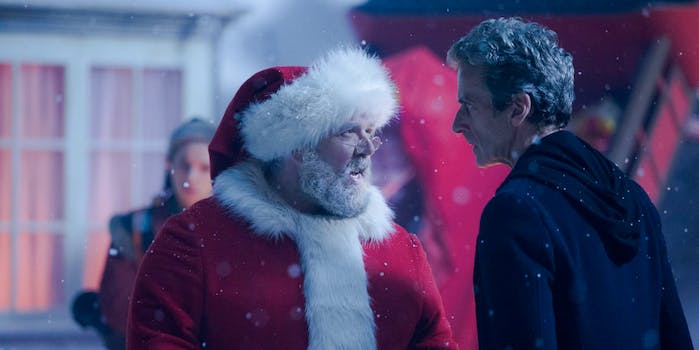 ‘Doctor Who’ Christmas special will screen in theaters after it airs

Grab your eggnog and settle in for official theatrical screenings of 'Sherlock' and 'Doctor Who' this Christmas.

As part of Doctor Who‘s ongoing plan to conquer the world, this year’s Christmas special will screen in nearly 300 U.S. movie theaters.

The show previously screened several episodes in theaters across the world, including Peter Capaldi‘s debut episode and the 50th anniversary special. The only problem this time is that fans will have to wait until Dec. 28 or 29 to see the Christmas special on the big screen. That means either choosing to wait three days after everyone else has seen it, or watching it twice. (We’re guessing most people will go for the latter option.)

The BBC’s episode summary is predictably thin on plot detail but includes obvious draw: River Song is back.

“It’s Christmas Day in the future and the TARDIS is parked on a snowy village street, covered in icicles, awaiting its next adventure. Time traveler River Song meets her husband’s new incarnation, in the form of Peter Capaldi, for the first time this Christmas.”

This will be the Twelfth Doctor’s first episode without his longtime companion Clara Oswald (Jenna Coleman), who is leaving the show at the end of season 9 next month.

It’s a good time to be a fan of geeky BBC dramas, because Sherlock‘s Victorian-themed holiday special is also receiving a U.S. theatrical release, screening on Jan. 5 and 6. Like Doctor Who, it will be accompanied by bonus material like cast interviews and a tour of the set with showrunner Steven Moffat.