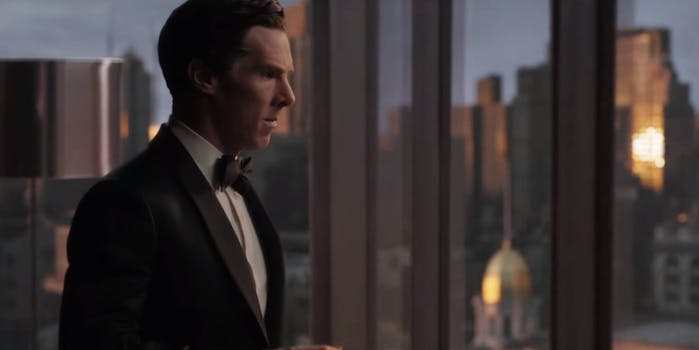 Benedict Cumberbatch learns the 'mystic arts' from Tilda Swinton in the first trailer for 'Doctor Strange.'

We weren’t expecting Marvel‘s Doctor Strange to look like Batman Begins and Inception, but there’s no denying that there are obvious hints of Christopher Nolan in the film’s teaser trailer, which debuted Tuesday night.

Because Doctor Strange won’t be released until November, this trailer is pretty light on details and doesn’t feature any shots of Stephen Strange (Benedict Cumberbatch) performing actual magic.

Instead, the teaser focuses on the earlier aspects of his origin story, with hotshot surgeon Dr. Strange losing the use of his hands, having a breakdown, and finding a new lease on life by learning “the mystic arts” from Tilda Swinton’s quasi-immortal mentor character, The Ancient One.

The Batman Begins comparisons really come into play when Strange meets the Ancient One, a dynamic that strongly resembles Bruce Wayne’s training with Liam Neeson as Ra’s al Ghul. Like Batman Begins, Doctor Strange uses an aesthetic that can best be described as “nonspecifically Asian” but stars a cast of non-Asian actors. (Benedict Wong, who plays Strange’s valet, does not appear in the trailer.)

goodness, I just looked at the #DoctorStrange cast list, and it seems there's once again Asian stuff but no Asian characters? LE. SIGH.

Swinton’s casting already raised some eyebrows among Marvel fans, because the Ancient One is typically depicted as a Tibetan man. In an interview last year, Marvel Studios boss Kevin Feige said that Strange would “head east” rather than traveling specifically to Tibet—a decision that some Hollywood conspiracy theorists suspect is an attempt to court Chinese film distributors—but that the film would retain the “mysticism” of the comics.

Judging by the trailer, that means putting actors like Swinton, Chiwetel Ejiofor, and Mads Mikkelsen in costumes that are visually coded as Asian, performing roles inspired by Hollywood tropes from Asian fantasy martial-arts narratives.

Doctor Strange, directed by Scott Derrickson, should otherwise be a welcome departure from Marvel’s somewhat repetitive aesthetic formula. The visual effects already look more interesting than the usual disaster-movie explosions of the superhero genre, and Marvel has promised some psychedelic scenes to rival the comics.