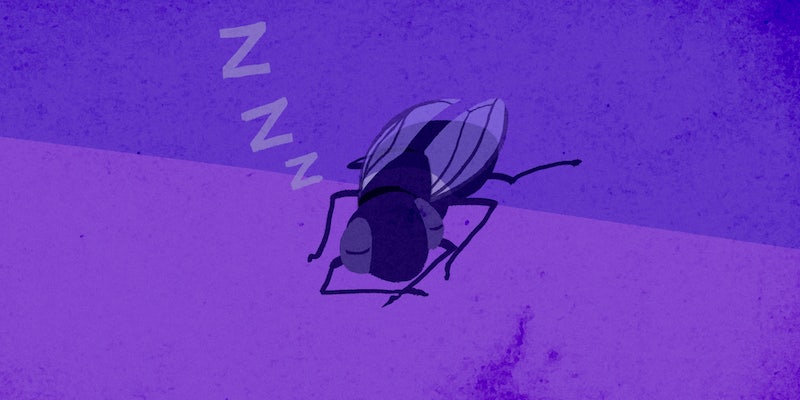 Have you ever laid awake at night wondering if the crickets chirping outside ever sleep? You’re not the only one.

According to a National Geographic article on the same topic, we know that fruit flies, honeybees, praying mantises, and cockroaches sleep. One of the ways scientists can tell a fly is sleeping is that it might be more prone to falling in the direction of gravity, and it might take more intense stimulation to get it to act alert.

We actually use fruit flies and honeybees in research to understand the basics of human sleep, since internal clocks that tell them when to go to sleep and wake up (i.e. their circadian rhythm) works in a similar way to that of people. Since their nervous systems are less complex, it’s easier to examine how environmental cues and sleep deprivation affect the nervous system.

The National Geographic article also mentions that one researcher developed a device, lovingly called the “insominator,” to study what happens to honeybees when they are sleep deprived. The researcher tagged bees with tiny bits of metal and used magnets to jostle the bees awake. Turns out that sleepy bees are poor at communicating, just like people.

Sleep is pretty ubiquitous in the animal kingdom, so we know it’s important. But it’s not clear to scientists why animals need to sleep. According to an article in Popular Science, having a central nervous system seems to be one of the big factors that determine if an animal needs to sleep. Chances are, if you can think of it, it probably sleeps: bony fishes, sharks, birds. They all sleep, and sometimes in really bizarre ways.