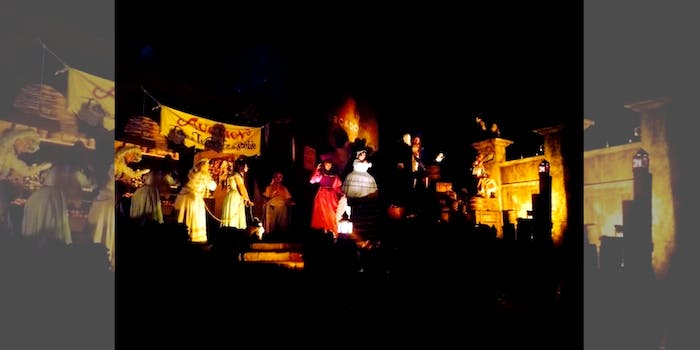 A pirate's life for she.

Disney is pulling the outdated bride auction scenes from its “Pirates of the Caribbean” rides and swapping them with a booty loot led by the “wench” at the center scene.

According to Variety, Disney Parks announced the change on Thursday in a blog post. While the change won’t be made at Disneyland until next year during routine maintenance, Disneyland Paris’s changes will be in place when the ride reopens July 24. Disney World will also swap out the bridal auction.

The scene, which currently depicts multiple women lined up to be auctioned off under a sign that reads, “Auction, Take a wench for a bride,” will be completely altered. In its place will be multiple villagers giving up their valuables under a sign that reads, “Auction, surrender yer loot.” The bride depicted at the center of the current bridal action scene will be recast in the new scene as a pirate, holding a rifle and wearing a feathered hat to oversee the mass surrender.

Previous updates to the ride made “in the spirit of moving forward” have also included the pirates’ objectification of women. One scene depicting two pirates chasing after women was altered to show the women carrying trays of food, implying the pirates were chasing after food instead. Another scene of a pirate chasing women now shows the woman shooing the pirate out of her home.

“From introducing characters from the film saga, to the technology and story enhancements, changes to our attractions are done in the spirit of moving forward what Walt Disney inspired. We believe the time is right to turn the page to a new story in this scene, consistent with the humorous, adventurous spirit of the attraction,” Disneyland spokeswoman Suzi Brown said in a statement to the Hollywood Reporter.

Not familiar with the infamous bride auction scene? View a clip of it below: