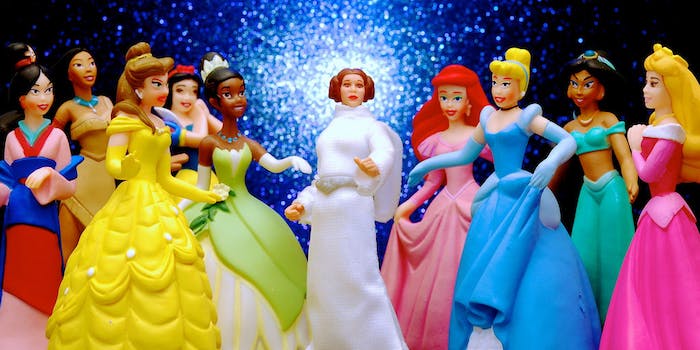 Another reason female fans are getting frustrated with Disney.

Star Wars fans come in all shapes and sizes, in every gender and race, and are found in all corners of the world. The diversity of the fanbase is one of the most exciting aspects of being a part of the Star Wars fandom. Unfortunately the Star Wars films have never really reflected that diversity and while hopes were high that things may change with new movies and TV show being released under Disney, signs keep leading fans to believe they’ll be disappointed.

Female fans in particular have been consistently let down by recent news—especially the lack of women in the new Star Wars: Episode VII cast. That disappointment continued this week when it was revealed the Disney Store has no plans to create products inspired by Princess Leia. The revelation came last Tuesday when King’s College London graduate student Natalie Wreyford asked the Disney Store why there weren’t any Princess Leia products in the store. The store responded on Twitter with a cheery signoff that has done little to pacify fans.

@nataliewreyford Currently, there are no plans for Leia products at Disney Store, Natalie. Have a wonderful day!

The news spread, being covered by outlets like Jezebel and The Mary Sue, and fans continued to push Disney for an explanation. After being told to contact the store directly, Wreyford and others received a reply Wednesday that their inquiry was being sent to the relevant department.

@nataliewreyford I had 2nd reply: “We have escalated your query to the relevant departments, who will be in touch within 5-7 working days”

Disney’s new Star Wars products were also featured on the StarWars.com blog Wednesday. The post explains how the Disney team had to make the difficult decision about what characters to include in the first wave of action figures and settled on figures from A New Hope. These figures include Luke Skywalker and Han Solo but leave out Princess Leia, who is as much of a main character in the trilogy as the others. Instead the other figures are Darth Vader and a nameless Stromtrooper. Many of the comments question where Leia is in the line. One commenter asked “Are they trying to connect with all kinds of Star Wars fans or just their middle-aged male selves?”

Ironically, the blog post features Nomi Vela, the Disney Store project design director for boys and girls, who shares her experience of falling in love with Star Wars. She apparently played with her Barbies “but even though gender lines were fairly strictly drawn in the late 1970s, she also played with her older brother’s Star Wars toys as well as watched the original trilogy over and over when they arrived on video.” According to Vela, it was one of the ways the two bonded.

It looks like those gender lines have not changed much since the 1970s. Little girls can definitely play with these action figures despite the lack of Leia, but when you look at the Disney Store online they only appear when you click the boy gender category. In fact, within the Star Wars toys and apparel there is no girl gender category at all. It looks like other little girls will have to continue playing with their brothers’ toys.

A further look at the online Disney Star Wars collection reveals 100 total items. When you search by gender, five items for women pop up. These items include gender neutral products including iPhone cases, a mini glass, and lunch tote. The only women-specific item is a 77 tee. The only products featuring Princess Leia include a book titled Vader’s Little Princess, a LEGO figure in the Millennium Falcon set, and appearances on a wall decal and T-shirt along with other characters.

This is yet another example of Disney apparently focusing on Star Wars as a “boy franchise” and making no effort at diversity. Over the last few months, fans have complained not just about the new cast but also how the female characters in the upcoming animated show Star Wars: Rebels received reveal trailers last and did not appear in the initial wave of action figures.

It doesn’t make much sense considering how much the fans love the few female characters that do exist in Star Wars and that Disney has profited from their own princess collection. It is possible they are waiting to somehow include Leia in their princess-specific product line instead of with their Star Wars products, but turning Leia into just another Disney princess will surely not please fans.

The hashtag #WeWantLeia has grown on Twitter over the last week, showing that fans won’t be giving up their demands for Leia products anytime soon.

what’s up with no princess Leia? Little girls can like Star Wars just as much as boys do, do why no Leia toys Disney? #WeWantLeia

@disneystore As a mom of boys, I <3 #StarWars bc of strong female characters. I guess luckily we own figures from the 70s. #WeWantLeia

Disney Consumer Products did not respond to a request for comment.

“The current assortment of Star Wars product at Disney Store launched earlier this year and is just the beginning of what is to come. We are excited to be rolling out new product in the coming months, including several items that will feature Princess Leia—one of the most iconic characters in the Star Wars galaxy.”

When asked why the original tweet that sparked the #WeWantLeia campaign stated there were no plans for Leia products, the spokesperson said “Given the limited number of characters, the tweet went out without the full context about what is to come.” Disney did not respond to a follow-up question asking why it was decided to not include these Leia products in the first wave of the Star Wars line.

Over the last week the #WeWantLeia campaign started a petition demanding Disney include Leia in their merchandise. The growing campaign most likely inspired Disney to release a statement, but it appears the company is just saying there were plans to feature Leia all along. Not including her in the first wave of merchandise, however, continues to send a discouraging message to female fans of the series already worried about the representation of women in the franchise.