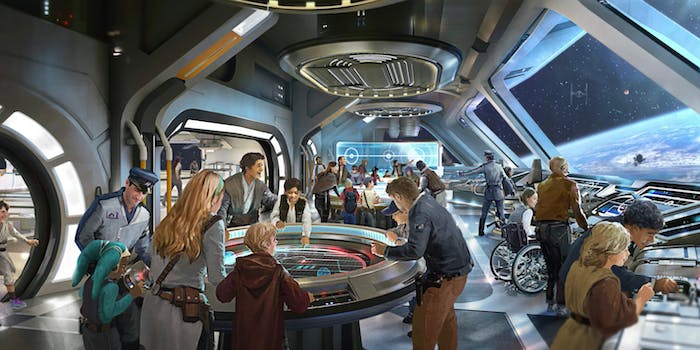 Here's your chance to become a citizen of the 'Star Wars' galaxy.

Disney’s upcoming Star Wars theme park plans to transport users to the world inhabited by the Resistance and the First Order, but as it recently revealed in a new sneak peek, the park itself isn’t the only thing for Star Wars fans to get excited over.

A new post on the Disney Parks blog gave fans a look at the new resort Disney is building that’s inspired by Star Wars. The resort doesn’t have a name yet, but it will be “seamlessly connected” to Star Wars: Galaxy’s Edge, the Star Wars-themed area located at Hollywood Studios.

Disney could have probably just decorated the rooms Star Wars-style and left it at that, but the resort is taking the theme even further. It’s not just a resort, but rather an immersive experience, one complete with boarding a ship when you arrive at the resort, costumes, and interactive stories that occur during guests’ “multiday Star Wars adventure.”

Concept art for the resort, featured in a video posted by Disney, shows guests standing around controllers and looking over battle plans as a battle takes place in the middle of space just outside their windows.

“At the resort, guests immediately become active citizens of the galaxy and can dress up in the proper attire,” Jennifer Fickley-Baker, Walt Disney World Resort’s editorial content manager, explained. “Every resort window will also have a view into space. The opportunity for immersion at this resort will also stand out among all Disney resorts around the globe, as it will be seamlessly connected to Star Wars: Galaxy’s Edge at Disney’s Hollywood Studios, allowing guests a total Star Wars experience.”