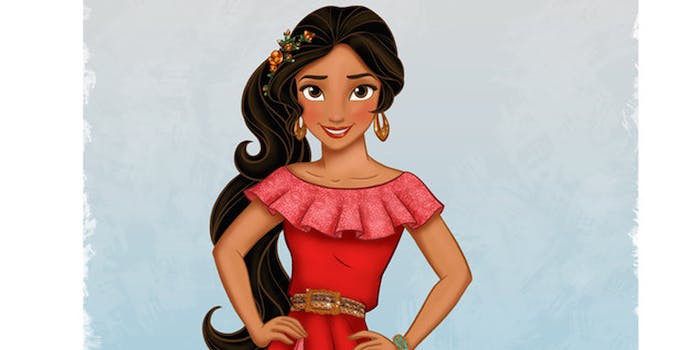 Disney announced on Thursday that it’s finally introduced a Latina Princess, and her name is Princess Elena of Avalor.

The first four Disney princesses were white, if you count a mermaid as a human being, with a specified ethnicity. In 1992, we got Aladdin’s Princess Jasmine, she of indeterminate Middle Eastern heritage, but it’s taken another 23 years to give us our first Latina princess. But before we get too amped for Elena’s arrival, it should be noted that she is going to appear in an episode of an already existing Disney Junior series—not as the headliner of her own feature-length film. She’s scheduled to appear in a 2016 episode of Sofia the First, an animated series about a young princess that has other princesses in recurring roles.

According to a statement from Disney, Princess Elena is “a confident and compassionate teenager in an enchanted fairytale kingdom inspired by diverse Latin cultures and folklore.” Allusions to folklore conjure images of the 2009 Disney princess flick The Princess and the Frog, which drew some criticism for its depiction of black characters in the south. It’s not a stretch to imagine that references to “Latin cultures” will be less than subtle, but progress is progress.

Now you might be asking yourself, “Where is Avalor?” Much like Agrabah, and Genovia, and a land far, far away before it, Avalor is a fictional place. The Disney Wiki informs us “The Amulet of Avalor is a mystical and magical amulet that bestows upon its wearer magical abilities of her own.”