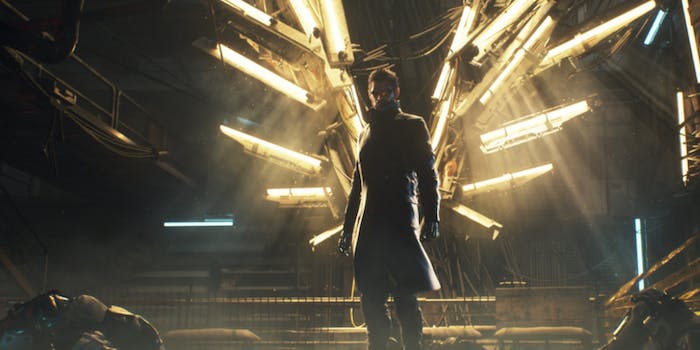 A Russian website on Tuesday leaked news about the next game in the popular cyberpunk Deus Ex series, while publisher Square Enix was still running a viral campaign to reveal the game.

The core of the viral campaign, an alternate reality game on Twitch which began Monday was almost immediately pegged as a Deux Ex reveal. The hashtag “Can’tKillProgress” attached to the campaign was an obvious reference to the debate over the ethics of cybernetic enhancement, that defines society in the modern day Deus Ex games. Observers of the Twitch stream on Monday also picked up on hints that some of the characters in the video were cybernetically enhanced.

It’s unlikely, therefore that anyone who paid a modicum of attention to the viral campaign was surprised when Russian pop culture website Kanobu revealed the existence of Deus Ex: Mankind Divided. Some Kanobu readers didn’t seem to be pleased with the early reveal, however, complaining about breakage of nondisclosure agreements and prompting a statement from the site (courtesy of Google translate).

The Can’tKillProgress Twitch account officially revealed the game at 9am PT, and the trailer, of course, was immediately on YouTube.

What we saw of the viral campaign consisted mostly of looped footage of characters in a nondescript room, what we would guess were inexpensive costumes, and more actors without speaking roles than actors with. We imagine that Square Enix still got its money’s worth, even if the reveal was blown a day early.