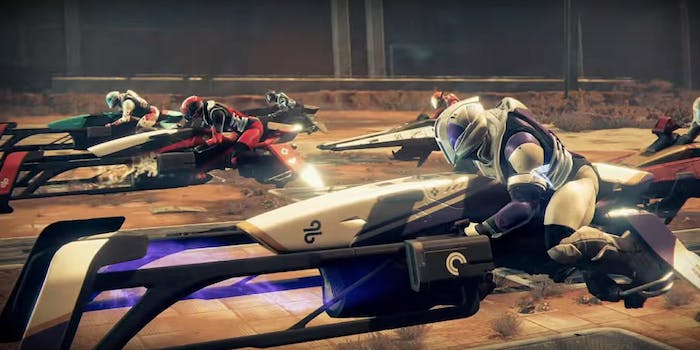 Destiny opens Sparrow Racing League for a limited time only

Bungie has delivered on one of the most popular Destiny fan requests.

Start your Sparrow engines, and get ready for some entirely fresh Destiny content.

At the PlayStation Experience fan event held on Saturday, Destiny developer Bungie revealed the Sparrow Racing League, a three-week event that will take place on an easy virtual course on Mars and a more difficult course on Venus. Special racing suits and unique vehicle designs will be integral parts of the event, with new items added for microtransaction purchases.

If the event is successful—and, given the popularity of the little bikes, that seems likely—Bungie could incorporate fan feedback into other Sparrow racing events in the future.

Sparrows are fast, nimble vehicles in Destiny that resemble a cross between a racing motorcycle and a speeder bike from Star Wars. They are so quick, so agile, and so much fun to drive that Destiny fans have been asking for something interesting to do with them ever since the game was launched in September 2014. Bungie was apparently listening to fans who wanted to do more than just drive their Sparrows around from place to place.

Sparrow racing is demonstrative of Bungie’s new plan to release small pieces of free and original content over the next year, rather than focusing on paid, large chunks of new content like the expansion packs The Dark Below and House of Wolves.

Bungie has also released one of its trademark ViDoc behind-the-scenes videos to talk about the conception and development of Sparrow racing for Destiny. The video also hints at possibilities for the future.

Destiny’s microtransaction system will also be supported by the Sparrow Racing League. The Bungie blog post announcing the Sparrow racing event says that “Eververse Trading will have some flair to make the event a little more fun, and a little more stylish.”

The Sparrow Racing League opens on Dec. 8, and ends on Dec. 29. Whether there’ll be more opportunities to race the bikes in the future remains to be seen—but considering that Sparrow racing is based on fan input in the first place, more chances to ride sounds like a reasonable outcome.