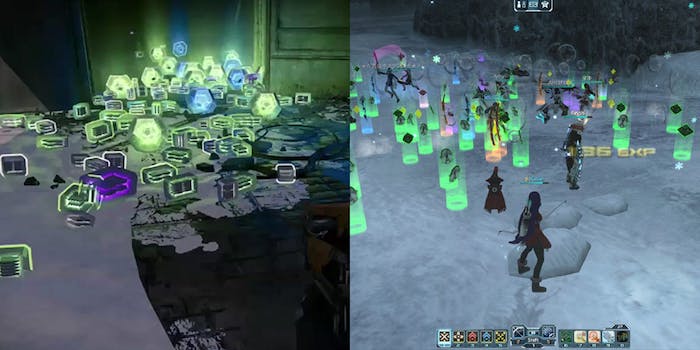 Is Destiny borrowing from the old Phantasy Star Online game?

Someone made a chart to line up the similarities.

When does homage cross the line into a lack of creativity? Is genius really knowing who to, um, borrow from? And just how much did the developers of Destiny borrow from the design of Phantasy Star Online?

In video game terms, something released in 2001 is old, and something released in 1987 is ancient history. Whispers from ex-PSO players that Destiny had a lot in common with Phantasy Star Online were easy to ascribe to either rose-colored glasses or faded memories. And then this image showed up online.

Some of the comparisons are obviously tongue-and-cheek, but the vast majority of them are dead-on accurate. The inclusion of the soccer ball in the Tower in Destiny felt apropos of nothing when we first saw it. Now it makes perfect sense as homage.

NeoGAF and Reddit users are more than happy to acknowledge the similarities between the two games, although not all the posters are happy about how accurate the comparisons seem to be.

“People should stop comparing Destiny to PSO. It leaves people that loved PSO with really high and unmet expectations for Destiny,” wrote NeoGAF user lyrick. “I may have actually enjoyed the bullshit design of Destiny had I not experienced a better level and loot system with PSO 13+ years prior.”

The thing is, this sort of long-lasting fandom for Phantasy Star Online might be precisely why Bungie built so directly on the inspiration they took from the game. The game’s legacy has remained so strong that the free-to-play Phantasy Star Online 2 was released in 2012 for the PC and PlayStation Vita, over a decade after the original was released on a system that current hardcore gamers may have never even touched before.

Bungie recently announced that 3.2 million people are playing Destiny every day, even on weekdays, and that players average a total of three hours of play time per session. Those are excellent numbers a month after launch, especially when the game in question lacks content and its special event doesn’t even seem to function properly, or at least not as promised.

If those Destiny numbers indicate as strong a potential level of fandom as that which is enjoyed by Phantasy Star Online, borrowing heavily from PSO may be what enables Bungie to put their 10-year plan for Destiny into action and keep the game relevant for the entirety of that decade.