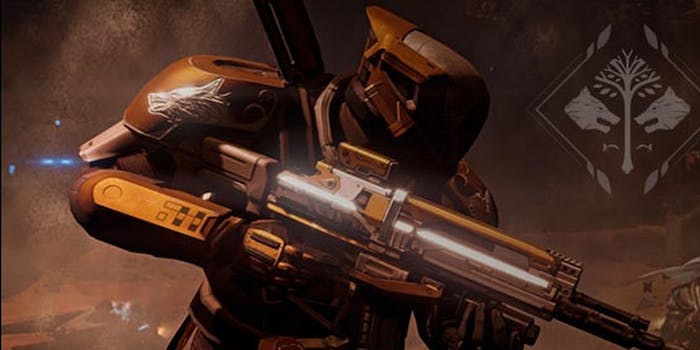 Something is seriously not right with this gameplay video.

The Crucible in its default mode is supposed to account for differences between character levels and the power of their weapons and armor, and balance everyone’s stats to provide a fair competitive environment. The “Iron Banner” event currently running in Destiny, however, is supposed to deliberately not correct for any of those potential imbalances, in order to provide for a more punishing PvP experience.

For instance, if I have an Exotic auto-rifle (a super-rare version of the weapon that does terrific damage), and you have the very first auto-rifle you picked up during the tutorial mission at the beginning of Destiny, I ought to wipe the floor with you each and every time we go head-to-head in an Iron Banner event.

A Destiny player who goes by “OohaPieceaCand y” on YouTube actually did go into an Iron Banner event with the very first auto-rifle he picked up during the tutorial mission, and rather than getting wiped off the floor, he wrecked almost every player he went one-on-one with.

There are possible explanations for this, other than the Iron Banner event not working as intended. The star of our video could be cleaning up after kills initiated by his teammates. But then one would expect to see him being awarded mostly with Assists and not Kills, as you see him racking up in the video.

It’s possible that the other players he is facing just really, really suck, and they keep missing him, and that “OohaPieceaCand y” is consistently landing nothing but headshots, but that doesn’t seem very likely, either.

The one thing that defies explanation beyond “this isn’t working,” however, is how a Level 4 character (who can only wear armor you wouldn’t bother to stop and look at if you found it on the ground), can manage to take multiple hits from high-level characters, who are surely sporting some killer weapons, without immediately dying.

We reached out to Bungie for comment. In reference to the video, a representative told us: “There will likely be a response to the below in tomorrow’s Bungie Weekly Update on Bungie.net.”