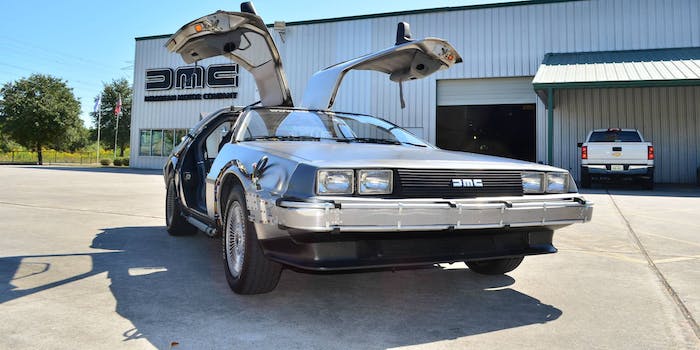 We visited the DeLorean Motor Company in Houston to go under the hood of this iconic car.

In Back to the Future Part II, Marty and Doc Brown travel into the future to Oct. 21, 2015—and everybody remembers the vehicle that got them there.

The DeLorean has become synonymous with the Back to the Future series. The company’s sporty DMC-12 with its iconic gull-wing doors helped make time travel cool in the 1980s, even though its iconic status long outlasted its short-lived original manufacturing run. Luckily for us, there’s a company in Houston that specializes in building, maintaining, and restoring DMC-12s.

The DeLorean Motor Company was started by automotive engineer John DeLorean in 1975 and produced cars for two short years starting in 1981. During that time, the company only made one car: the DMC-12. It was designed by Italian designer Giorgetto Giugiaro, with help from Colin Chapman, founder of sports car manufacturer Lotus. After the original DeLorean Motor Company went bust, many owners of the DMC-12 found themselves without a manufacturer to help them maintain their cars.

“It took no time at all for the owners at that time to realize that the dealers were not very well trained and didn’t know really what they had,” said Stephen Wynne, CEO of the revived DeLorean Motor Company.

Wynne is not your typical CEO. He’s an engineer but ultimately a car guy at heart. You can hear the excitement in his voice when he talks about the DMC-12.

Wynne always had a fascination and love for American cars but found it hard to pursue those passions while living in England. “Obviously, being a car guy, to do the things in life that I wanted to do was not possible in Europe. So we came here in 1980. Because I’m an English and French car mechanic by trade, [we] just set up shop in L.A., fixing English and French cars … And along came DeLorean, which is an English and French car.” Word quickly spread among DeLorean owners that Wynne’s shop in California could service their cars and do it right. Wynne found himself in the middle of a market that needed his expertise. 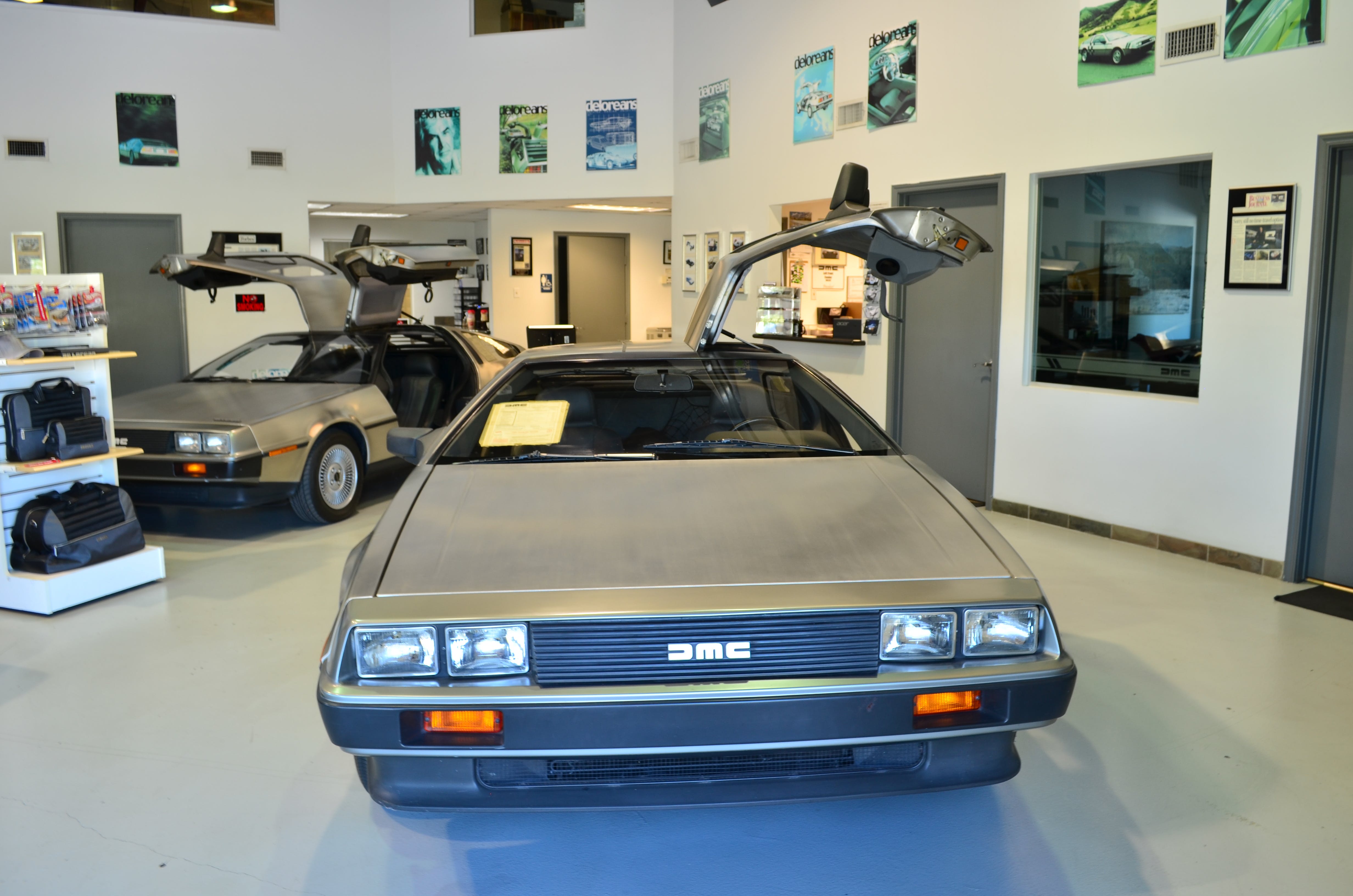 Wynne, along with another business partner, bought as many of the remaining DeLorean parts they could find and created a company called DeLorean One. Eventually Wynne relocated in Houston and parted ways with his business partner, rebranding as the DeLorean Motor Company. 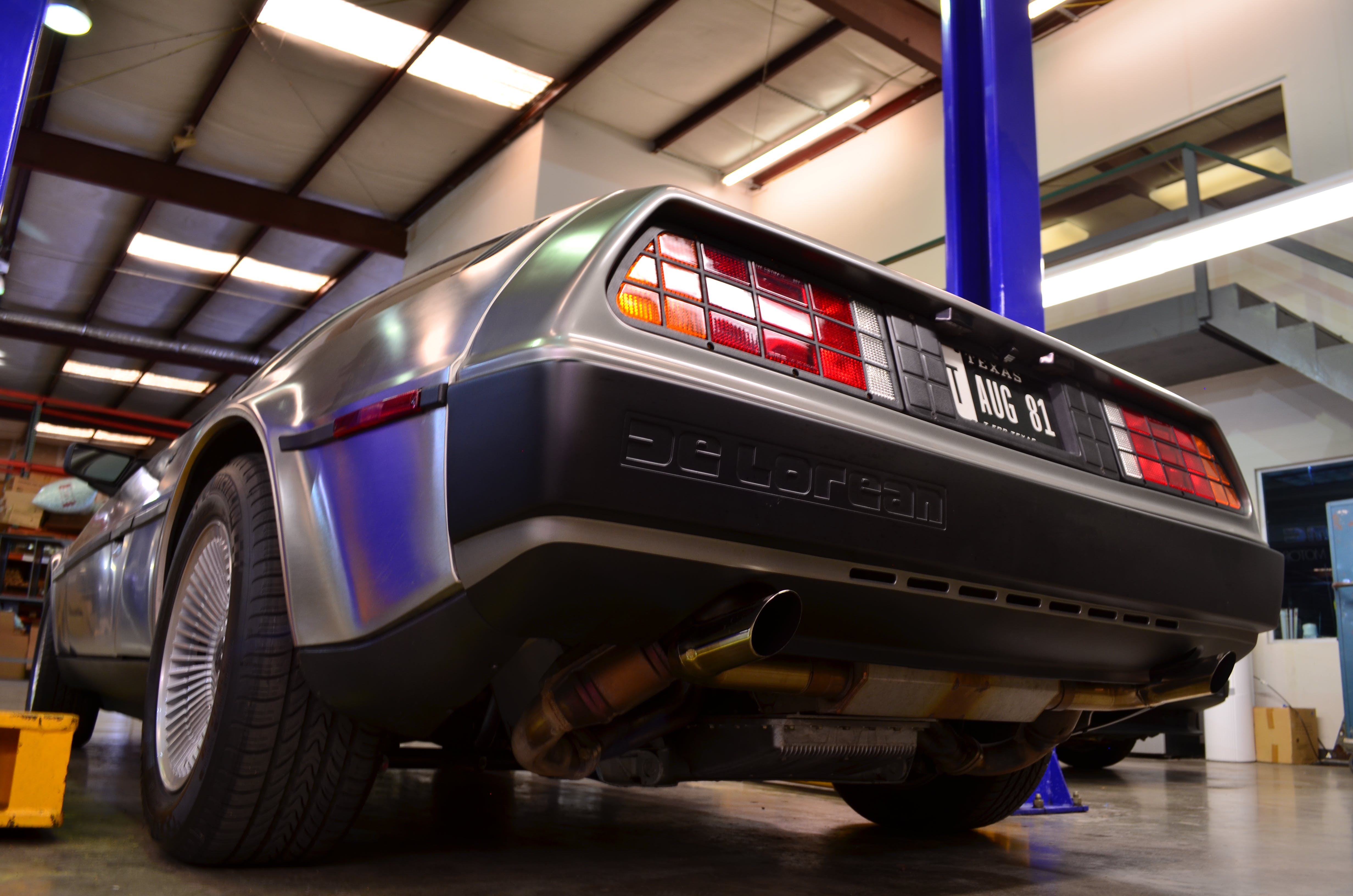 Thanks in large part to the Back to the Future series, there’s still a healthy market for these unique and classic vehicles. Wynne said many of the people interesting in owning a DMC-12 are young, tech-savvy guys who want the ultimate geek car—not your traditional classic car aficionados.

The Internet has made it easier for buyers to hunt down DeLoreans for sale from private owners. It’s also been a way for fans to find the DeLorean Motor Company.

The company isn’t manufacturing new DMC-12s—and there’s a reason for that. It’s illegal, “because low-volume production is not allowed in the U.S., unless you conform to current safety standards.” In other words, they’d have to somehow pack the government-mandated safety features of 2015 into the DMC-12’s 1980s body.

But Wynne hopes a rule change is on the way. “There’s an initiative going through the House right now which will allow low-volume production of replicas, which we fall into, and assuming that makes it this year, next year, then we’re back in business.”  Wynne is very excited about the prospect of manufacturing brand new DeLoreans and the modern updates the could be possible. “If we look at V6s today, compared to V6s 35 years ago, they’re more than double the horsepower. So, it’s a no-brainer that we’re going to make the car a lot better.” 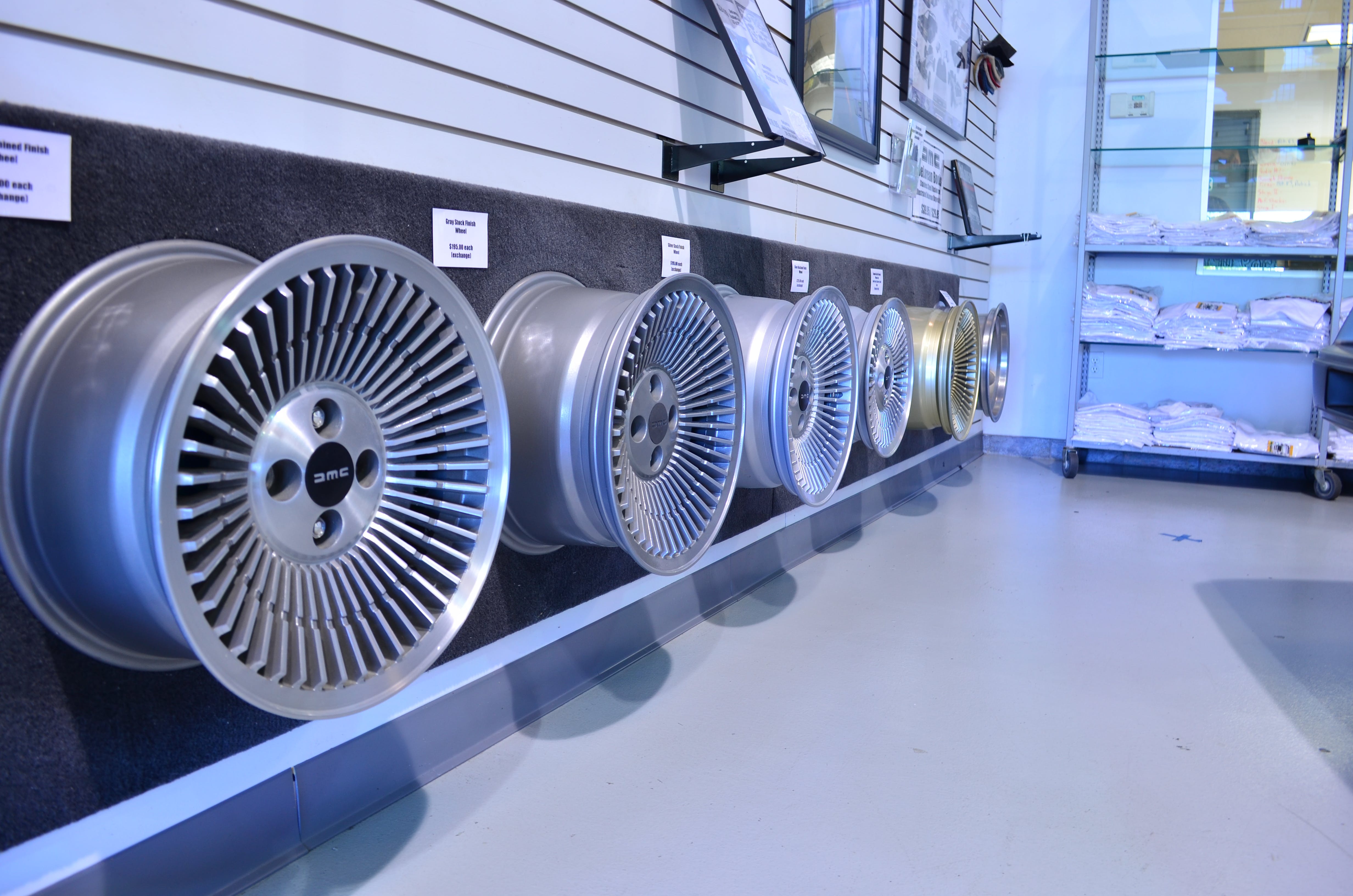 Until then, the DeLorean Motor Company’s restored and refurbished vehicles are the closest thing fans can get to that new-car smell.

Wynne’s company receives all kinds of requests from owners who want more performance out of their classic (and notoriously temperamental) vehicles. Engine upgrades are a top request, Wynne said, “so we developed a performance package where we modified the cylinder heads, changed the camshafts, and added a high-performance exhaust system. So where the stock car came through at a 136 horsepower, we can get them up to a 195.” Wynne also confidently claimed that “we’ve probably done maybe a thousand of these upgrades over the years, and zero failures, so it’s been very successful.”

Considering that the weight of the car is 2,900 pounds, that’s not a bad power-to-weight ratio. Under the hood, what makes DeLorean unique is its engine placement. Being mounted to the rear, it’s like a Porsche 911 or an old Volkswagen Beetle. It has a 68:32 weight distribution, making it tail happy. “It does tend to oversteer when driven aggressively, but it’s an oversteer that’s controllable,” Wynne said.

As striking as the current DMC-12 is, you have to wonder what could have been if DeLorean didn’t go bankrupt. Wynne has aspirations to continue the line as well. “We’ve been talking about that, and we’ve also talked about doing a slight upgrade to the current car, and make the car we want to make, and not the car that was made. After working on the cars for 34 years, we have heard every complaint possible, and we’ve experienced every complaint possible. And we know what we do and don’t like. One of these days we will actually make the car that was never made.” 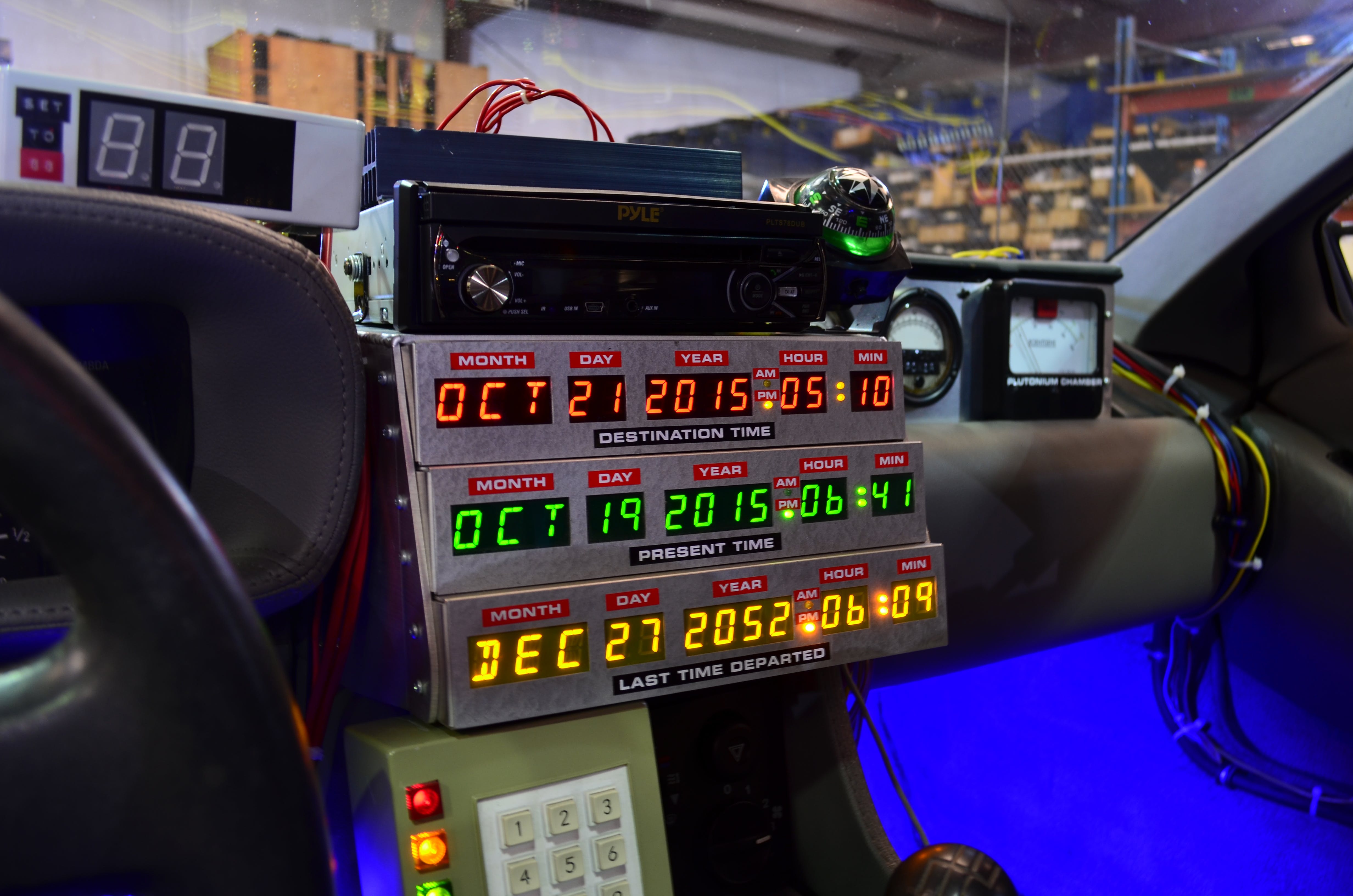 While the DMC-12 can’t be fueled with plutonium or garbage like it was in Back to the Future, that doesn’t mean that Wynne hasn’t been looking at alternative power sources. “We did a proof of concept three or four years ago, actually when Tesla first came out with the Roadster. We thought, ‘Well, if they can do that with a Lotus, we can do that with a DeLorean.’” As ambitious as it would be to make an all-electric DMC-12, “in the end we decided that a small company like us really doesn’t have the resources to do that kind of a development, because it’s a huge undertaking. And we sort of reached out there to see if we could get a technology partner to work with us, to bring the EV platform, but unfortunately nothing really came from it.” Wynne did say he’s very open to anyone in the EV platform business approaching him and reviving the project.

Of course no visit to the DeLorean Motor Company could be complete without a test drive.

Wynne took me for a few laps before handing over the wheel. It was a 3-speed automatic, and the transmission liked to rev high before shifting. There isn’t any power or hydraulic steering, so be prepared to put some muscle behind turns. Since we were driving a stock DeLorean, there wasn’t a ton of power under the hood; your head didn’t hit the back of your seat with you pressed the pedal to the floor. Like Wynne mentioned earlier, it did tend to oversteer around corners, but you feel like you’re in control. Wynne was able to get some speed into a corner, and the DeLorean handled itself well. Braking took the most time getting used to—you had to push much harder than you would in a modern car. Wynne assured me that it’s something you get used to over time.

The real selling point for me was the sound. To put it lightly, it was intoxicating. The rear-mounted engine means that all the noises emanate through the cabin. Just adding a little gas made the engine bellow in a low and guttural roar. Most people forget that this car wasn’t designed to be a movie star. Its primary job was to be a fun-to-drive sports car. Wynne was also generous enough to let me try a manual version of the car. The only manual they had available? A Back to the Future time machine replica. Oh, darn.

The clutch in the car was very heavy and had to be pressed with a lot of force. All the prop equipment added a few hundred pounds to the car’s weight, and you could tell. In the time machine I was more hesitant to throw the car around. The shifter doesn’t have very pronounced gates, so you had to be very aware of where you were shifting. It’s a 5-speed manual, giving it better gas milage over the automatic.

The DMC-12 has a lot going for it. It’s, at the very least, a car you shouldn’t pass up the chance to check out if the opportunity arises.

When comparing the two, I could see most buyers going with the automatic. It is a very comfortable car with plenty of legroom, and the automatic does feel very sporty. The manual is probably best for enthusiasts. It is a grand-tourer, meaning it’s meant for long endurance-type races. “Because it’s so wide, it’s actually a very, very comfortable car,” Wynne said. “I’ve done four cannonball runs in DeLorean’s where I’ve lived in them for a week at a time, and it’s no problem at all.” 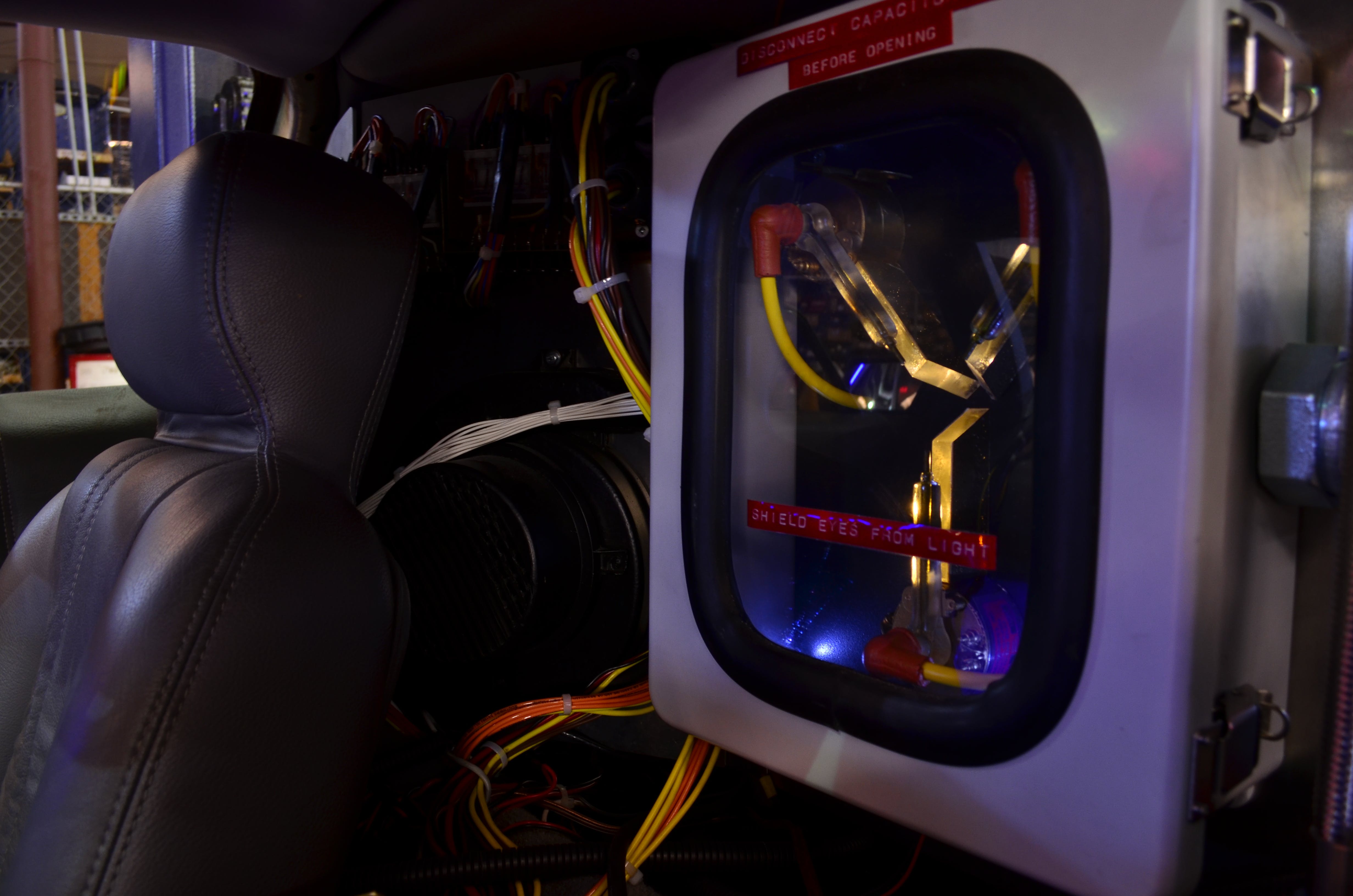 The DeLorean has withstood the test of time. From being an ’80s icon, it has now become a piece of Americana and classic car culture. With the history of the car, the movie, and its design, there’s nothing quite like the DMC-12. And there probably will never be anything like it. We love the DeLorean for everything that it represents, but after seeing the DMC facility and driving one, I finally appreciate it. I get why this car is longed after, and why its value has been skyrocketing the past few years. I get why performance numbers don’t matter, because it’s not about that. The DeLorean is a car that is meant to be experienced and shared. For people to stop at, to look at, to discuss, to bask in. Very few cars will ever, and can ever, do that. And in the words of Doc Brown, “the way I see it, if you’re gonna build a time machine into a car, why not do it with some style.”