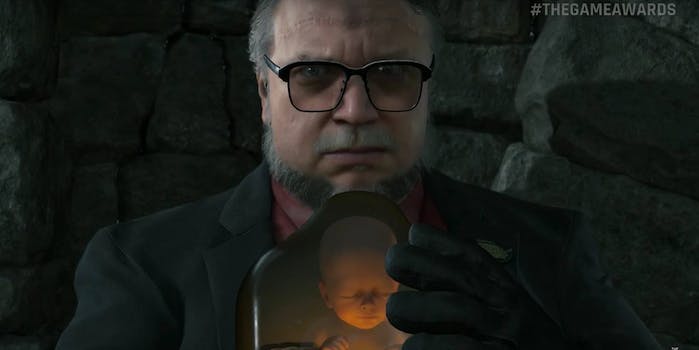 Legendary developer Hideo Kojima made his triumphant return Thursday night to the Game Awards stage, where he grabbed an industry icon award and debuted a trailer for his upcoming Death Stranding game.

While the trailer doesn’t shed any light on what Kojima’s new venture is actually about, it is filled with familiar faces and creeptastic visuals. Master of horror Guillermo del Toro (and Kojima’s partner on the canceled Silent Hills game) is the surprise star of the trailer. He’s seen carrying a living fetus in some kind of life-support vessel as he hides from an ominous military convoy.

Meanwhile, Mads Mikkelsen lurks in a eerie sewer, confirming suspicions that Kojima (a big Mikkelsen fan) cast the Hannibal actor in the game. The atmospheric music in the trailer is a synth track reminiscent of Netflix’s wildly popular sci-fi/horror series Stranger Things.

Announced at E3 in September, Death Stranding is Kojima’s first game since his bitter parting with game studio Konami. In the fallout of the breakup, Kojima was barred from attending the Game Awards in 2015 to accept an award for Metal Gear Solid V. That must have made his appearance and award at this year’s show especially sweet.

Kojima opened his own development company, Kojima Productions, to develop Death Stranding, which in addition to del Toro and Mikkelsen will star The Walking Dead‘s Norman Reedus. The release date has yet to be announced.

Konami cancelling SH after PT is one of the most moronic things I've ever witnessed.