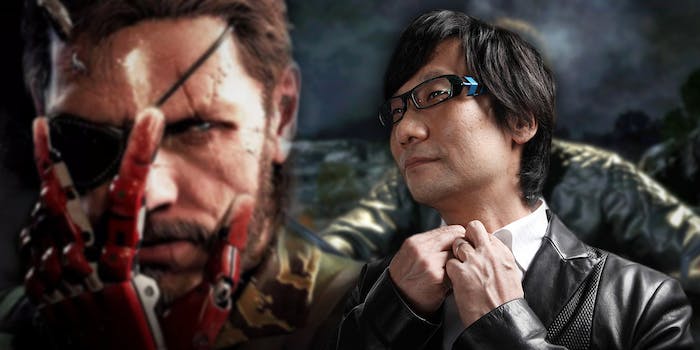 Further evidence of how badly the relationship between the famed developer and venerable publisher has deteriorated.

Breakups in the video game industry are never easy, but they are rarely as epic a disaster as the story of Hideo Kojima and Konami.

Kojima, creator of the Metal Gear series and one of the few developers for whom the “auteur” label has stuck, was not at the Game Awards last night to receive the Best Score/Soundtrack and Best Action/Adventure Game awards won by Metal Gear Solid V: The Phantom Pain.

Kiefer Sutherland, who voiced the role of Big Boss in Metal Gear Solid V, which was released this year to critical acclaim, accepted the Best Action/Adventure Game award on Kojima’s behalf.

Following Sutherland’s acceptance speech, Game Awards host Geoff Keighley disclosed that Kojima’s absence was due to a clause in his still-active contract with Konami that barred him from attending.

The reaction on social media to this latest chapter in the Kojima/Konami debacle was immediate and vociferous.

This is unbelievable. And I'm actually psyched that @geoffkeighley just dropped that. PROPS.

Thank you @geoffkeighley for calling out Konami's bullshit

Konami needs to burn in hell.

Kojima has been developing Metal Gear games for Konami since 1987. The unique presentation, eccentric characters, and complex lore of the Metal Gear franchise has earned respect from critics and inspired devotion from countless fans.

Thus, when it became clear earlier this year that the relationship between Kojima and Konami was dissolving, the stage was set for some of the worst industry drama since the tumultuous breakup of Activision and Call of Duty creators Jason West and Vince Zampella in 2010.

Rumors that Kojima had been fired from Konami began in March, when he lost his executive position at the company. Then Metal Gear Solid V was no longer labeled “A Hideo Kojima game,” as had been the case with every preceding Metal Gear title, and Kojima Productions, the studio behind the Metal Gear games, was dissolved.

In April, it was announced that the highly-anticipated game Silent Hills, on which Kojima was collaborating with Guillermo del Toro and Norman Reedus, had been unceremoniously canceled. In May, Konami announced its intention to focus heavily on the mobile game market, a dramatic change of pace for the publisher, which had a decades-long record of making celebrated games for core consoles.

In August, the Japanese publication Nikkei released a report about the horrible treatment of employees at Konami, which further shifted public opinion in the gaming world against the publisher.

Friday, Oct. 9 was Kojima’s last day at Konami, which felt like the end of the story—until the Game Awards.

Keighley’s disclosure has reopened the wound. If gamers were upset with Konami for its perceived mistreatment of Kojima before, barring him from receiving accolades for Metal Gear Solid V only cements that perception. Smart money bets on this drama being far from over.