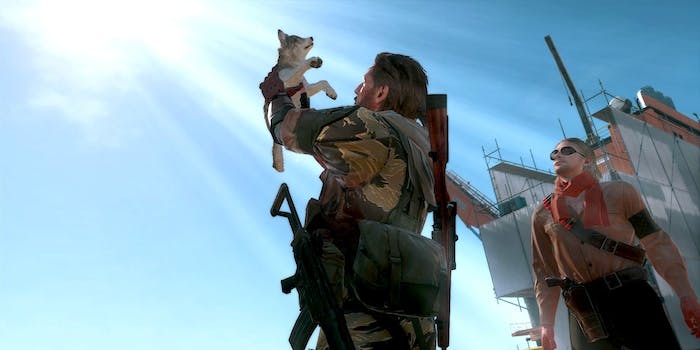 The latest Metal Gear game is the most accessible installment in the series yet.

As Metal Gear protagonist Big Boss’s mentor, The Boss, once said, “The enemies we fight are only in relative terms, constantly changing with the times.” The same could be said about how the Metal Gear series has adapted with each new installment.

As long as it places an emphasis on sneaking and has some form of narrative connection to the prior games, I’m on board. I could understand why some fans long for a single, focused infiltration mission akin to the first Metal Gear Solid, though those same fans might be surprised how Metal Gear Solid V: The Phantom Pain handily preserves the series’ core appeal while delivering an experience that some would argue is long overdue. 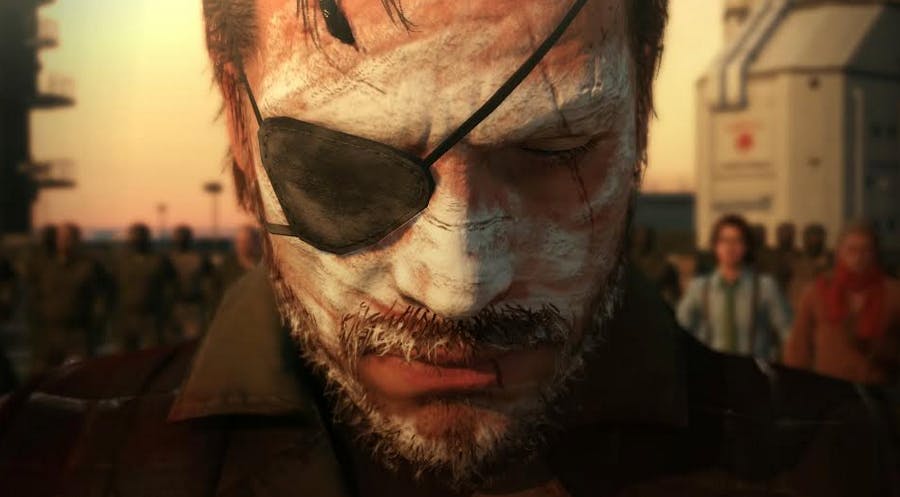 If you’ve surpassed 30 percent completion of the companion prologue, Ground Zeroes, then you’re already prepared both in terms of gameplay and story. A trojan horse-style invasion on Big Boss’s prior Mother Base headquarters left the legendary hero in an extended coma. The Phantom Pain begins upon Big Boss’s awakening in 1984. Partly motivated by revenge, Big Boss, along with Revolver Ocelot and Kaz Miller, quickly enact plans to expand a new Mother Base and build a new army, the Diamond Dogs.

The Phantom Pain is the long-awaited realization of Hideo Kojima’s dream for an open-world Metal Gear. Newcomers might be fooled into thinking that Kojima Productions has been making these kinds of games for years by this initial foray, which is wholly striking. The size and scope of the two main settings are comparable in scale to many open-world games pre-2013. The varied terrain presents natural and believable obstacles that become part of the dozens upon dozens of infiltration missions. Echoing the remote insertion methods of past Metal Gear Solid games, helicopters drop off Big Boss in low-risk zones, which results in some added trekking before he reaches his main objective. These create some ideal opportunities to gather resources and to also better understand the literal lay of the land. 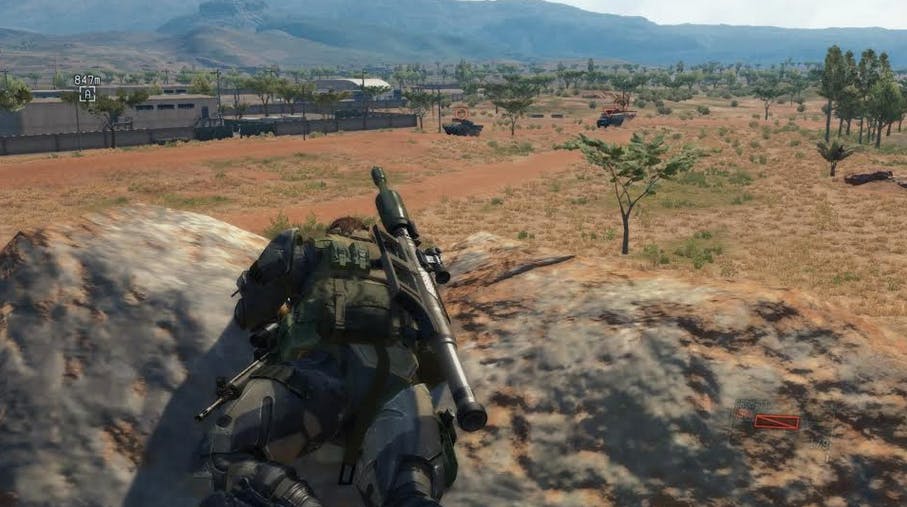 Dominating bases and outposts is a motivator reminiscent of the Far Cry series though Kojima Productions doesn’t copy the design verbatim. While you are awarded for neutralizing every enemy on a given site, you don’t gain permanent ownership of that territory. These places are reused and restaffed with enemies for later missions.

Metal Gear fans whose main draw to the series are the specialist bosses like The Cobra Unit and Foxhound will be disappointed. Nevertheless, The Phantom Pain’s boss fights present their share of challenges. With every mainline Metal Gear Solid game, I can always count on facing a select set of boss fight methodologies. There’s always a boss fight where you simply have to grind it out with heavy weapons and make wise retreats for healing. There’s always a boss fight where I find myself overthinking and upon beating the boss, I feel like a complete idiot for not finding the tactical solution sooner. There’s always a boss fight where you’re afforded a cheap tactic, like the ability to use remote controlled missiles against Sniper Wolf in the original Metal Gear Solid. The Phantom Pain offers all these opportunities, so even if it’s bereft of G.I.Joe-style specialist encounters, these breaks from the main infiltration gameplay are still welcome interludes.

For all its contemporary designs, The Phantom Pain is covered in the fingerprints of the past. The jungles in Africa makes one wish for a Metal Gear Solid 3 remake. The unlockable sneaking suit conjures memories of Solid Snake’s mission into Shadow Moses. Running up stairs and on walkways on Mother Base produces a clanging sound that gives flashbacks of Big Shell in Metal Gear Solid 2. More importantly, The Phantom Pain exponentially expands the series’ notoriety for emergent gameplay, which also happens to be one of the key selling points of well-made open-world games. It’s about sharing mission stories with others and learning that your friends used a set of completely different tactics to clear the same mission. 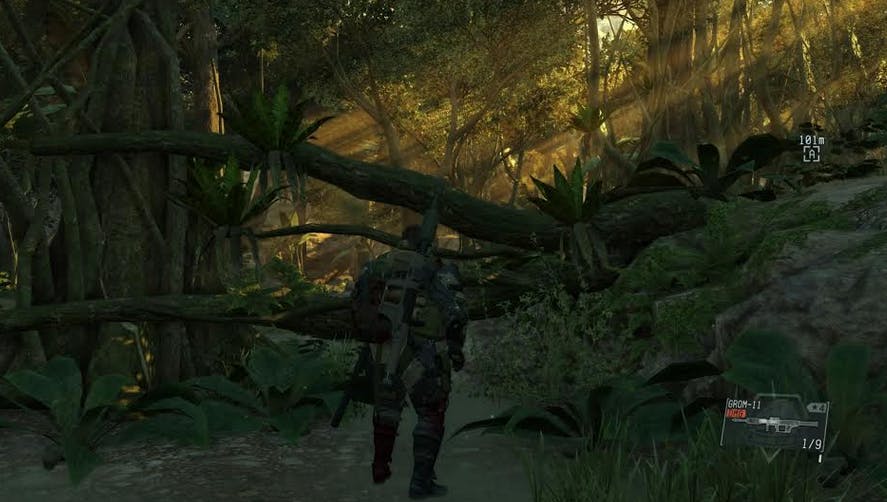 The expansiveness of The Phantom Pain’s setting offers a plethora of situations where you have to act and adapt on the fly. My favorite example involves the interception of convoys, where you’re constantly traveling around a section of the map and using every available explosive to take out lines of traveling trucks, tanks, and other vehicles. Confronting a tank in the middle of an outpost means that nearby guards can disrupt your schedule and your ability to reach the other targets before they exit the map. Maybe you crash your jeep in a hasty attempt to make up for lost time or you come across an exotic animal type that you haven’t captured. The butterfly effect is almost always in play and can even have repercussions beyond the mission itself, specifically the unlocking of new missions.

This relates to the intelligence-gathering component of The Phantom Pain. As a method of adding even more variables and infiltration options in a given sortie, overheard conversations and documents found in the field can mean the difference between spending 15 minutes searching for a target in a compound versus spending two minutes due to learning about the target’s exact location ahead of time. 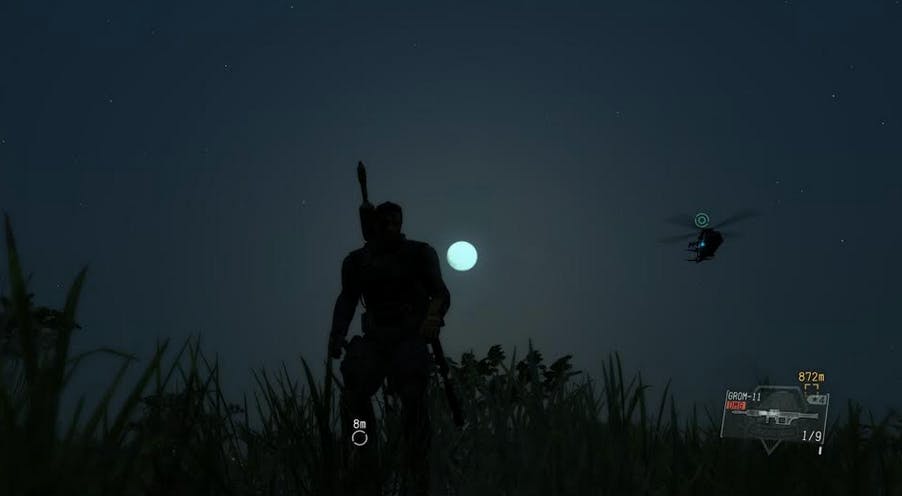 Speaking of repercussions, your enemies’ adaptive behavior to your incessant disruptions is one of the key appeals in a game of escalating armaments and tools between both Big Boss’ army and the opposing armies in the field. Snipe often enough and your foes will invest in helmets. If you tend to sneak at night, expect the enemy to be ready with more flares and lighting equipment. You have every opportunity to respond in kind to intelligence gathered by your soldiers using gear crafted in Mother Base.

The most significant addition to Big Boss’s team of countermeasures is The Phantom Pain’s buddy system, a group of field companions who have their own unique contributions in a given assignment. Your horse is your best source of mobility in the earlier sections of the game—it can handle off-road travels better than any jeep. A dog named DD uses his heightened sniffing talents to spot and mark soldiers obstructed by buildings. Using him is a more tactically rewarding method than, say, using your flight team to bomb the infiltration site to thin out the opposition. And there’s Quiet, the much-publicized sniper who is invaluable during alert phases when half a dozen foes are trying to hunt you down. There are reasons for her scantily clad appearance, though no one will blame you for raising an eyebrow at the explanation. Let’s just say that it falls within the wide parameters of Metal Gear Logic. 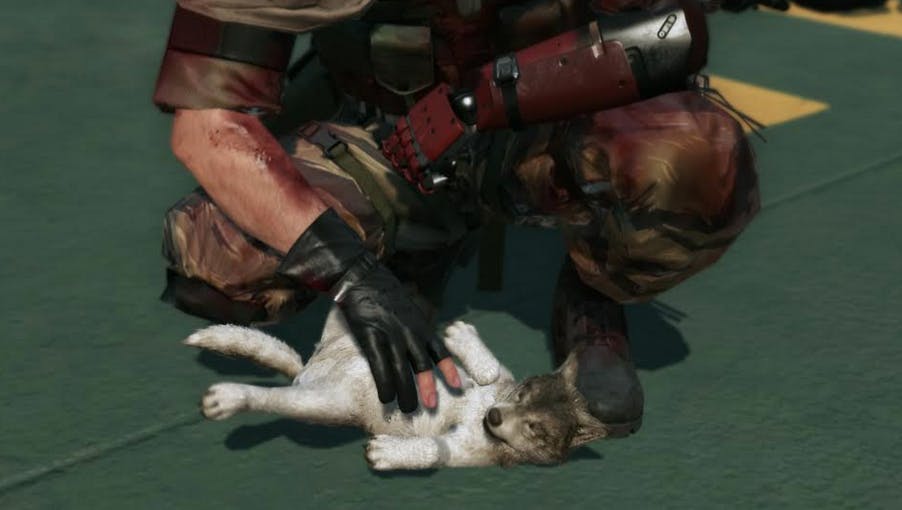 This profusion of tools and assistance speaks to The Phantom Pain’s openness in letting the player decide how easy or difficult they want their playthrough to be. There isn’t a difficulty setting to be found at the main menu, only harder missions (many optional), high ‘S’ rank requirements, and a shopping list of elective tasks. This isn’t a Metal Gear game bereft of challenges, not the least of which includes having the stamina to spend about 30 hours to complete the story, assuming you avoided all the optional missions.

The Mother Base headquarters management component in The Phantom Pain is in tune with Big Boss’ talents as a organizer and leader of warriors without countries. It also serves as a reminder of how fundamentally different he is from Solid Snake. Mother Base’s foundation was laid almost a decade ago in Metal Gear Solid: Portable Ops and was fully realized in Metal Gear Solid: Peace Walker. This latest iteration is the best version of Big Boss’ troop management tool yet. Both Kabul and the Angola-Zaire Border region, The Phantom Pain’s two major settings, are abundant in raw resources, vehicles, and recruits. Thorough searches for resources can potentially interrupt the flow of an otherwise smooth stealth mission, but a successful Mother Base doesn’t require a high degree of obsessive compulsive item hunting. What’s more important is that you keep your staff busy with their own combat deployments and base expansion projects. The more staff you have, the more opportunities there are to build more advanced weapons and gear. 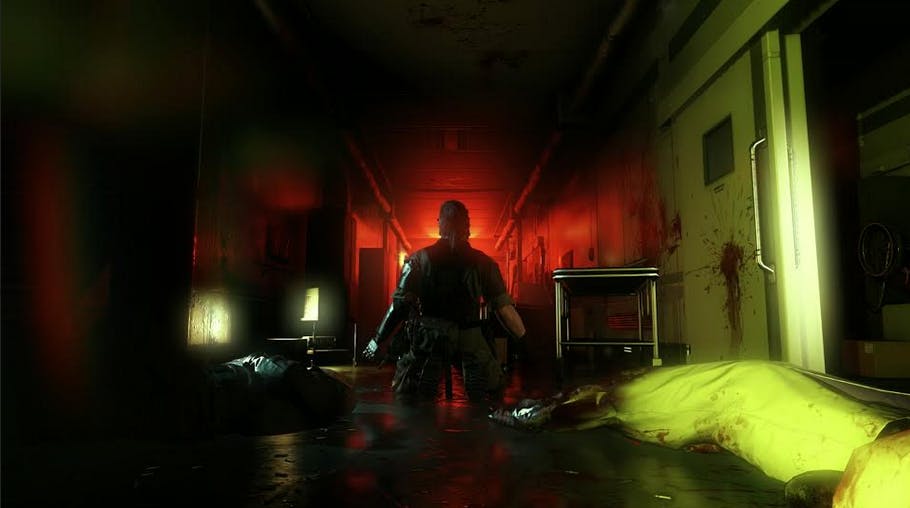 In The Phantom Pain, Hideo Kojima and Kojima Productions have pulled off the rarest kind of balancing act, delivering a story that will satisfy many franchise fans while also being the most beginner-accessible Metal Gear game to date. However approachable, its gameplay is the furthest thing from a “gateway” experience for the rest of the series. If any aspect of The Phantom Pain can motivate newcomers to go back to the older games, it’ll be with its plot, not with its gameplay, especially when the fixed camera of prior games can feel restrictive in contrast to The Phantom Pain.

If it turns out that this is Hideo Kojima’s last Metal Gear (at least in a directorial capacity), he fittingly ties off his involvement close to where he began, at least from a narrative standpoint. While there are threads linking back to the very first Metal Gear, there are stories that can still be told to help tee up Solid Snake’s inaugural mission, Operation Intrude N313. The Phantom Pain’s story, the ending, and its place in Metal Gear lore will be a point of contention for fans for the indefinite future. It’s best tailored for fans who can look past the odd age, gender, and narrative inconsistencies of prior games and accept that retconning is a minor concession in series known for batshit plot developments and supernatural enemies.

Aside from being a mildly engrossing troop management feature, Mother Base acts as a narrative precursor to Big Boss’ Outer Heaven fortress. It’s just one of a number of key elements in The Phantom Pain that adds gravitas to the events that preceded this chapter in Big Boss’ story—and the known Metal Gear-related incidents that have yet to come. It takes talent to make the player think that a game director is “phoning in” a story only to realize later that every narrative beat had some degree of meaning. It’s only when I completed the story that I realized that every scene that made me rub my chin in puzzlement is a proverbial breadcrumb that offers a new perspective upon second viewing. A couple revelations are even significant enough to make one rethink the series as a whole. This is one of those rare instances where marathoning a game series is more meaningful after the latest sequel is released, not before.

Disclosure: Our review copy of Metal Gear Solid V: The Phantom Pain on PlayStation 4 was provided courtesy of Konami. The first 40 hours of the playthrough took place at a 4-day review event hosted by Konami.