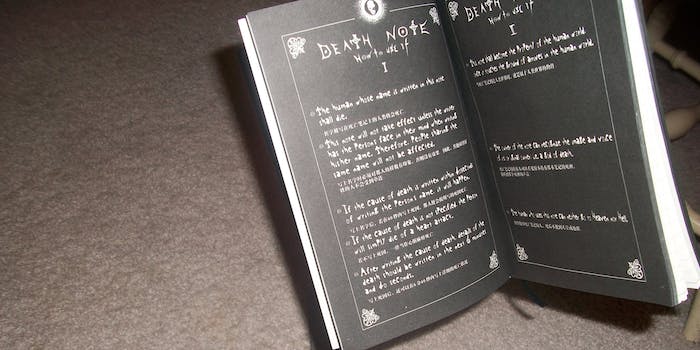 The latest minor scare is one of a number of recent incidents involving everyone's favorite lethal black book.

After fading into the background of pop culture scare myths in recent years, the “death note” is on the rise once again.

Death Note has been enjoying a headline-making year, with a new stage musical, a recent live-action TV series, an upcoming film sequel in Japan, and the long-stalled U.S. film adaptation finally going into production with a new director and lead actor. The blockbuster horror manga and anime has spent more time in the public eye than at any time since its first film run in 2008.

But with that recent spate of publicity has come an apparent increase in the number of students mimicking the fictional death note—and its supernatural ability to kill anyone whose name is written in it—in real-life incidents in their schools.

Last week, officials in Nashua, New Hampshire, held a public meeting to reassure parents and students who were concerned about the discovery of a “death note” owned by a female high school student. The list contained the names of 17 other students along with their respective causes of death. In Death Note, writing down the name of the target along with their cause of death in the death note causes them to die of that cause.

The incident is at least the fifth widely reported Death Note-related incident to occur in the U.S. in 2015, up from two incidents last year and one the year before:

In 2014, incidents occurred in Collierville, Tennessee, and Florence, Arizona. As the Comic Book League Defense Fund noted in the latter instance, “The media reports refer to the student’s list as a ‘hit list,’ while acknowledging in the same breath that there were no direct or implied threats in the document.”

In 2013, an Ohio middle school student was suspended after authorities found a version of a death note which he created “to vent his anger” against a teacher.

In each of these incidents, authorities cautioned there was no immediate danger, and no serious intent to act on the threats was discussed by police. In the most recent incident, a parent also reported that the teen who owned the list reached out to the woman’s daughter on Facebook to apologize and assure her that no danger was ever intended.

“Copycat” incidents related to Death Note in schools peaked between 2007 and 2008, when the anime reached mass popularity overseas and the two film adaptations of the manga were released in Japan and the U.S.  Since then, incidents been on the wane, until the recent franchise activity put Death Note back in the minds of teenagers.

With national concern about school violence, its easy to see how copycat death notes raise alarm, especially for parents, educators, and media outlets that are unfamiliar with the popular manga. But in cases reported thus far, it appears the notes have been harmless imitations, similar to a student creating a version of the Mean Girls‘ “burn book.”

But that hasn’t stopped some from targeting Death Note for censorship. In 2010, a New Mexico parents group attempted to ban the series in local public schools; in 2013, a Russian parents group asked the government to do likewise. Though neither attempt was successful, Chinese officials did issue a sweeping ban on numerous manga and anime including Death Note earlier this year.

With the revived interest in the franchise, it’s likely we haven’t seen the last of controversy surrounding this little black book.